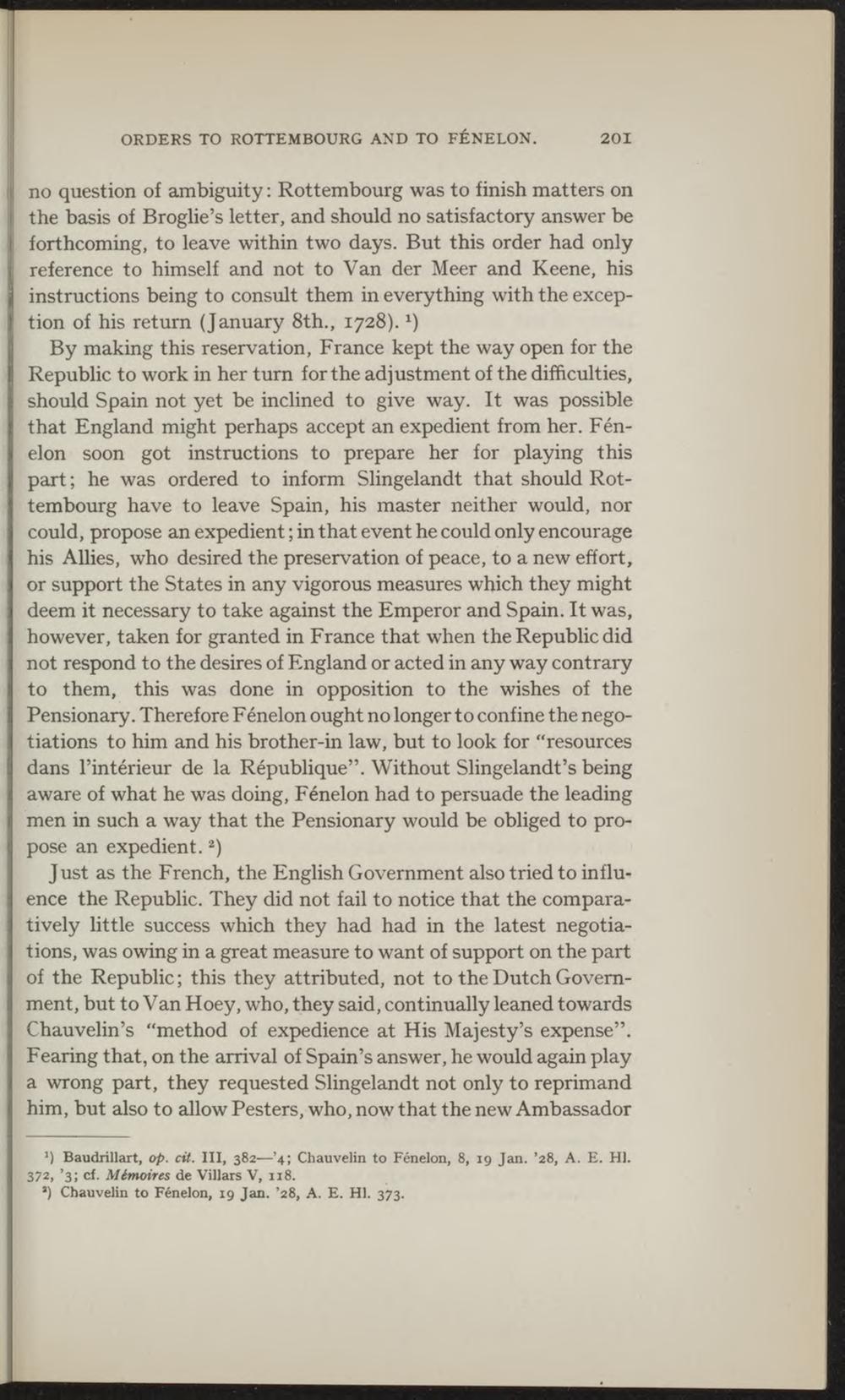 no question of ambiguity: Rottembourg was to finish matters on the basis of Broglie's letter, and should no satisfactory answer be forthcoming, to leave within two days. But this order had only reference to himself and not to Van der Meer and Keene, his instructions being to consult them in everything with the exception of his return (January 8th., 1728).x)

By malcing this reservation, France kept the way open for the Republic to work in her turn for the adjustment of the difficulties, should Spain not yet be inclined to give way. It was possible that England might perhaps accept an expedient from her. Fénelon soon got instructions to prepare her for playing this part; he was ordered to inform Slingelandt that should Rottembourg have to leave Spain, his master neither would, nor could, propose an expedient; in that event he could only encourage his Allies, who desired the preservation of peace, to a new effort, or support the States in any vigorous measures which they might deem it necessary to take against the Emperor and Spain. It was, however, taken for granted in France that when the Republic did not respond to the desires of England or acted in any way contrary to them, this was done in opposition to the wishes of the Pensionary. Therefore Fénelon ought no longer to confine the negotiations to him and his brother-in law, but to look for "resources dans 1'intérieur de la République". Without Slingelandt's being aware of what he was doing, Fénelon had to persuade the leading men in such a way that the Pensionary would be obliged to propose an expedient.2)

Just as the French, the English Government also triedto influence the Republic. They did not fail to notice that the comparatively little success which they had had in the latest negotiations, was owing in a great measure to want of support on the part of the Republic; this they attributed, not to the Dutch Government, but to Van Hoey, who, they said, continually leaned towards Chauvelin's "method of expedience at His Majesty's expense". Fearing that, on the arrival of Spain's answer, he would again play a wrong part, they requested Slingelandt not only to reprimand him, but also to allow Pesters, who, now that the new Ambassador