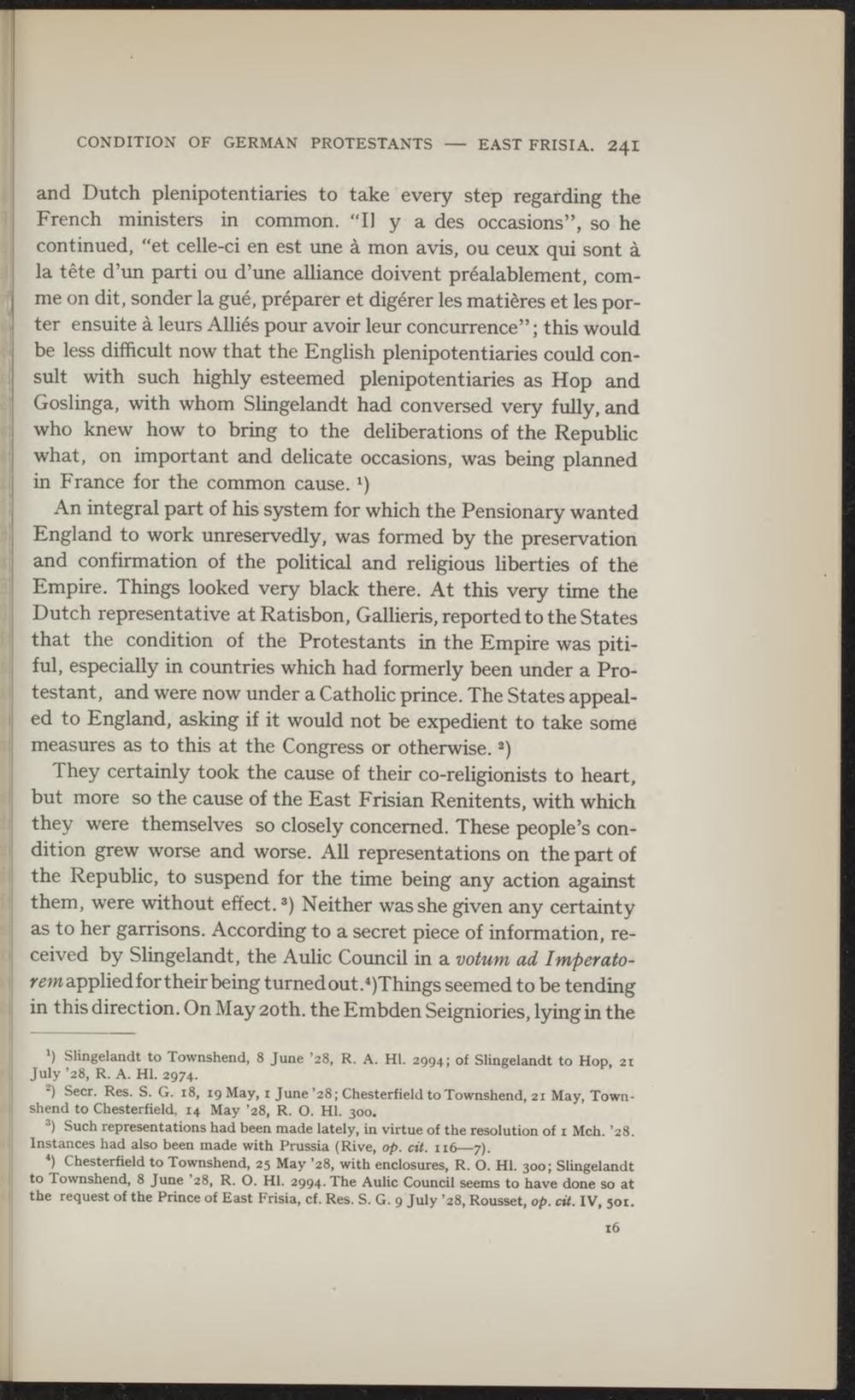 and Dutch plenipotentiaries to take every step regarding the

French ministers in common. "II y a des occasions", so he continued, "et celle-ci en est une a mon avis, ou ceux qui sont a la tête d'un parti ou d'une alliance doivent préalablement, comme on dit, sonder la gué, préparer et digérer les matières et les porter ensuite a leurs Alliés pour avoir leur concurrence"; this would be less difficult now that the English plenipotentiaries could consult with such highly esteemed plenipotentiaries as Hop and Goslinga, with whom Slingelandt had conversed very fully, and who knew how to bring to the deliberations of the Republic what, on important and delicate occasions, was being planned in France for the common cause.*)

An integral part of his system for which the Pensionary wanted England to work unreservedly, was formed by the preservation and confirmation of the political and religious liberties of the Empire. Things looked very black there. At this very time the Dutch representative at Ratisbon, Gallieris, reported to the States that the condition of the Protestants in the Empire was pitiful, especially in countries which had formerly been under a Protestant, and were now under a Catholic prince. The States appealed to England, asking if it would not be expedient to take some measures as to this at the Congress or otherwise.2)

They certainly took the cause of their co-religionists to heart, but more so the cause of the East Frisian Renitents, with which they were themselves so closely concerned. These people's condition grew worse and worse. All representations on the part of the Republic, to suspend for the time being any action against them, were without effect.3) Neither wasshe given any certainty as to her garrisons. According to a secret piece of information, received by Slingelandt, the Aulic Council in a votum ad Imperatorem applied for their being turnedout.4)Things seemed to be tending in this direction. On May 20th. the Embden Seigniories, lying in the

3) Such representations had been made lately, in virtue of the resolution of 1 Mch. '28. Instances had also been made with Prussia (Rive, op. cit. 116—7).