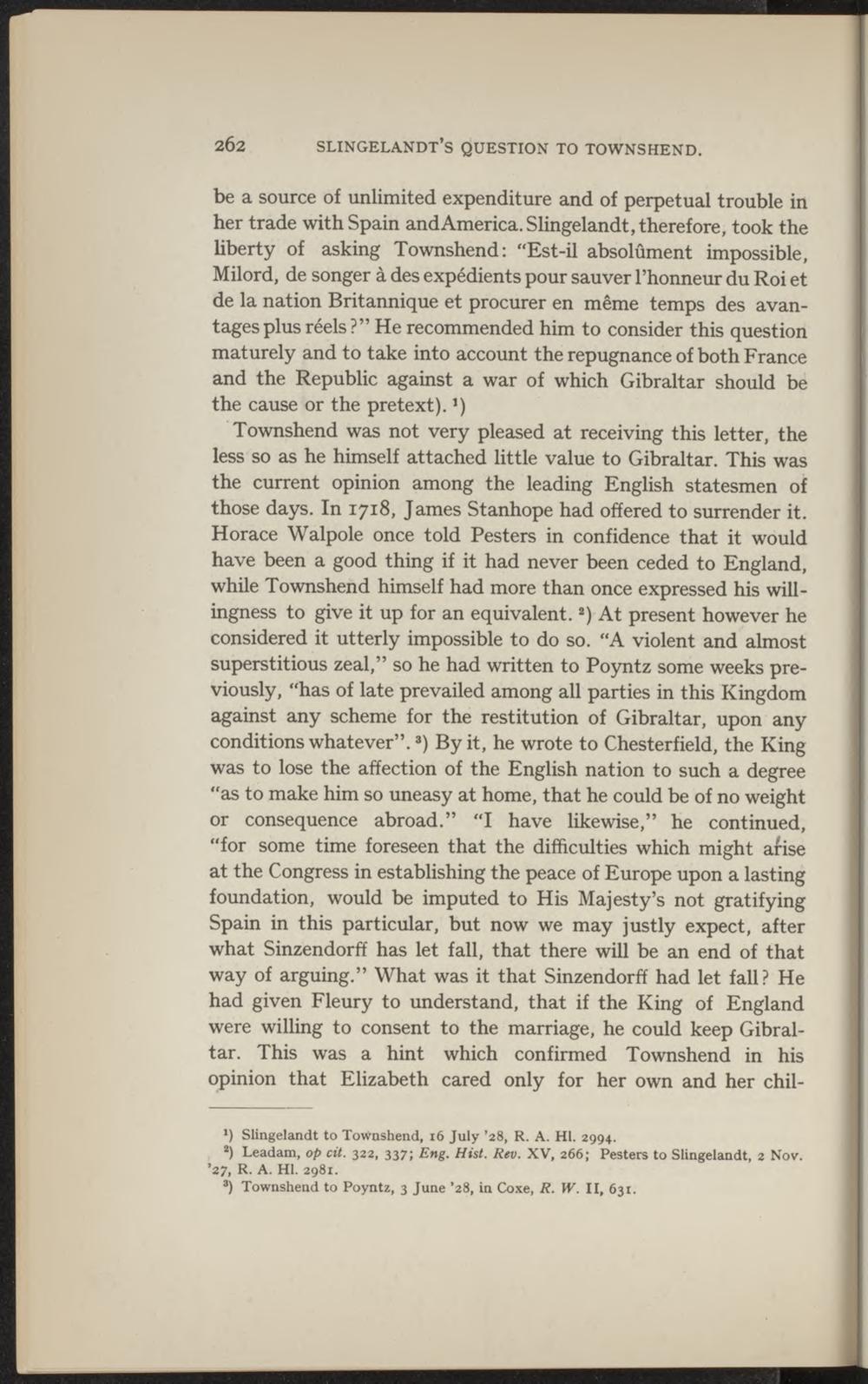 be a source of unlimited expenditure and of perpetual trouble in her trade with Spain and America. Slingelandt, therefore, took the liberty of asking Townshend: "Est-il absolüment impossible, Milord, de songer a des expédients pour sauver 1'honneur du Roi et de la nation Britannique et procurer en même temps des avantages plus réels ?" He recommended him to consider this question maturely and to take into account the repugnance of both France and the Republic against a war of which Gibraltar should be the cause or the pretext).')

Townshend was not very pleased at receiving this letter, the less so as he himself attached little value to Gibraltar. This was the current opinion among the leading English statesmen of those days. In 1718, James Stanhope had offered to surrender it. Horace Walpole once told Pesters in confidence that it would have been a good thing if it had never been ceded to England, while Townshend himself had more than once expressed his willingness to give it up for an equivalent.2) At present however he considered it utterly impossible to do so. "A violent and almost superstitious zeal," so he had written to Poyntz some weeks previously, "has of late prevailed among all parties in this Kingdom against any scheme for the restitution of Gibraltar, upon any conditions whatever".3) Byit, he wrote to Chesterfield, the King was to lose the affection of the English nation to such a degree "as to make him so uneasy at home, that he could be of no weight or consequence abroad." "I have likewise," he continued, "for some time foreseen that the difficulties which might arise at the Congress in establishing the peace of Europe upon a lasting foundation, would be imputed to His Majesty's not gratifying Spain in this particular, but now we may justly expect, after what Sinzendorff has let fall, that there will be an end of that way of arguing." What was it that Sinzendorff had let fall? He had given Fleury to understand, that if the King of England were willing to consent to the marriage, he could keep Gibraltar. This was a hint which confirmed Townshend in his opinion that Elizabeth cared only for her own and her chil-