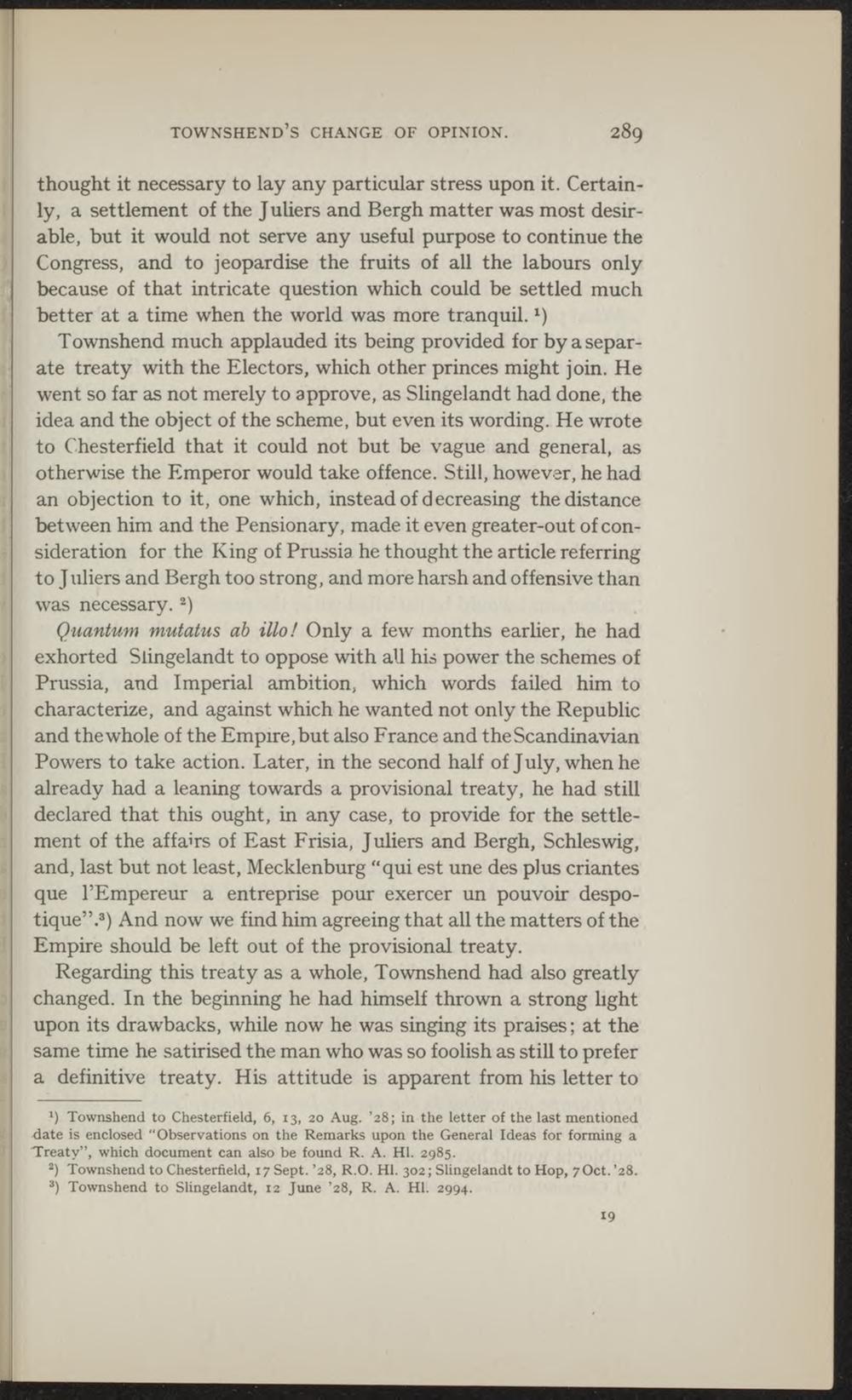 thought it necessary to lay any particular stress upon it. Certainly, a settlement of the J uliers and Bergh matter was most desirable, but it would not serve any useful purpose to continue the Congress, and to jeopardise the fruits of all the labours only because of that intricate question which could be settled much better at a time when the world was more tranquil.l)

Townshend much applauded its being provided for bya separate treaty with the Electors, which other princes might join. He went so far as not merely to approve, as Slingelandt had done, the idea and the object of the scheme, but even its wording. He wrote to Chesterfield that it could not but be vague and general, as otherwise the Emperor would take offence. Still, however, he had an objection to it, one which, instead of decreasing thedistance between him and the Pensionary, made it even greater-out of consideration for the King of Prussia he thought the article referring to Juliers and Bergh too strong, and more harsh and offensive than was necessary.2)

Quantum mutatus ab illo! Only a few months earlier, he had exhorted Slingelandt to oppose with all hid power the schemes of Prussia, and Imperial ambition, which words failed him to characterize, and against which he wanted not only the Republic and thewhole of the Empire,but also France and theScandinavian Powers to take action. Later, in the second half of July, when he already had a leaning towards a provisional treaty, he had still declared that this ought, in any case, to provide for the settlement of the affa'rs of East Frisia, Juliers and Bergh, Schleswig, and, last but not least, Mecklenburg "qui est une des plus criantes que 1'Empereur a entreprise pour exercer un pouvoir despotique".3) And now we find him agreeing that all the matters of the Empire should be left out of the provisional treaty.

Regarding this treaty as a whole, Townshend had also greatly changed. In the beginning he had himself thrown a strong light upon its drawbacks, while now he was singing its praises; at the same time he satirised the man who was so foolish as still to prefer a definitive treaty. His attitude is apparent from his letter to

x) Townshend to Chesterfield, 6, 13, 20 Aug. '28; in the letter of the last mentioned date is enclosed "Observations on the Remarks upon the General Ideas for forming a Treaty", which document can also be found R. A. Hl. 2985.