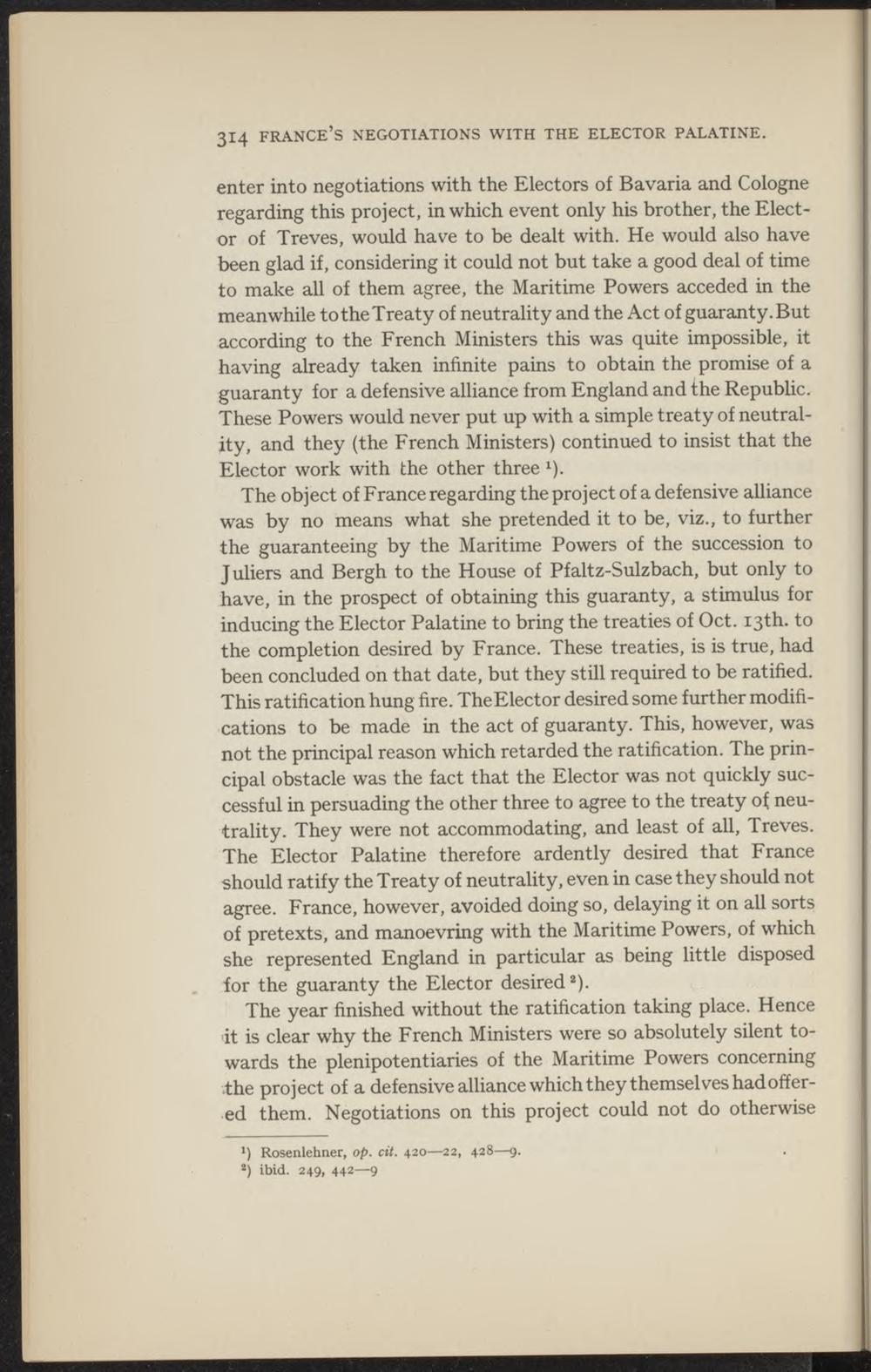 enter into negotiations with the Electors of Bavaria and Cologne regarding this project, in which event only his brother, the Elector of Treves, would have to be dealt with. He would also have been glad if, considering it could not but take a good deal of time to make all of them agree, the Maritime Powers acceded in the meanwhile totheTreaty of neutrality and the Act of guaranty. But according to the French Ministers this was quite impossible, it having already taken infinite pains to obtain the promise of a guaranty for a defensive alliance from England and the Republic. These Powers would never put up with a simple treaty of neutrality, and they (the French Ministers) continued to insist that the Elector work with the other three L).

The object of France regarding the project of a defensive alliance was by no means what she pretended it to be, viz., to further the guaranteeing by the Maritime Powers of the succession to Juliers and Bergh to the House of Pfaltz-Sulzbach, but only to have, in the prospect of obtaining this guaranty, a stimulus for inducing the Elector Palatine to bring the treaties of Oct. i3th. to the completion desired by France. These treaties, is is true, had been concluded on that date, but they still required to be ratified. This ratification hung fire. TheElector desired some further modifications to be made in the act of guaranty. This, however, was not the principal reason which retarded the ratification. The principal obstacle was the fact that the Elector was not quickly successful in persuading the other three to agree to the treaty of neutrality. They were not accommodating, and least of all, Treves. The Elector Palatine therefore ardently desired that France should ratify the Treaty of neutrality, even in case they should not agree. France, however, avoided doing so, delaying it on all sorts of pretexts, and manoevring with the Maritime Powers, of which she represented England in particular as being little disposed for the guaranty the Elector desired2).

The year finished without the ratification taking place. Hence it is clear why the French Ministers were so absolutely silent towards the plenipotentiaries of the Maritime Powers concerning the project of a defensive alliance which they themselveshadoffered them. Negotiations on this project could not do otherwise