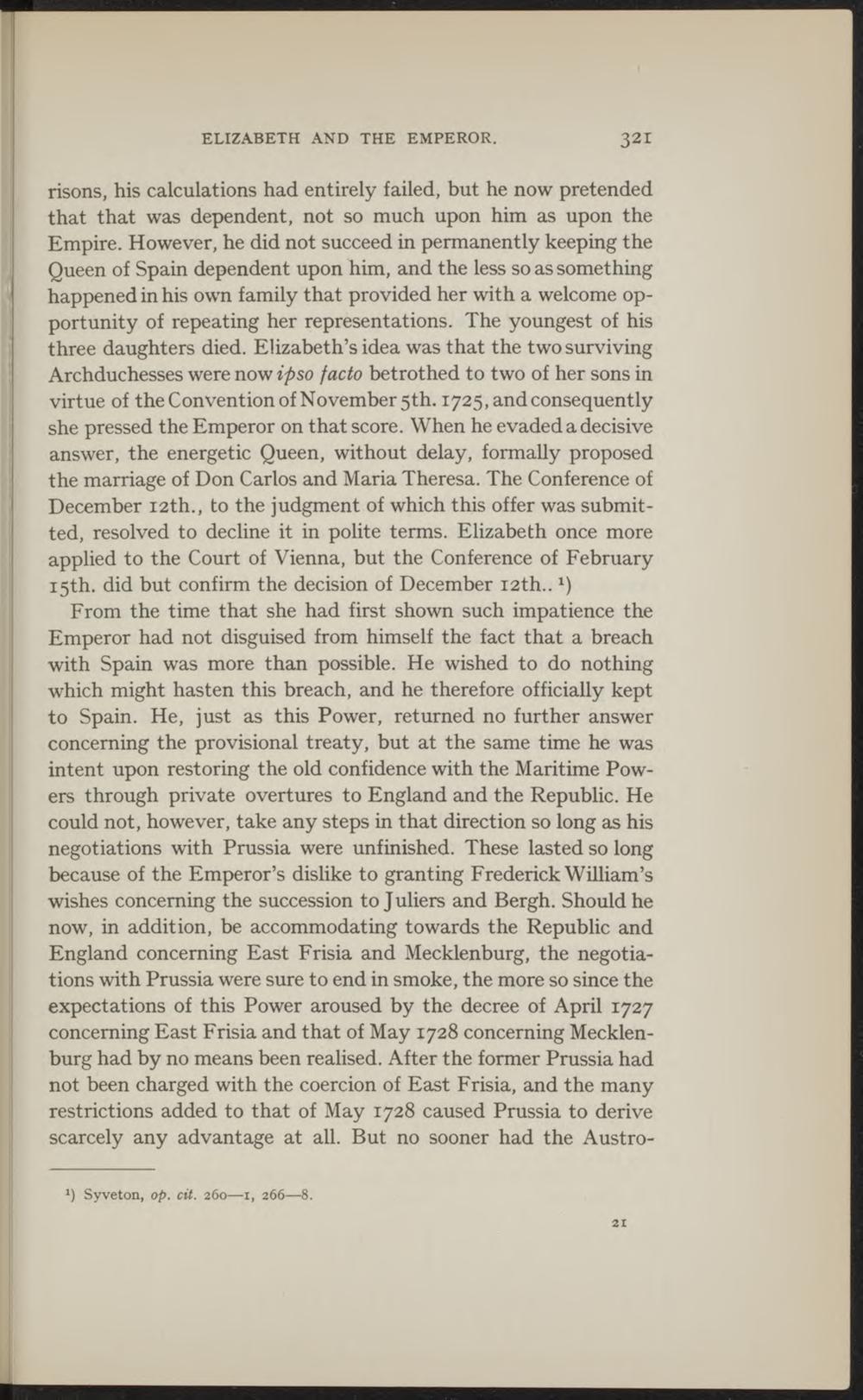 risons, his calculations had entirely failed, but he now pretended that that was dependent, not so much upon him as upon the Empire. However, he did not succeed in permanently keeping the Queen of Spain dependent upon him, and the less so as something happened in his own family that provided her with a welcome opportunity of repeating her representations. The youngest of his three daughters died. Elizabeth's idea was that the twosurviving Archduchesses were now ipso facto betrothed to two of her sons in virtue of the Convention of November 5th. 1725, and consequently she pressed the Emperor on that score. When he evadedadecisive answer, the energetic Queen, without delay, formally proposed the marriage of Don Carlos and Maria Theresa. The Conference of December i2th., to the judgment of which this offer was submitted, resolved to decline it in polite terms. Elizabeth once more applied to the Court of Vienna, but the Conference of February i5th. did but confirm the decision of December i2th..x)

From the time that she had first shown such impatience the Emperor had not disguised from himself the fact that a breach with Spain was more than possible. He wished to do nothing which might hasten this breach, and he therefore officially kept to Spain. He, just as this Power, returned no further answer concerning the provisional treaty, but at the same time he was intent upon restoring the old confidence with the Maritime Powers through private overtures to England and the Republic. He could not, however, take any steps in that direction so long as his negotiations with Prussia were unfinished. These lasted so long because of the Emperor's dislike to granting Frederick William's wishes concerning the succession to J uliers and Bergh. Should he now, in addition, be accommodating towards the Republic and England concerning East Frisia and Mecklenburg, the negotiations with Prussia were sure to end in smoke, the more so since the expectations of this Power aroused by the decree of April 1727 concerning East Frisia and that of May 1728 concerning Mecklenburg had by no means been realised. Af ter the former Prussia had not been charged with the coercion of East Frisia, and the many restrictions added to that of May 1728 caused Prussia to derive scarcely any advantage at all. But no sooner had the Austro-