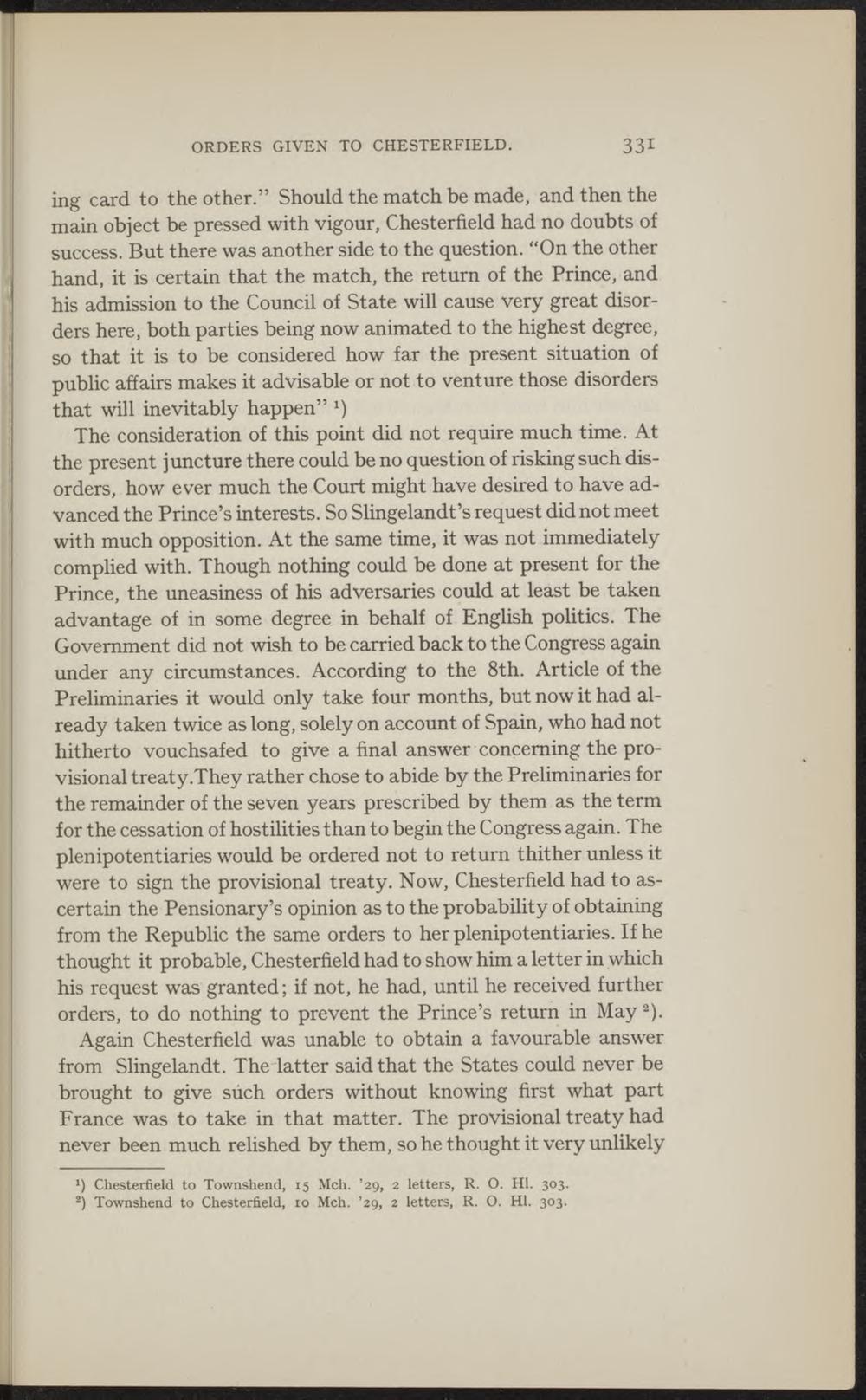 ing card to the other." Should the match be made, and then the main object be pressed with vigour, Chesterfield had no doubts of success. But there was another side to the question. "On the other hand, it is certain that the match, the return of the Prince, and his admission to the Council of State will cause very great disorders here, both parties being now animated to the highest degree, so that it is to be considered how far the present situation of public affairs makes it advisable or not to venture those disorders that will inevitably happen" x)

The consideration of this point did not require much time. At the present juncture there could be no question of risking such disorders, how ever much the Court might have desired to have advanced the Prince's interests. So Slingelandt's request did not meet with much opposition. At the same time, it was not immediately complied with. Though nothing could be done at present for the Prince, the uneasiness of his adversaries could at least be taken advantage of in some degree in behalf of English politics. The Government did not wish to be carried back to the Congress again under any circumstances. According to the 8th. Article of the Preliminaries it would only take four months, but now it had already taken twice as long, solely on account of Spain, who had not hitherto vouchsafed to give a final answer concerning the provisional treaty.They rather chose to abide by the Preliminaries for the remainder of the seven years prescribed by them as the term for the cessation of hostilities than to begin the Congress again. The plenipotentiaries would be ordered not to return thither unless it were to sign the provisional treaty. Now, Chesterfield had to ascertain the Pensionary's opinion as to the probability of obtaining from the Republic the same orders to her plenipotentiaries. If he thought it probable, Chesterfield had to show hima letter in which his request was granted; if not, he had, until he received further orders, to do nothing to prevent the Prince's return in May 2).

Again Chesterfield was unable to obtain a favourable answer from Slingelandt. The latter saidthat the States could never be brought to give süch orders without knowing first what part France was to take in that matter. The provisional treaty had never been much relished by them, sohe thought it very unlikely