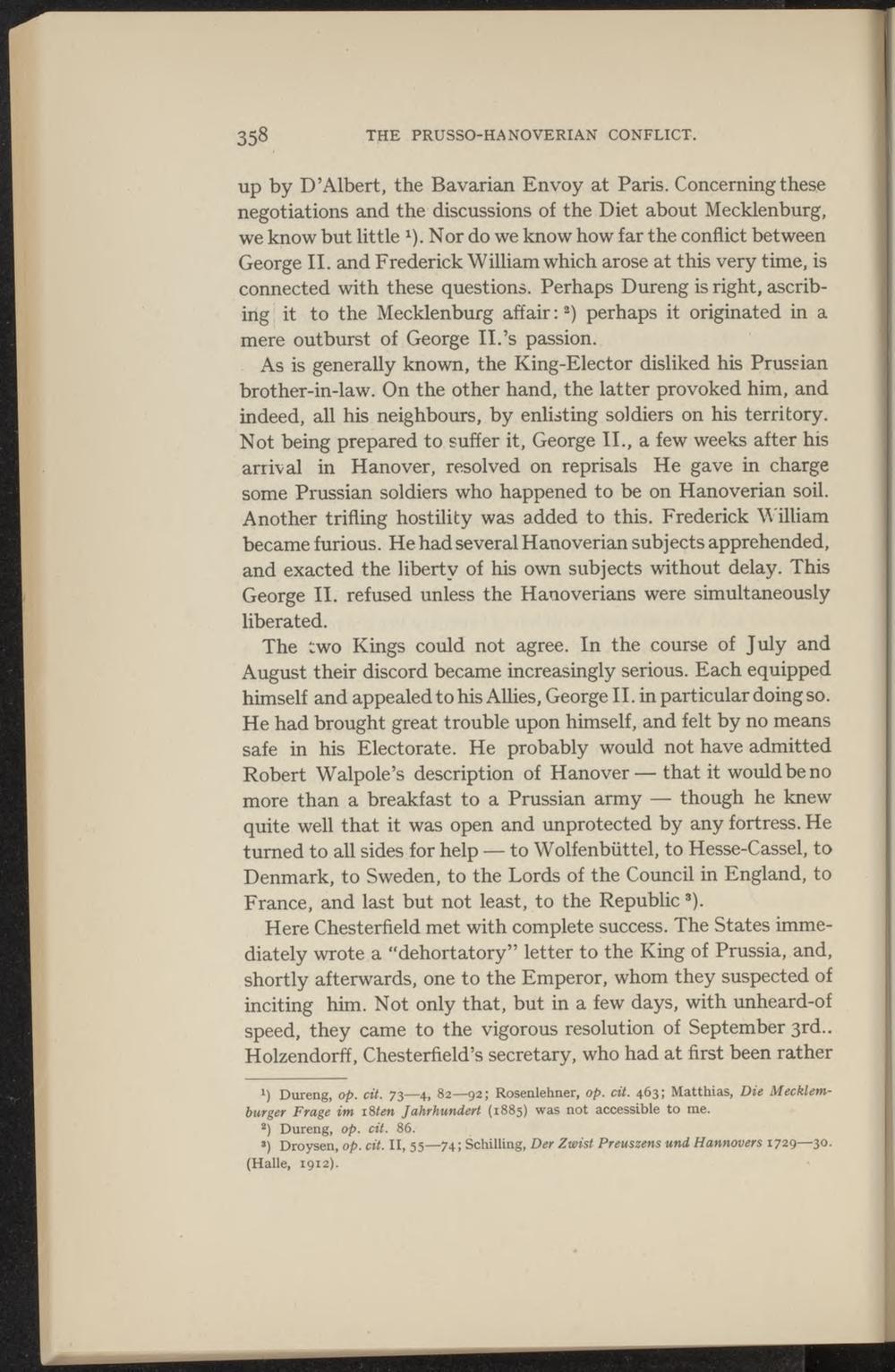 up by D'Albert, the Bavarian Envoy at Paris. Concerning these negotiations and the discussions of the Diet about Mecklenburg, we know but little 1). Nor do we know how far the conflict between George II. and Frederick William which arose at this very time, is connected with these questions. Perhaps Dureng is right, ascribing it to the Mecklenburg affair:2) perhaps it originated in a mere outburst of George II.'s passion.

As is generally known, the King-Elector disliked his Prussian brother-in-law. On the other hand, the lat ter provoked him, and indeed, all his neighbours, by enlisting soldiers on his territory. Not being prepared to suffer it, George II., a few weeks after his arm al in Hanover, resolved on reprisals He gave in charge some Prussian soldiers who happened to be on Hanoverian soil. Another trifling hostility was added to this. Frederick William became furious. He had several Hanoverian subjects apprehended, and exacted the libertv of his own subjects without delay. This George II. refused unless the Hanoverians were simultaneously liberated.

The ïwo Kings could not agree. In the course of July and August their discord became increasingly serious. Each equipped himself and appealed to his Allies, George II. in particular doing so. He had brought great trouble upon himself, and feit by no means safe in his Electorate. He probably would not have admitted Robert Walpole's description of Hanover — that it would ben o more than a breakfast to a Prussian army — though he knew quite well that it was open and unprotected by any fortress. He turned to all sides for help — to Wolfenbüttel, to Hesse-Cassel, to Denmark, to Sweden, to the Lords of the Council in England, to France, and last but not least, to the Republic 3).

Here Chesterfield met with complete success. The States immediately wrote a "dehortatory" letter to the King of Prussia, and, shortly afterwards, one to the Emperor, whom they suspected of inciting him. Not only that, but in a few days, with unheard-of speed, they came to the vigorous resolution of September 3rd.. Holzendorff, Chesterfield's secretary, who had at first been rather