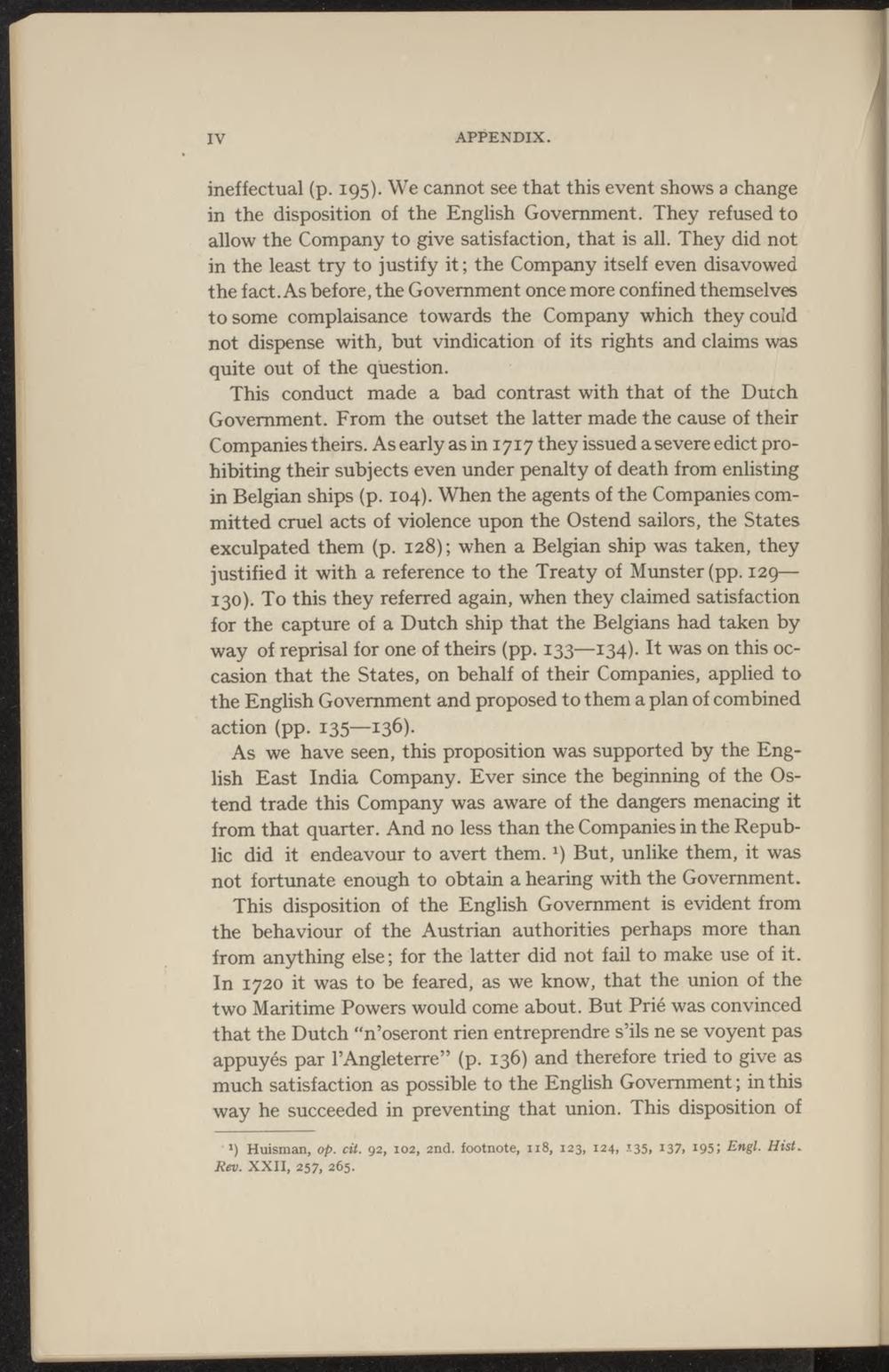 ineffectual (p. 195). We cannot see that this event shows a change in the disposition of the English Government. They refused to allow the Company to give satisfaction, that is all. They did not in the least try to justify it; the Company itself even disavowed the fact. As before, the Government once more confined themselves to some complaisance towards the Company which they could not dispense with, but vindication of its rights and claims was quite out of the question.

This conduct made a bad contrast with that of the Dutch Government. From the outset the latter made the cause of their Companies theirs. As early as in 1717 they issued a severe edict prohibiting their subjects even under penalty of death from enlisting in Belgian ships (p. 104). When the agents of the Companies committed cruel acts of violence upon the Ostend sailors, the States exculpated them (p. 128); when a Belgian ship was taken, they justified it with a reference to the Treaty of Munster (pp. 129— 130). To this they referred again, when they claimed satisfaction for the capture of a Dutch ship that the Belgians had taken by way of reprisal for one of theirs (pp. 133—134). It was on this occasion that the States, on behalf of their Companies, applied to the English Government and proposed to them a plan of combined action (pp. 135—136)-

As we have seen, this proposition was supported by the English East India Company. Ever since the beginning of the Ostend trade this Company was aware of the dangers menacing it from that quarter. And no less than the Companies in the Republic did it endeavour to avert them.x) But, unlike them, it was not fortunate enough to obtain a hearing with the Government.

This disposition of the English Government is evident from the behaviour of the Austrian authorities perhaps more than from anything else; for the latter did not fail to make use of it. In 1720 it was to be feared, as we know, that the union of the two Maritime Powers would come about. But Prié was convinced that the Dutch "n'oseront rien entreprendre s'ils ne se voyent pas appuyés par 1'Angleterre" (p. 136) and therefore tried to give as much satisfaction as possible to the English Government; in this way he succeeded in preventing that union. This disposition of