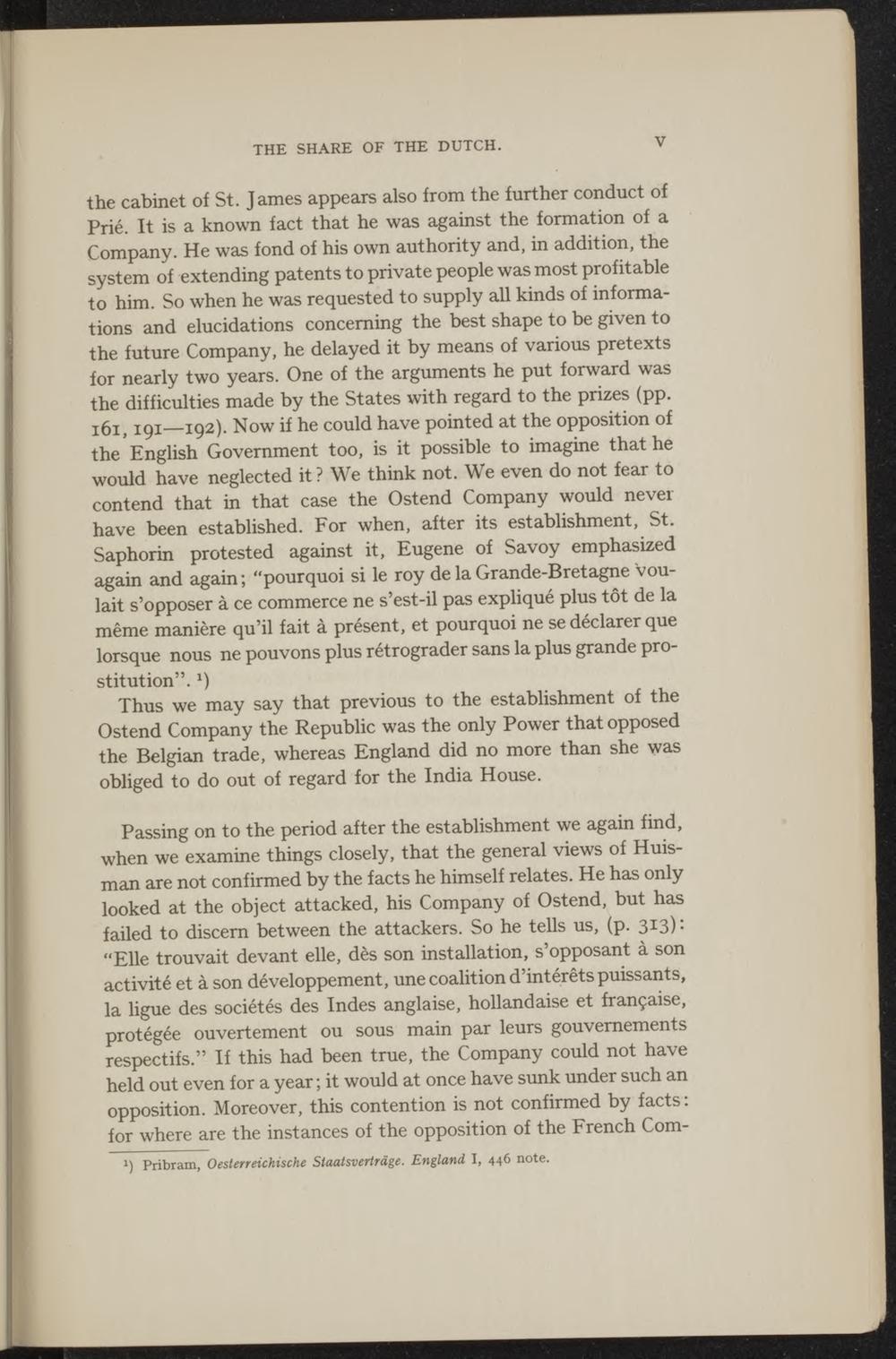 the cabinet of St. James appears also from the further conduct of Prié. It is a known fact that he was against the formation of a Company. He was fond of his own authority and, in addition, the system of extending patents to private people was most profitable to him. So when he was requested to supply all kinds of informations and elucidations concerning the best shape to be given to the future Company, he delayed it by means of various pretexts for nearly two years. One of the arguments he put forward was the difficulties made by the States with regard to the prizes (pp. 161, 191—192). Now if he could have pointed at the opposition of the English Government too, is it possible to imagine that he would have neglected it? We think not. We even do not fear to contend that in that case the Ostend Company would nevei have been established. For when, after its establishment, St. Saphorin protested against it, Eugene of Savoy emphasized again and again; "pourquoi si le roy de la Grande-Bretagne voulait s'opposer a ce commerce ne s'est-il pas expliqué plus tot de la même manière qu'il fait a présent, et pourquoi ne se déclarer que lorsque nous ne pouvons plus rétrograder sans la plus grande pro stitution".')

Thus we may say that previous to the establishment of the Ostend Company the Republic was the only Power thatopposed the Belgian trade, whereas England did no more than she was obliged to do out of regard for the India House.

Passing on to the period after the establishment we again find, when we examine things closely, that the general views of Huisman are not confirmed by the facts he himself relates. He has only looked at the object attacked, his Company of Ostend, but has failed to discern between the attackers. So he tells us, (p. 313): "Elle trouvait devant elle, dès son installation, s'opposant a son activité et a son développement, une coalition d'intérêts puissants, la ligue des sociétés des Indes anglaise, hollandaise et fran9aise, protégée ouvertement ou sous main par leurs gouvernements respectifs." If this had been true, the Company could not have held out even for a year; it would at once have sunk under such an opposition. Moreover, this contention is not confirmed by facts. for where are the instances of the opposition of the French Com-