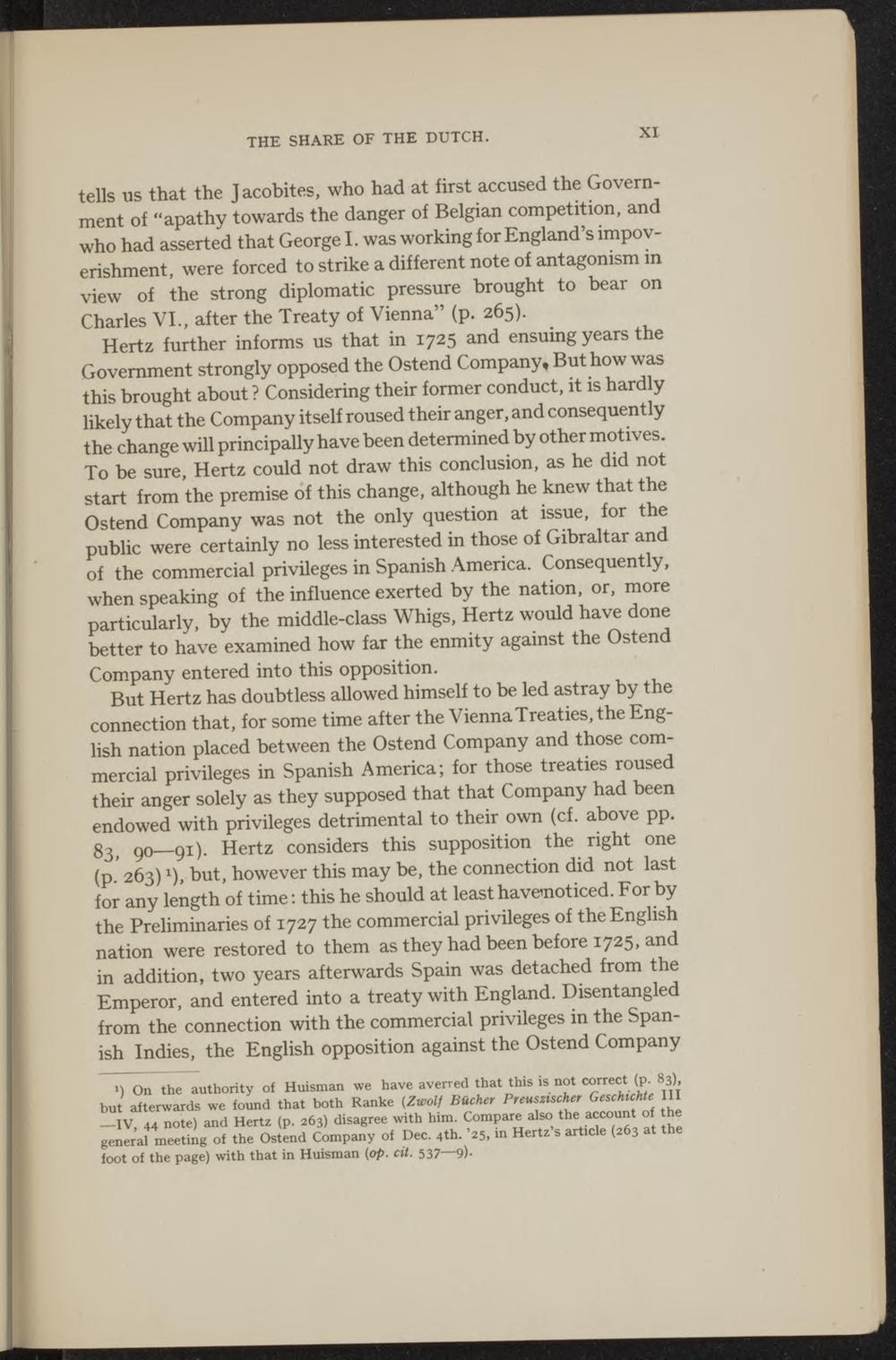 tells us that the Jacobites, who had at first accused the Government of "apathy towards the danger of Belgian competition, and who had asserted that George I. was working for England's impoverishment, were forced to strike a different note of antagonism in view of the strong diplomatic pressure brought to bear on Charles VI., after the Treaty of Vienna" (p. 265).

Hertz further informs us that in 1725 and ensumg years the Government strongly opposed the Ostend Company, But how was this brought about ? Considering their former conduct, ït is hardly likely that the Company itself roused their anger, and consequently the change will principally have been determined by other motives. To be sure, Hertz could not draw this conclusion, as he did not start from the premise of this change, although he knew that the Ostend Company was not the only question at issue, for the public were certainly no less interested in those of Gibraltar and of the commercial privileges in Spanish America. Consequently, when speaking of the influence exerted by the nation, or, more particularly, by the middle-class Whigs, Hertz would have done better to have examined how far the enmity against the Ostend Company entered into this opposition.

But Hertz has doubtless allowed himself to be led astray by t e connection that, for some time after the ViennaTreaties, the English nation placed between the Ostend Company and those commercial privileges in Spanish America; for those treaties roused their anger solely as they supposed that that Company had been endowed with privileges detrimental to their own (cf. above pp. g3) 90—91). Hertz considers this supposition the nght one (p 263)1), but, however this may be, the connection did not last for any length of time: this he should at least havcnoticed. For by the Preliminaries of 1727 the commercial privileges of theEnglish nation were restored to them as they had been before 1725, and in addition, two years afterwards Spain was detached from the Emperor, and entered into a treaty with England. Disentangled from the connection with the commercial privileges in the Spanish Indies, the English opposition against the Ostend Company

i) On the authority of Huisman we have averred that this is not correct (p. 83), but afterwards we found that both Ranke (Zwolf Bücher Preuszischer Geschichte III —IV, 44 note) and Hertz (p. 263) disagree with him. Compare also theaccounit othe general meeting of the Ostend Company of Dec. 4th. '25, in Hertz s article (263 at the foot of the page) with that in Huisman (op. cit. 537—9).