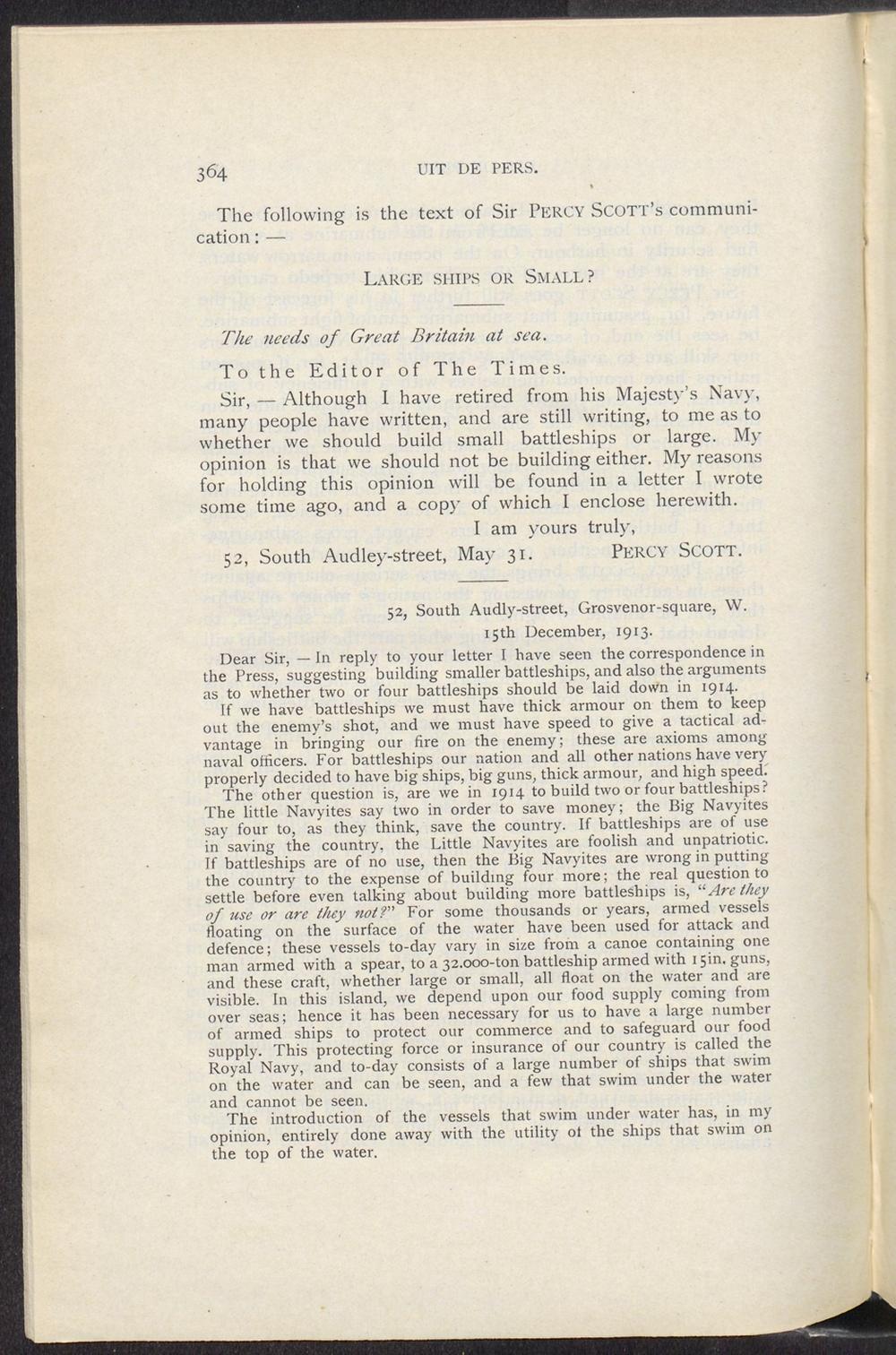 The following is the text of Sir percy Scott's communication: —

The needs of Great Britain at sea. To the Editor of The Times.

Sir, — Although I have retired from his Majesty's Navy, many people have written, and are still writing, to me as to whether we should build small battleships or large. My opinion is that we should not be building either. My reasons for holding this opinion will be found in a letter I wrote some time ago, and a copy of which I enclose herewith.

I am yours truly,

52, South Audly-street, Grosvenor-square, W. 15Ü1 December, 1913. Dear Sir, — In reply to your letter I have seen the correspondence in the Press, suggesting building smaller battleships, and also the arguments as to whether two or four battleships should be laid down in 1914.

If we have battleships we must have thick armour on them to keep out the enemy's shot, and we must have speed to give a tactical advantage in bringing our fire on the enemy; these are axioms among naval officers. For battleships our aation and all other nations have very properly decided to have big ships, big guns, thick armour, and high speed.

The other question is, are we in 1914 to build two or four battleships. The little Navyites say two in order to save money; the Big Navyites say four to, as they think, save the country. If battleships are of use in saving the country, the Little Navyites are foohsh and unpatnotic. If battleships are of no use, then the Big Navyites are wrong in putting the country to the expense of building four more; the real question to settle before even talking about building more battleships is, " Are they of use or are they not?" For some thousands or years, armed vessels floating on the surface of the water have been used for attack and defence; these vessels to-day vary in size from a canoe contaimng one man armed with a spear, to a 32.000-ton battleship armed with 1501, guns, and these craft, whether large or small, all float on the water and are visible. In this island, we depend upon our food supply coming from over seas; hence it has been necessary for us to have a large number of armed ships to protect our commerce and to safeguard our food supply. This protecting force or insurance of our country is called the Royal Navy, and to-day consists of a large number of ships that swim on the water and can be seen, and a few that swim under the water and cannot be seen.

The introduction of the vessels that swim under water has, in my opinion, entirely done away with the utility ot the ships that swim on the top of the water.