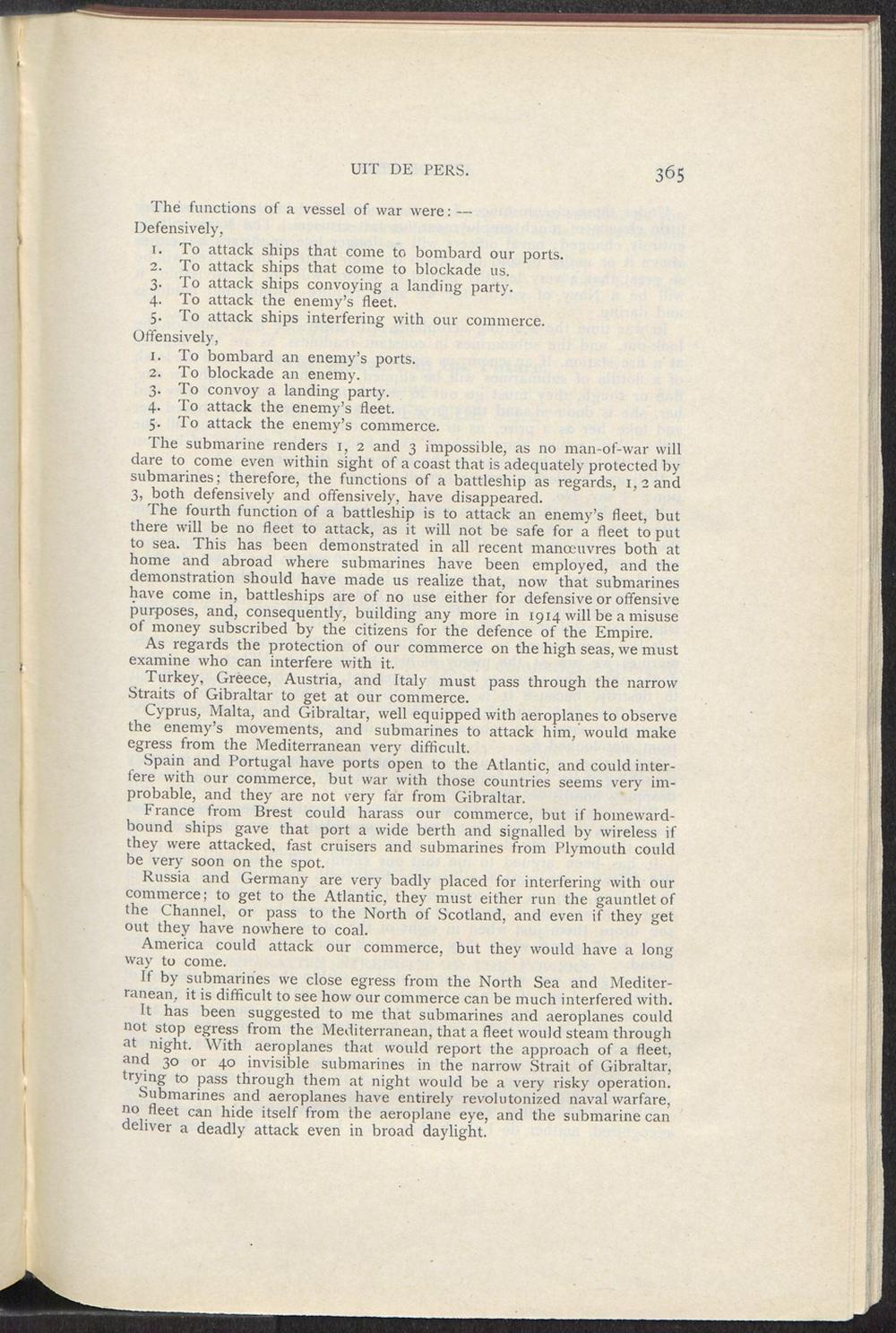 Thé functions of a vessel of war were: — Defensively,

1. To attack ships that come to bombard our ports.

2. To attack ships that come to blockade us.

4. To attack the enemy's fleet.

5. To attack ships interfering with our commerce. Offensively,

1. To bombard an enemy's ports.

2. To blockade an enemy.

3. To convoy a landing party.

4. To attack the enemy's fleet.

5. To attack the enemy's commerce.

The submarine renders 1, 2 and 3 impossible, as no man-of-war will dare to come even within sight of a coast that is adequately protected by submannes; therefore, the functions of a battleship as regards, 1,2 and 3, both defensively and offensively, have disappeared.

The fourth function of a battleship is to attack an enemy's fleet, but there will be no fleet to attack, as it will not be safe for a fleet to put to sea. This has been demonstrated in all recent manoeuvres both at home and abroad where submarines have been employed, and the demonstration should have made us realize that, now that submarines have come in, battleships are of no use either for defensive or offensive purposes, and, consequently, building any more in 1914 will be a misuse of money subscribed by the citizens for the defence of the Empire.

As regards the protection of our commerce on the high seas, we must examine who can interfere with it.

Turkey, Grèece, Austria, and Italy must pass through the narrow Straits of Gibraltar to get at our commerce.

Cyprus, Malta, and Gibraltar, well equipped with aeroplanes to observe the enemy's movements, and submarines to attack him,'would make egress from the Mediterranean very difficult.

Spain and Portugal have ports open to the Atlantic, and could interfere with our commerce, but war with those countries seems very improbable, and they are not very far from Gibraltar.

France from Brest could harass our commerce, but if homewardbound ships gave that port a wide berth and signalled by wireless if they were attacked, fast cruisers and submarines from Plymouth could be very soon on the spot.

Russia and Germany are very badly placed for interfering with our commerce; to get to the Atlantic, they must either run the gauntlet of the Channel, or pass to the North of Scotland, and even if they get out they have nowhere to coal.

America could attack our commerce, but they would have a long way to come.

If by submarines we close egress from the North Sea and Mediterranean, it is difficult to see how our commerce can be much interfered with.

It has been suggested to me that submarines and aeroplanes could not stop egress from the Mediterranean, that a fleet would steam through at night. With aeroplanes that would report the approach of a fleet. and 30 or 40 invisible submarines in the narrow Strait of Gibraltar^ trying to pass through them at night would be a very risky operation.

Submarines and aeroplanes have entirely revolutonized naval warfare, no fleet can hide itself from the aeroplane eye, and the submarine can deliver a deadly attack even in broad daylight.