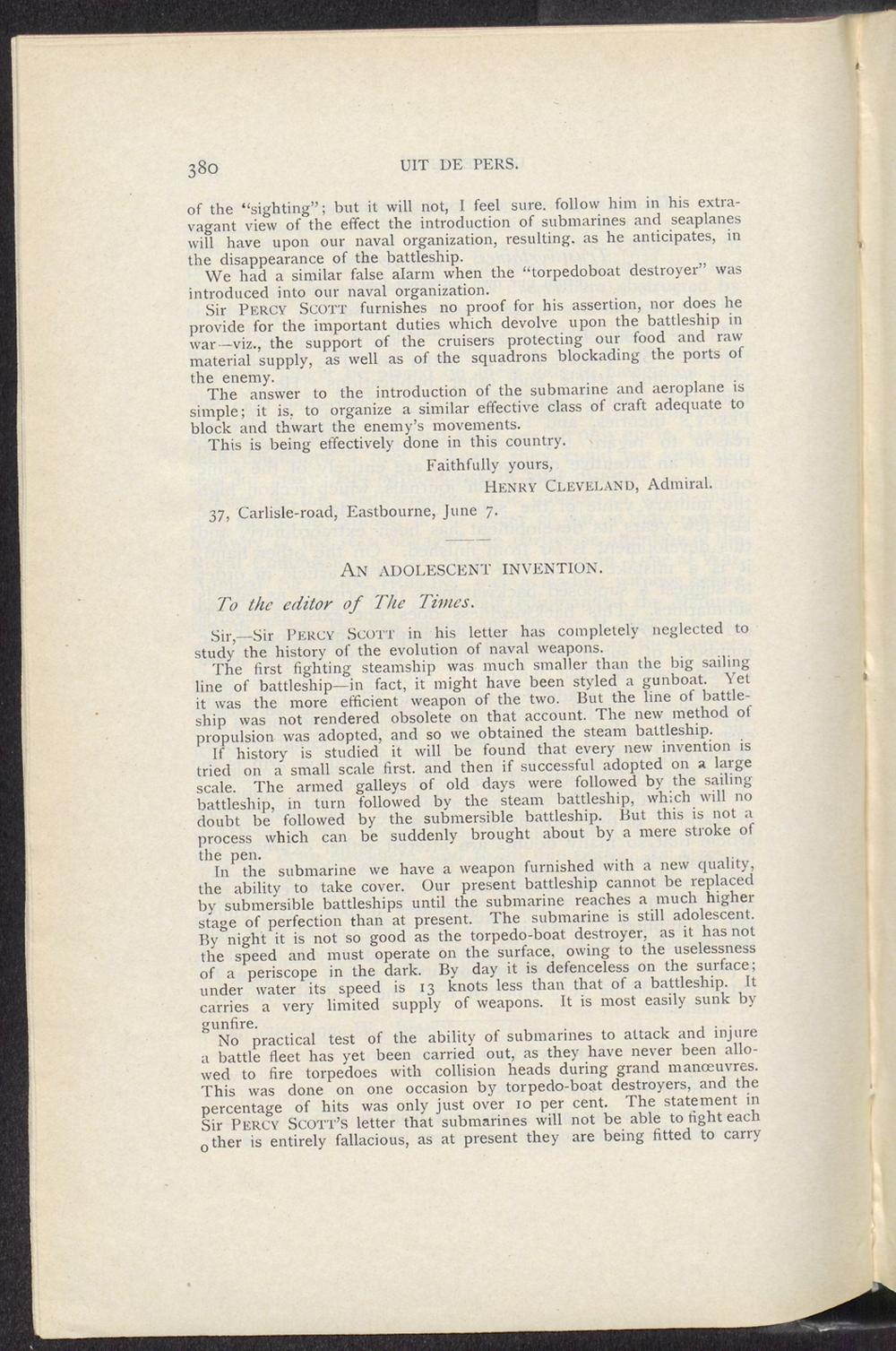 of the "sighting"; but it will not, I feel sure. follow him in his extravagant view of the effect the introduction of submarines and seaplanes will have upon our naval organization, resulting. as he anticipates, in the disappearance of the battleship.

We had a similar false alarm when the "torpedoboat destroyer was introduced into our naval organization.

Sir Percy Scott furnishes no proof for his assertion, nor does he provide for the important duties which devolve upon the battleship m war-viz., the support of the cruisers protecting our food and raw material supply, as well as of the squadrons blockading the ports ot the enemy. , .

The answer to the introduction of the submarine and aeroplane is simple; it is. to organize a similar effective class of craft adequate to block and thwart the enemy's movements.

This is being effectively done in this country.

To the editor of The Times.

Sir,—Sir Percy Scott in his letter has complelely neglected to study the history of the evolution of naval weapons.

The first fighting steamship was much smaller than the big sailmg line of battleship—in fact, it might have been styled a gunboat Yet it was the more efficiënt weapon of the two. But the line of battleship was not rendered obsolete on that account. The new method ot propulsion was adopted, and so we obtained the steam battleship.

If history is studied it will be found that every new invention is tried on a small scale first. and then if successful adopted on a large scale The armed galleys of old days were followed by the sailing battleship in turn followed by the steam battleship, which will 110 doubt be followed by the submersible battleship. But this is not a process which can be suddenly brought about by a mere stroke of the pen. , . ...

In the submarine we have a weapon furmshed with a new quality, the ability to take cover. Our present battleship cannot be replaced by submersible battleships until the submarine reaches a much higher stage of perfection than at present. The submarine is still adolescent. By night it is not so good as the torpedo-boat destroyer, as it has not the speed and must operate on the surface, owing to the uselessness of a periscope in the dark. By day it is defenceless on the surface; under water its speed is 13 knots less than that of a battleship It carries a very limited supply of weapons. It is most easily sunk by gunfire. . , , . ■

No practical test of the ability of submarines to attack and mjure a battle fleet has yet been carried out, as they have never been allowed to fire torpedoes with collision heads during grand manoeuvres. This was done on one occasion by torpedo-boat destroyers, and the percentage of hits was only just over 10 per cent. The statement in Sir Percy Scott's letter that submarines will not be able to hgnt eacn 0ther is entirely fallacious, as at present they are bemg fitted to carry