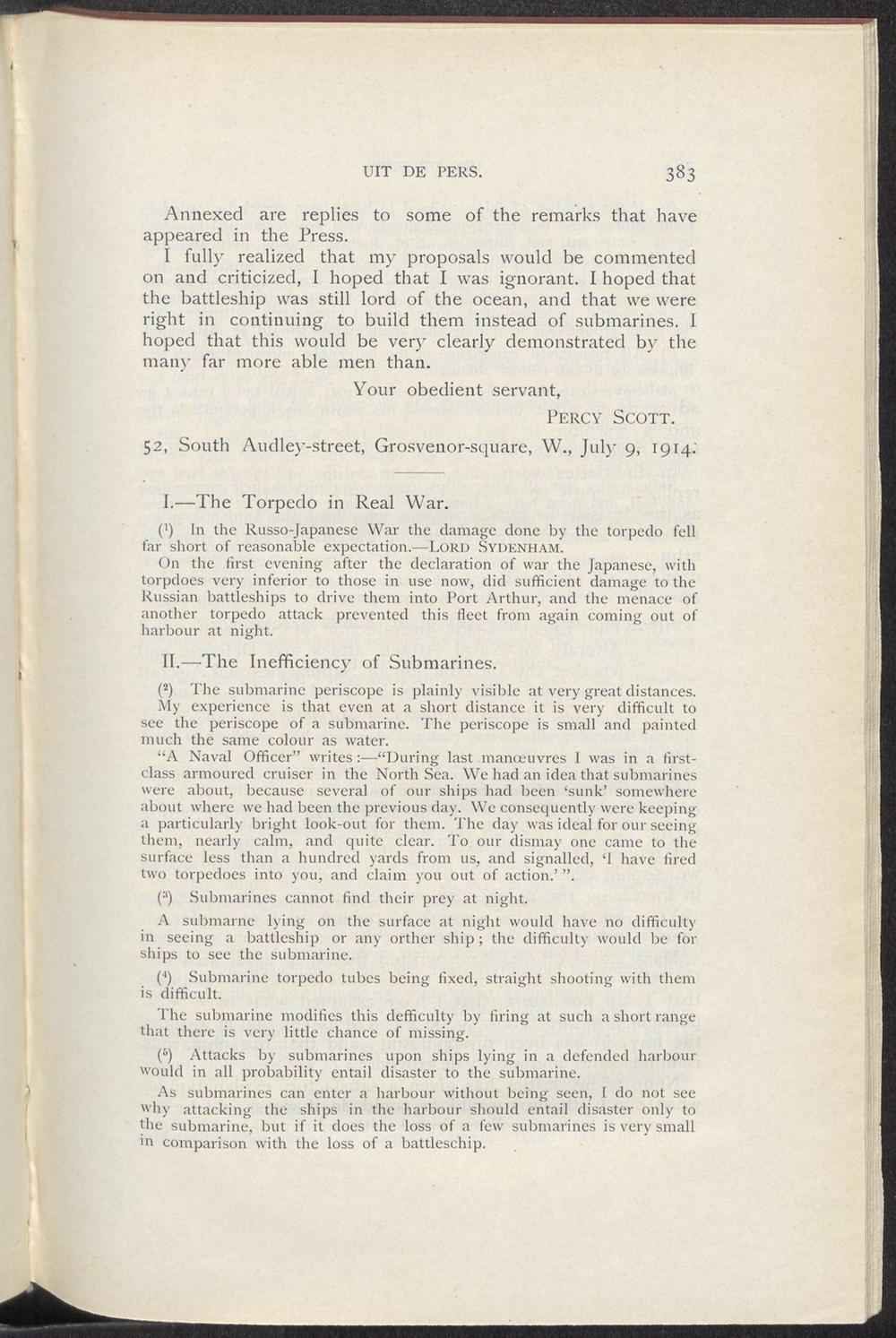 Annexed are replies to some of the remarks that have appeared in the Press.

I fully realized that my proposals would be commented on and criticized, I hoped that I was ignorant. I hoped that the battleship was still lord of the ocean, and that we were right in continuing to build them instead of submarines. I hoped that this would be ver)' clearly demonstrated by the man)- far more able men than.

I. —The Torpedo in Real War.

(') In the Russo-Japanese War the damage done by the torpedo feil far short of reasonable expectation.—Lord Sydknham.

On the first evening after the declaration of war the Japanese, with torpdoes very inferior to those in use now, did sufficiënt damage to the Russian battleships to drive them into Port Arthur, and the menace of another torpedo attack prevented this fleet from again coming out of harbour at night.

II. —The InefBciency of Submarines.

(2) The submarine pcriscope is plainly visible at very great distances.

My experience is that even at a short distance it is very difficult to see the periscope of a submarine. The pcriscope is small and painted much the same colour as water.

"A Naval Officer" writes :—"During last .manoeuvres I was in a firstclass armoured cruiser in the North Sea. We had an idea that submarines were about, becausc several of our ships had been 'sunk' somewhere about where we had been the previous day. We consequently were keeping a particularly bright look-out for them. The day was ideal for our seeing them, nearly calm, and quite clear. To our dismay one came to the surface less than a hundred yards from us, and signallcd, 'I have fired two torpedoes into you, and claim you out of action.' ".

A submarne lying on the surface at night would have no difficulty in seeing a battleship or any orthcr ship; the difficulty would be for ships to see the submarine.

(4) Submarine torpedo tubes being fixed, straight shooting with them is difficult.

The submarine modifics this defficulty by firing at such a short range that there is very little chancc of missing.

(5) Attacks by submarines upon ships lying in a defended harbour would in all probability entail disaster to the submarine.

As submarines can enter a harbour without being seen, I do not see why attacking the ships in the harbour should entail disaster only to the submarine, but if it does the loss of a few submarines is very small in comparison with the loss of a battleschip.