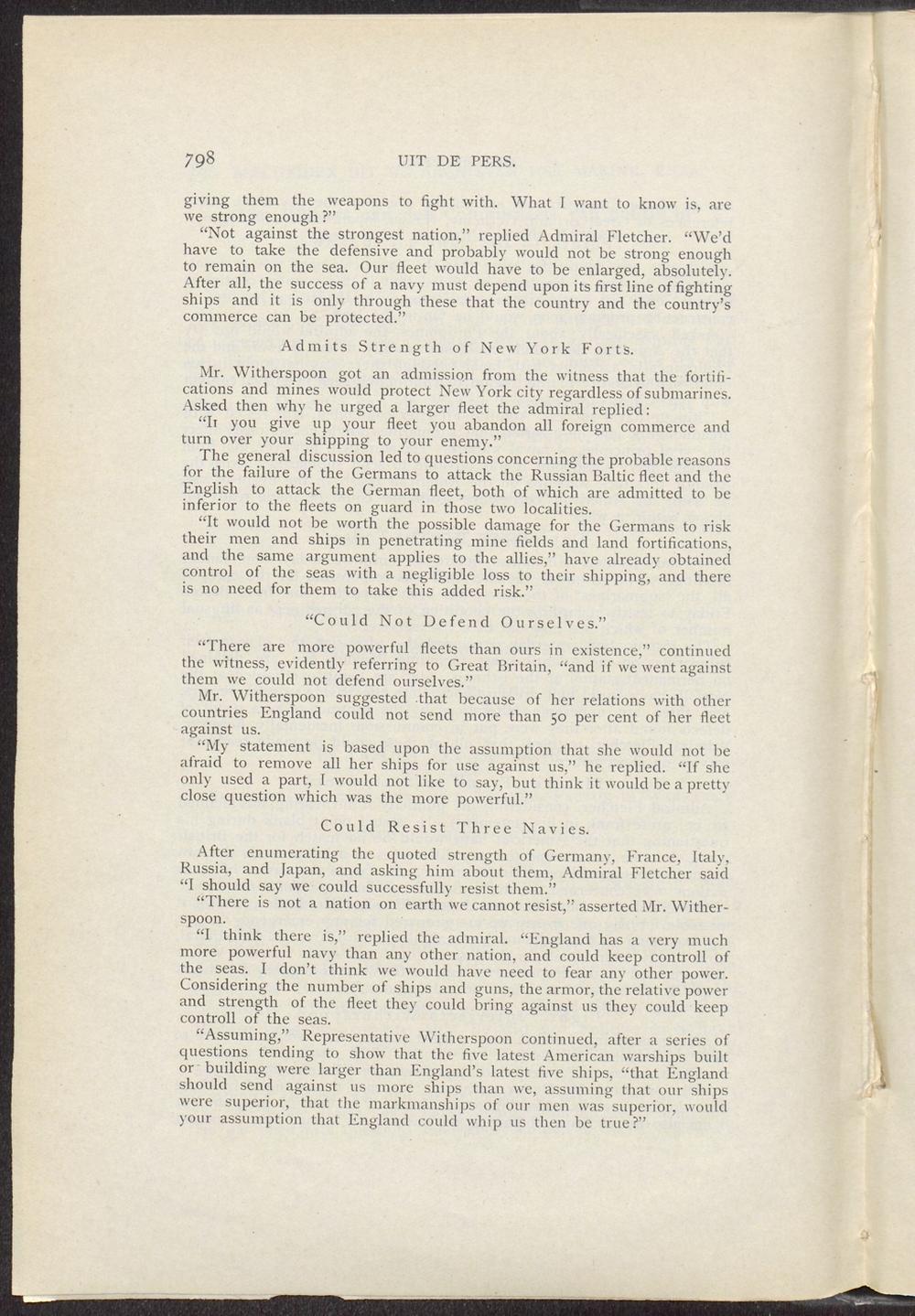 giving them the weapons to fight with. What I want to know is. are we strong enough ?"

"Not against the strongest nation," replied Admiral Fletcher. "We'd have to take the defensive and probably would not be strong enough to remain on the sea. Our fleet would have to be enlarged, absolutely. After all, the success of a navy must depend upon its first line of fighting ships and it is only through these that the country and the country's commerce can be protected."

Mr. Witherspoon got an admission from the witness that the fortifications and mines would protect New York city regardless of submarines. Asked then why he urged a larger fleet the admiral replied:

"li you give up your fleet you abandon all foreign commerce and turn over your shipping to your enemy."

The general discussion led to questions concerning the probable reasons for the failure of the Germans to attack the Russian Baltic fleet and the Enghsh to attack the German fleet, both of which are admitted to be mferior to the fleets on guard in those two localities.

"It would not be worth the possible damage for the Germans to risk their men and ships in penetrating mine fields and land fortifications, and the same argument applies to the allies," have alreadv obtained control of the seas with a negligible loss to their shipping, and there is no need for them to take this added risk."

"Could Not Defend Ourselves."

"There are more powerful fleets than ours in existence," continued the witness, evidently referring to Great Britain, "and if we went against them we could not defend ourselves."

Mr. Witherspoon suggested that because of her relations with other countries England could not send more than 50 per cent of her fleet against us.

"My statement is based upon the assumption that she would not be atraid to remove all her ships for use against us." he replied. "If she only used a part, I would not like to say, but think it would be a pretty close question which was the more powerful."

After enumerating the quoted strength of Germanv, France, Italv, Russia, and Japan, and asking him about them, Admiral Fletcher said "I should say we could successfully resist them."

"There is not a nation on earth we cannot resist," asserted Mr. Witherspoon.

"Assuming," Representative Witherspoon continued, after a series of questions tending to show that the five latest American warships built or building were larger than England's latest five ships, "that England should send against us more ships than we, assuming that our ships were superior, that the markmanships of our men was superior, would your assumption that England could whip us then be true?"