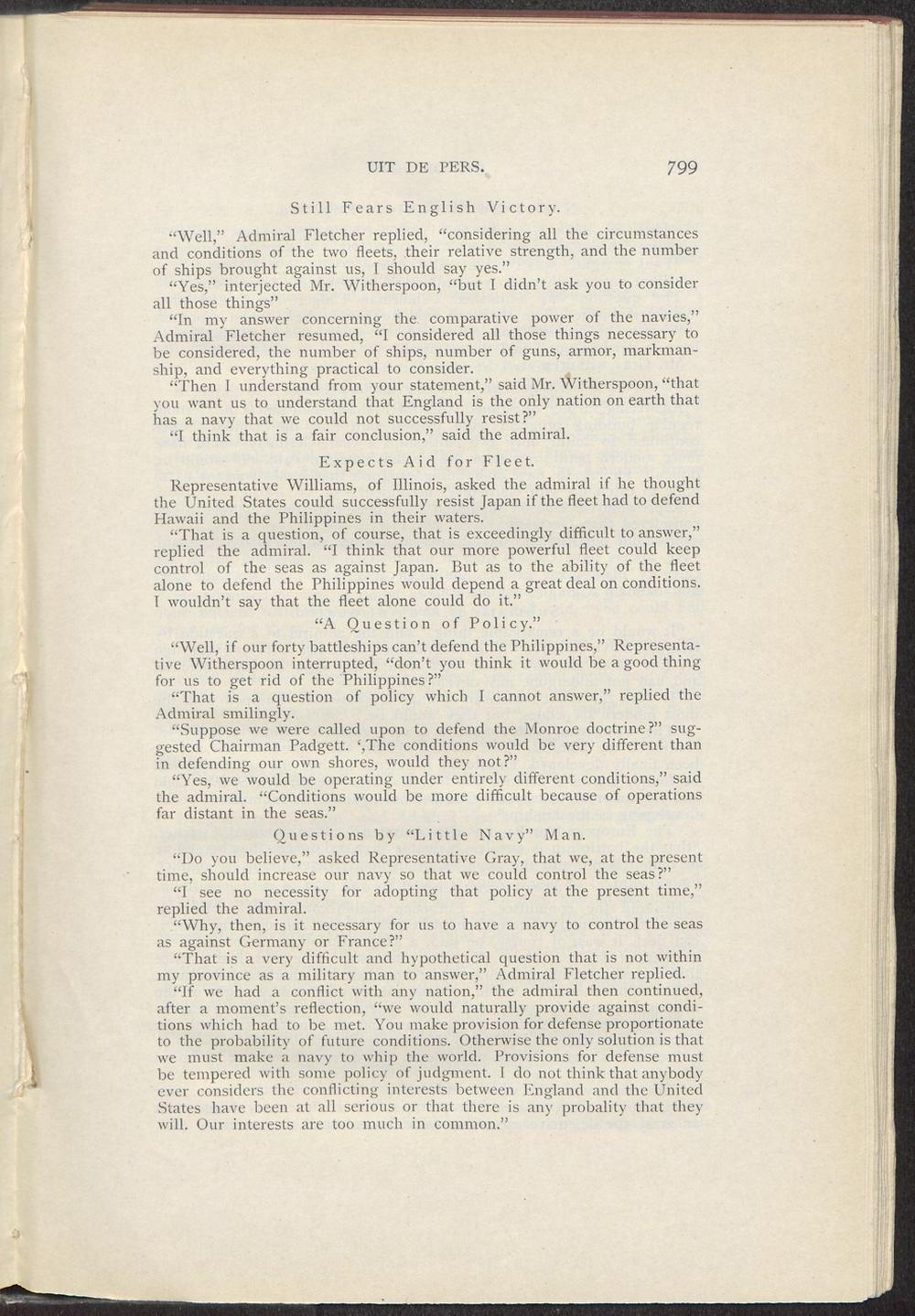 "Well," Admiral Fletcher replied, "considering all the circumstances and conditions of the two fleets, their relative strength, and the number of ships brought against us, I should say yes."

"Yes," interjected Mr. Witherspoon, "but I didn't ask you to consider all those things"

"In my answer concerning the comparative power of the navies," Admiral Fletcher resumed, "I considered all those things necessary to be considered, the number of ships, number of guns, armor, markmanship, and everything practical to consider.

"Then I understand from your statement," said Mr. Witherspoon, "that you want us to understand that England is the only nation on earth that has a navy that we could not successfully resist?"

"I think that is a fair conclusion," said the admiral.

Representative Williams, of Illinois, asked the admiral if he thought the United States could successfully resist Japan if the fleet had to defend Hawaii and the Philippines in their waters.

"That is a question, of course, that is exceedingly difficult to answer," replied the admiral. "I think that our more powerful fleet could keep control of the seas as against Japan. But as to the ability of the fleet alone to defend the Philippines would depend a great deal on conditions. I wouldn't say that the fleet alone could do it."

"Well, if our forty battleships can't defend the Philippines," Representative Witherspoon interrupted, "don't you think it would be a good thing for us to get rid of the Philippines?"

"That is a question of policy which I cannot answer," replied the Admiral smilingly.

"Suppose we were called upon to defend the Monroe doctrine?" suggested Chairman Padgett. ',The conditions would be very different than in defending our own shores, would they not?"

"Yes, we would be operating under entirely different conditions," said the admiral. "Conditions would be more difficult because of operations far distant in the seas."

"Do you believe," asked Representative Gray, that we, at the present time, should increase our navy so that we could control the seas?"

"I see no necessity for adopting that policy at the present time," replied the admiral.

"Why, then, is it necessary for us to have a navy to control the seas as against Germany or France?"

"That is a very difficult and hypothetical question that is not within my province as a military man to answer," Admiral Fletcher replied.

"If we had a conflict with any nation," the admiral then continued, after a moment's reflection, "we would naturally provide against conditions which had to be met. You make provision for defense proportionate to the probability of future conditions. Otherwise the only solution is that we must make a navy to whip the world. Provisions for defense must be tempered with some policy of judgment. I do not think that anybody ever considers the conflicting interests between England and the United States have been at all serious or that there is any probality that they will. Our interests are too much in common."