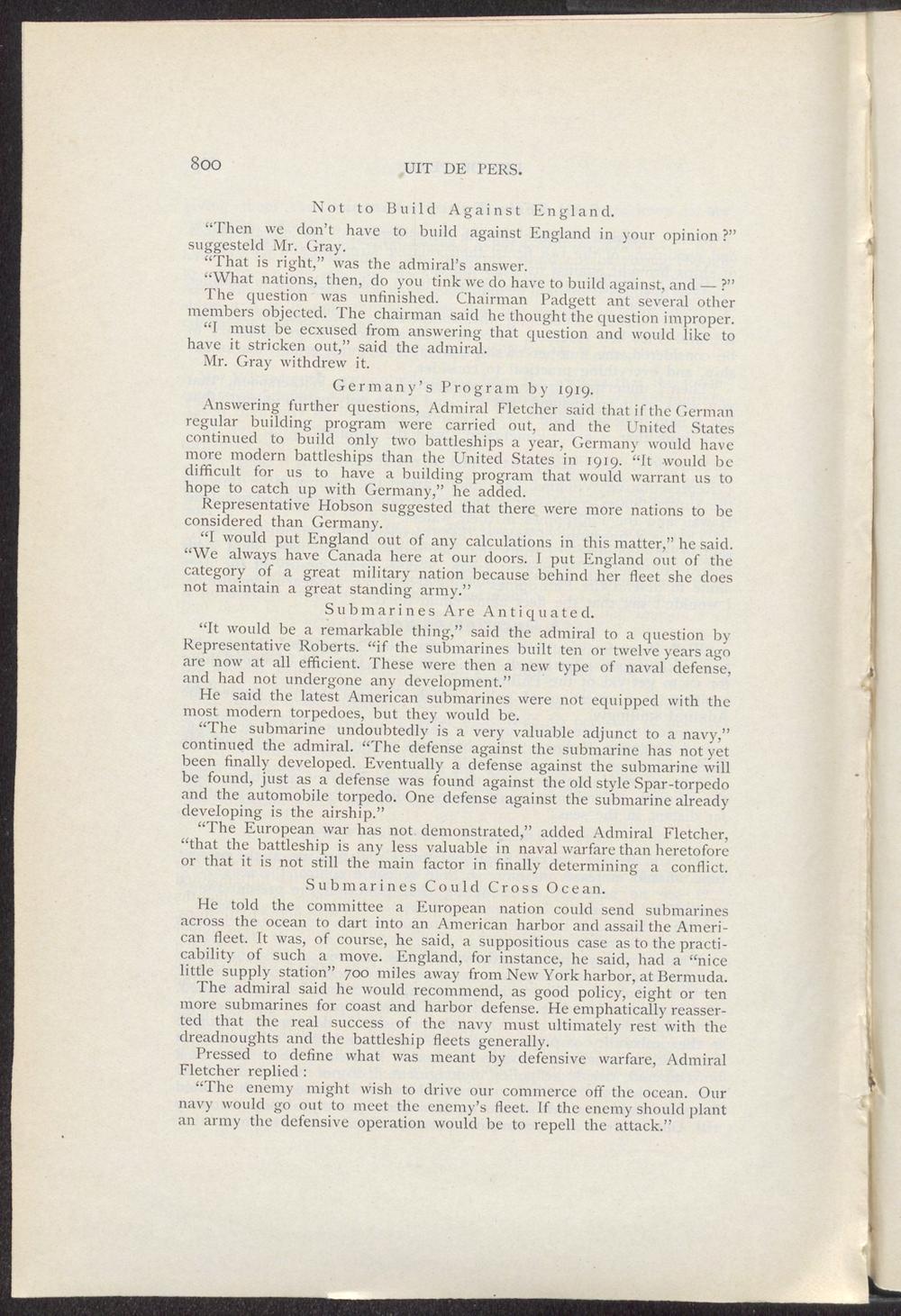 Not to Build Against England.

"Then we don't have to build against England in your opinion ?" suggesteld Mr. Gray.

"That is right," was the admiral's answer.

"What nations, then, do you tink we do have to build against, and — ?"

The question was unfinished. Chairman Padgett ant several other members objerted. The chairman said he thought the question improper.

'I must be ecxused from answering that question and would like to have it stricken out," said the admiral.

Answering further questions, Adm iral Fletcher said that if the German regular building program were carried out, and the United States continued to build only two battleships a year, Germany would have more modern battleships than the United States in 1919. "It would be difficult for us to have a building program that would warrant us to hope to catch up with Germany," he added.

Representative Hobson suggested that there were more nations to be considered than Germany.

"I would put England out of any calculations in this matter," he said. "We always have Canada here at our doors. I put England out of the category of a great military nation because behind her fleet she does not maintain a great standing army."

"It would be a remarkable thing," said the admiral to a question by Representative Roberts, "if the submarines built ten or twelve years ago are now at all efficiënt. These were then a new type of naval defense and had not undergone any deveiopment."

He said the latest American submarines were not equipped with the most modern torpedoes, but they would be.

"The European war has not. demonstrated," added Admiral Fletcher, "that the battleship is any less valuable in naval warfare than heretoforê or that it is not still the main factor in finally determining a conflict. Submarines Could Cross Ocean.

He told the committee a Pluropean nation could send submarines across the ocean to dart into an American harbor and assail the American fleet. it was, of course, he said, a suppositious case as to the practicability of such a move. England, for instance, he said, had a "nice httle supply station" 700 miles away from New York harbor, at Bermuda.

The admiral said he would recommend, as good policy, eight or ten more submarines for coast and harbor defense. He emphatically reasserted that the real success of the navy must ultimately rest with the dreadnoughts and the battleship fleets generalh.

Pressed to define what was meant by defensive warfare, Admiral Fletcher replied :

"The enemy might wish to drive our commerce off the ocean. Our navy would go out to meet the enemy's fleet. If the enemy should plant an army the defensive operation would be to repell the attack."