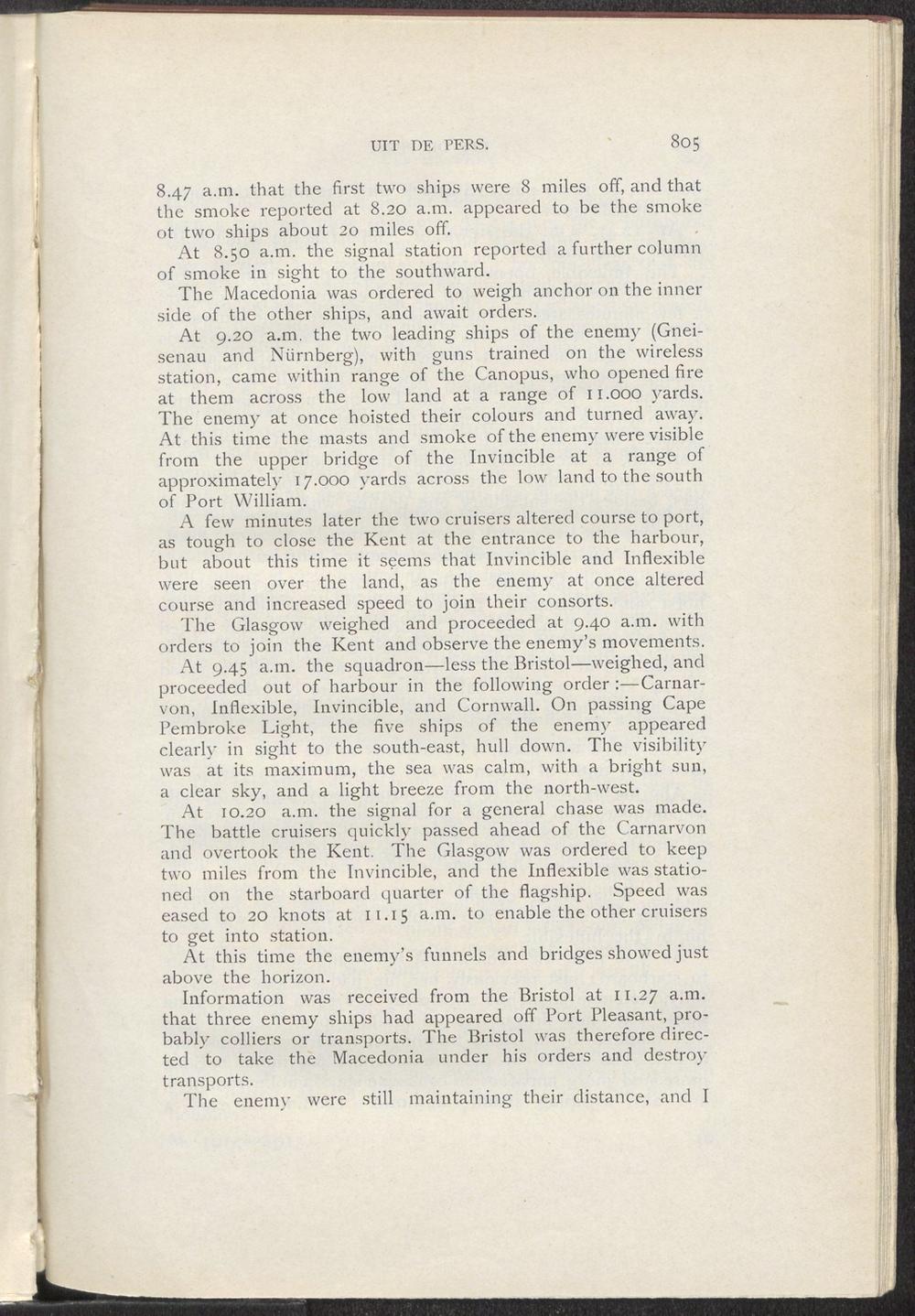 At 8.50 a.m. the signal station reported a further column of smoke in sight to the southward.

The Macedonia was ordered to weigh anchor on the inner side of the other ships, and await orders.

At 9.20 a.m. the two leading ships of the enemy (Gneisenau and Nürnberg), with guns trained on the wireless station, came within range of the Canopus, who opened fire at them across the low land at a range of 11.000 yards. The enemy at once hoisted their colours and turned away. At this time the masts and smoke of the enemy were visible from the upper bridge of the Invincible at a range of approximately 17.000 yards across the low land to the south of Port William.

A few minutes later the two cruisers altered course to port, as tough to close the Kent at the entrance to the harbour, but about this time it seems that Invincible and Inflexible were seen over the land, as the enemy at once altered course and increased speed to join their consorts.

The Glasgow weighed and proceeded at 9.40 a.m. with orders to join the Kent and observe the enemy's movements.

At 9.45 a.m. the squadron—less the Bristol—weighed, and proceeded out of harbour in the following order :—Carnarvon, Inflexible, Invincible, and Cornwall. On passing Cape Pembroke Light, the five ships of the enemy appeared clearly in sight to the south-east, huil down. The visibility was at its maximum, the sea was calm, with a bright sun, a clear sky, and a light breeze from the north-west.

At 10.20 a.m. the signal for a general chase was made. The battle cruisers quickly passed ahead of the Carnarvon and overtook the Kent. The Glasgow was ordered to keep two miles from the Invincible, and the Inflexible was stationed on the starboard quarter of the flagship. Speed was eased to 20 knots at 11.15 a.m. to enable the other cruisers to get into station.

At this time the enemy's funnels and bridges showed just above the horizon.

Information was received from the Bristol at 11.27 a.m. that three enemy ships had appeared off Port Pleasant, probably colliers or transports. The Bristol was therefore directed to take the Macedonia under his orders and destroy transports.

The enemy were still maintaining their distance, and I