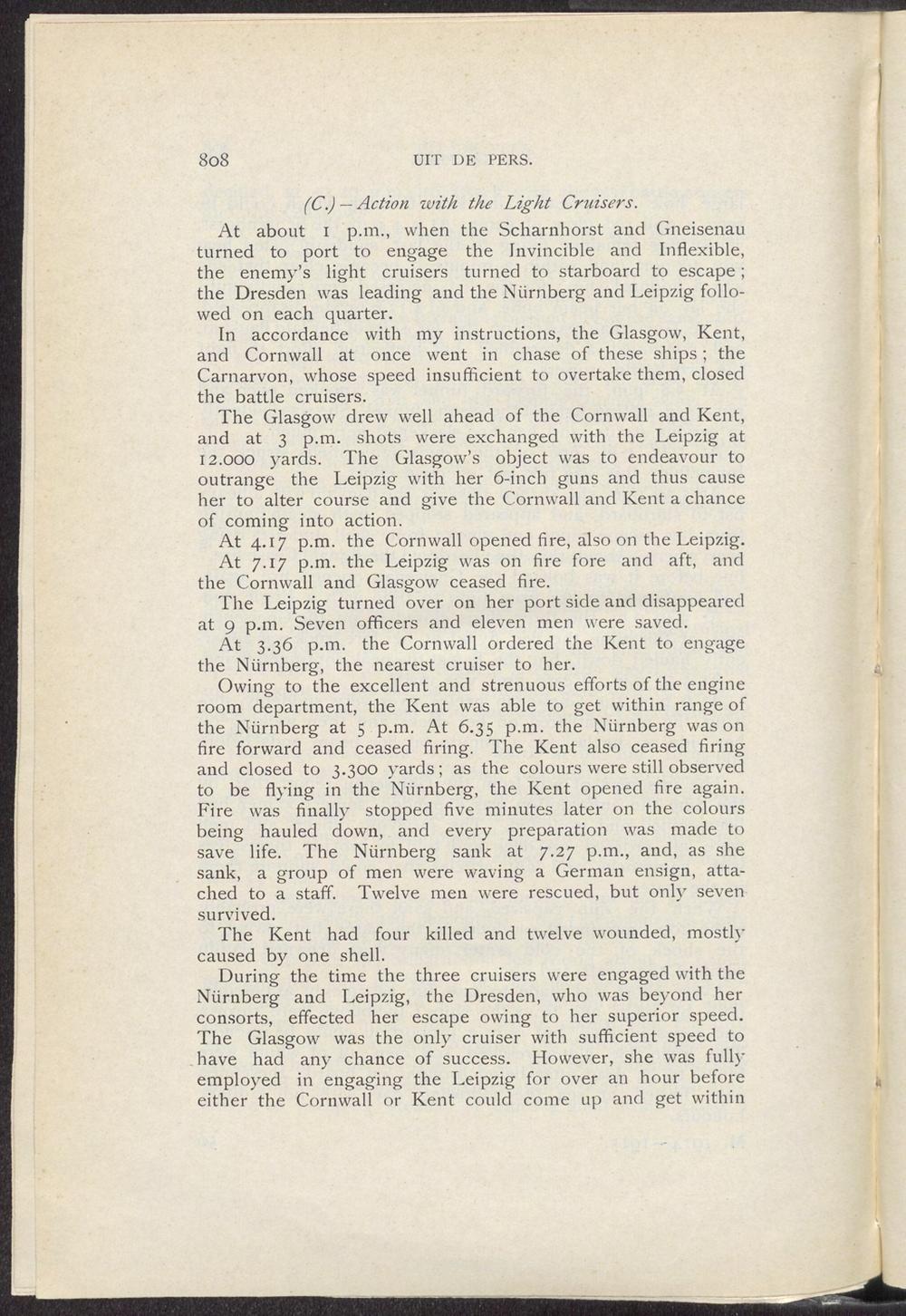 At about i p.m., when the Scharnhorst and Gneisenau turned to port to engage the Invincible and Inflexible, the enemy's light cruisers turned to starboard to escape; the Dresden was leading and the Nürnberg and Leipzig foliowed on each quarter.

In accordance with my instructions, the Glasgow, Kent, and Cornwall at once went in chase of these ships ; the Carnarvon, whose speed insufficiënt to overtake them, closed the battle cruisers.

At 7.17 p.m. the Leipzig was on fire fore and aft, and the Cornwall and Glasgow ceased fire.

The Leipzig turned over on her port side and disappeared at 9 p.m. Seven ofncers and eleven men were saved.

At 3.36 p.m. the Cornwall ordered the Kent to engage the Nürnberg, the nearest cruiser to her.

Owing to the excellent and strenuous efforts of the engine room department, the Kent was able to get within range of the Nürnberg at 5 p.m. At 6.35 p.m. the Nürnberg was on fire forward and ceased firing. The Kent also ceased firing and closed to 3.300 yards; as the colours were still observed to be flying in the Nürnberg, the Kent opened fire again. Fire was finally stopped five minutes later on the colours being hauled down, and every preparation was made to save life. The Nürnberg sank at 7.27 p.m., and, as she sank, a group of men were waving a German ensign, attached to a staff. Twelve men were rescued, but only seven survived.

The Kent had four killed and twelve wounded, mostly caused by one shell.

During the time the three cruisers were engaged with the Nürnberg and Leipzig, the Dresden, who was beyond her consorts, effected her escape owing to her superior speed. The Glasgow was the only cruiser with sufficiënt speed to have had any chance of success. However, she was fully employed in engaging the Leipzig for over an hour before either the Cornwall or Kent could come up and get within