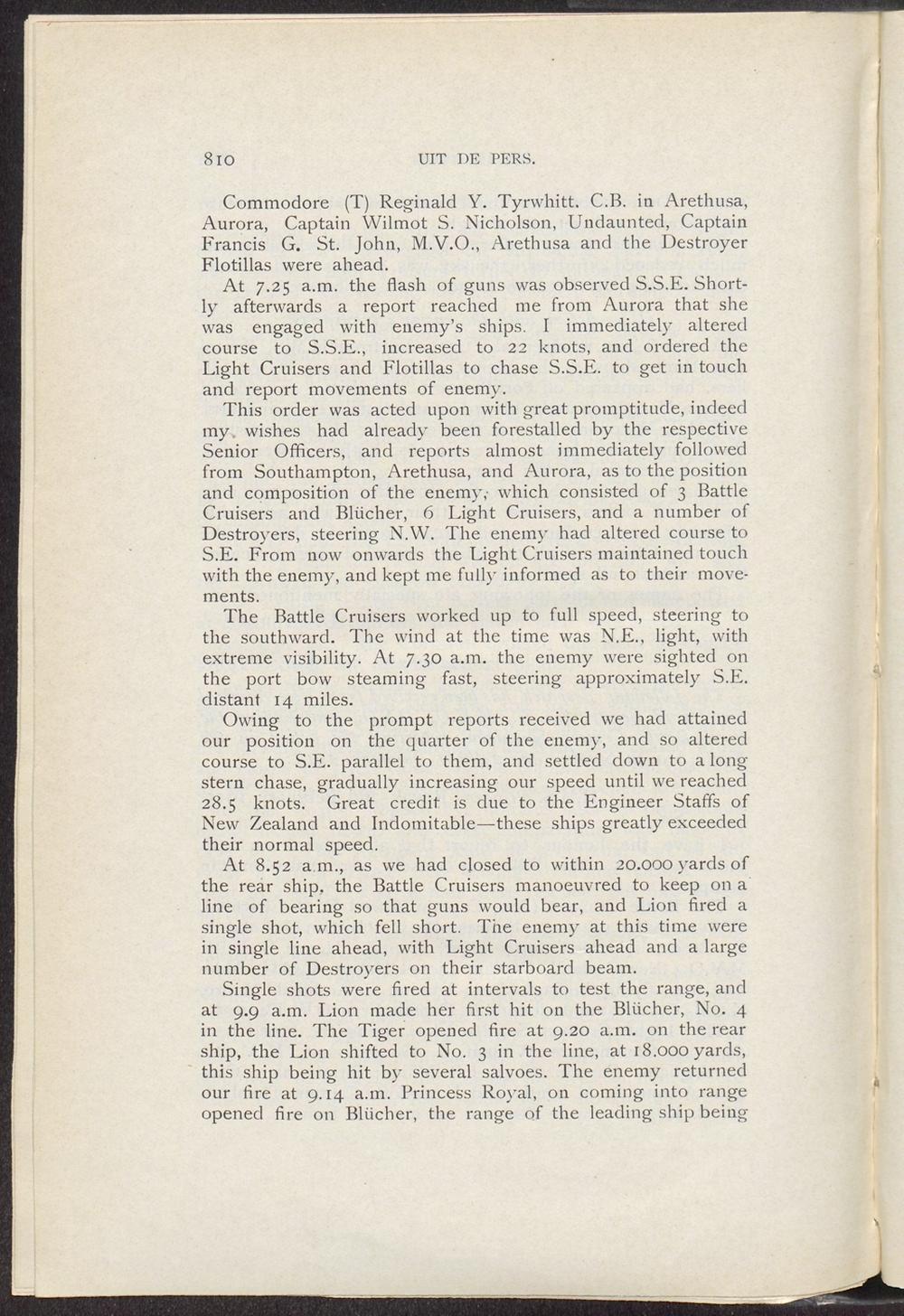 At 7.25 a.m. the flash of guns was observed S.S.E. Shortly afterwards a report reached me from Aurora that she was engaged with enemy's ships. I immediately altered course to S.S.E., increased to 22 knots, and ordered the Light Cruisers and Flotillas to chase S.S.E. to get in touch and report movements of enemy.

This order was acted upon with great promptitude, indeed my wishes had already been forestalled by the respective Senior Officers, and reports almost immediately followed from Southampton, Arethusa, and Aurora, as to the position and composition of the enemy,- which consisted of 3 Battle Cruisers and Blücher, 6 Light Cruisers, and a number of Destroyers, steering NW. The enemy had altered course to S.E. From now onwards the Light Cruisers maintained touch with the enemy, and kept me fully informed as to their movements.

The Battle Cruisers worked up to full speed, steering to the southward. The wind at the time was N.E., light, with extreme visibility. At 7.30 a.m. the enemy were sighted on the port bow steaming fast, steering approximately S.E. distant 14 miles.

Owing to the prompt reports received we had attained our position on the quarter of the enemy, and so altered course to S.E. parallel to them, and settled down to a longstern chase, gradually increasing our speed until we reached 28.5 knots. Great credit is due to the Engineer Staffs of New Zealand and Indomitable—these ships greatly exceeded their normal speed.

At 8.52 a.m., as we had closed to within 20.000 yards of the rear ship, the Battle Cruisers manoeuvred to keep on a line of bearing so that guns would bear, and Lion fired a single shot, which feil short. The enemy at this time were in single line ahead, with Light Cruisers ahead and a large number of Destroyers on their starboard beam.

Single shots were fired at intervals to test the range, and at 9.9 a.m. Lion made her first hit on the Blücher, No. 4 in the line. The Tiger opened fire at 9.20 a.m. on the rear ship, the Lion shifted to No. 3 in the line, at 18.000 yards, this ship being hit by several salvoes. The enemy returned our fire at 9.14 a.m. Princess Royal, on coming into range opened fire on Blücher, the range of the leading ship being