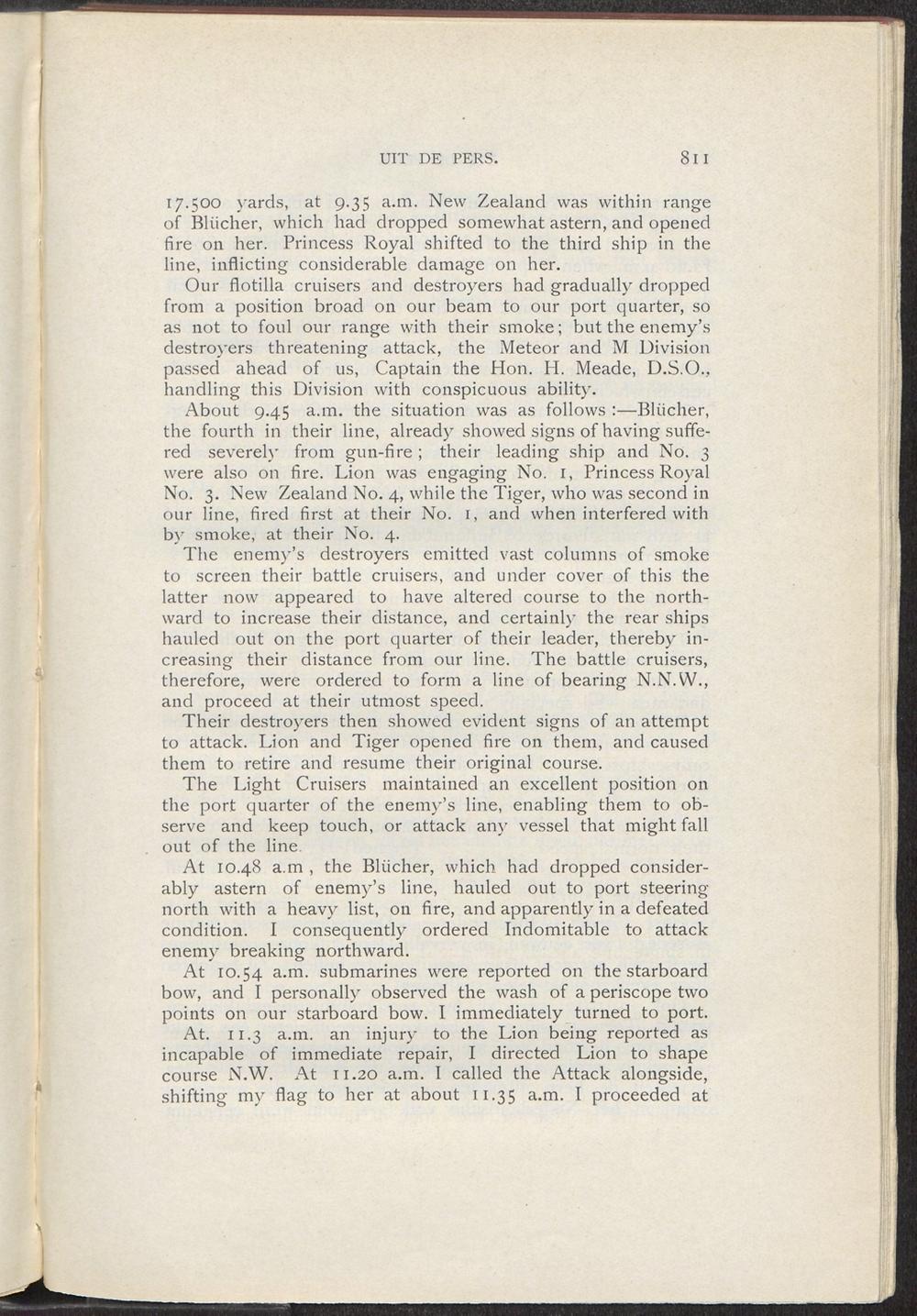 17.500 yards, at 9.35 a.m. New Zealand was within range of Blücher, which had dropped somewhat astern, and opened fire 011 her. Princess Royal shifted to the third ship in the line, inflicting considerable damage on her.

Our flotilla cruisers and destroyers had gradually dropped from a position broad on our beam to our port quarter, so as not to foul our range with their smoke; but the enemy's destroyers threatening attack, the Meteor and M Division passed ahead of us, Captain the Hon. H. Meade, D.S.O., handling this Division with conspicuous ability.

About 9.45 a.m. the situation was as follows :—Blücher, the fourth in their line, already showed signs of having suffered severely from gun-fire ; their leading ship and No. 3 were also on fire. Lion was engaging No. 1, Princess Royal No. 3. New Zealand No. 4, while the Tiger, who was second in our line, fired first at their No. 1, and when interfered with by smoke, at their No. 4.

The enemy's destroyers emitted vast columns of smoke to screen their battle cruisers, and under cover of this the latter now appeared to have altered course to the northward to increase their distance, and certainly the rear ships hauled out on the port quarter of their leader, thereby increasing their distance from our line. The battle cruisers, therefore, were ordered to form a line of bearing N.N.W., and proceed at their utmost speed.

Their destroyers then showed evident signs of an attempt to attack. Lion and Tiger opened fire on them, and caused them to retire and resumé their original course.

The Light Cruisers maintained an excellent position on the port quarter of the enemy's line, enabling them to observe and keep touch, or attack any vessel that might fall out of the line.

At 10.48 a.m , the Blücher, which had dropped considerably astern of enemy's line, hauled out to port steering north with a heavy list, on fire, and apparently in a defeated condition. I consequently ordered Indomitable to attack enemy breaking northward.

At 10.54 a-m' submarines were reported on the starboard bow, and I personally observed the wash of a periscope two points on our starboard bow. I immediately turned to port.

At. 11.3 a.m. an injury to the Lion being reported as incapable of immediate repair, I directed Lion to shape course N.W. At 11.20 a.m. I called the Attack alongside, shifting my flag to her at about 11.35 a-m- I proceeded at