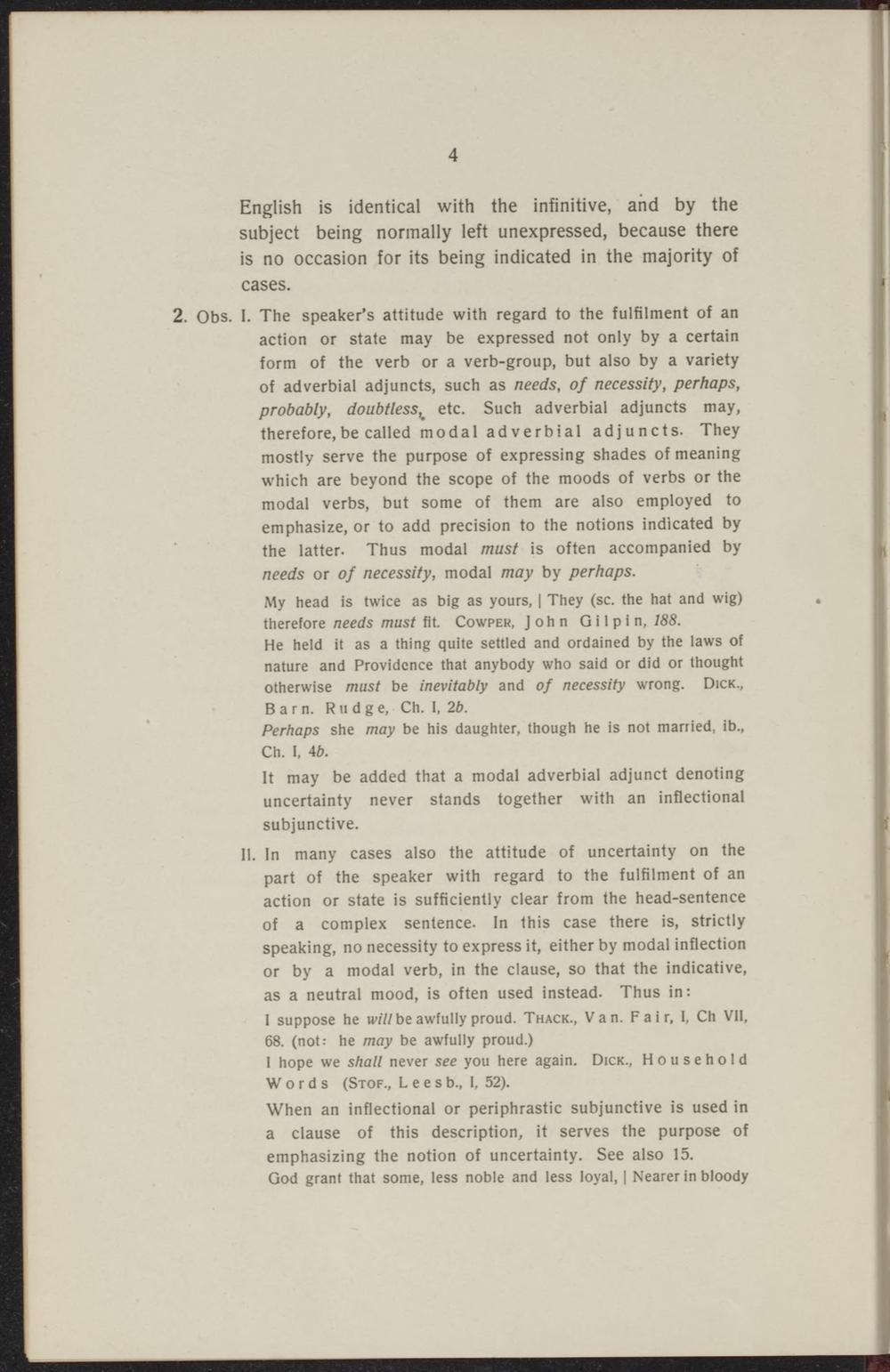 English is identical with the infinitive, and by the subject being normally ieft unexpressed, because there is no occasion for its being indicated in the majority of cases.

2. Obs. I. The speakers attitude with regard to the fulfilment of an action or state may be expressed not only by a certain form of the verb or a verb-group, but also by a variety of adverbial adjuncts, such as needs, of necessity, perhaps, probably, doubttess^ etc. Such adverbial adjuncts may, therefore.be called modal adverbial adjuncts. They mostly serve the purpose of expressing shades of meaning which are beyond the scope of the moods of verbs or the modal verbs, but some of them are also employed to emphasize, or to add precision to the notions indicated by the latter. Thus modal must is often accompanted by needs or of necessity, modal may by perhaps. My head is twice as big as yours, | They (sc. the nat and wig) therefore needs must fit Cowper, John Gilpin, 188. He held it as a thing quite settled and ordained by the laws of nature and Providcnce that anybody who said or did or thought otherwise must be inevitably and of necessity wrong. Dick., Barn. Rn d ge, Ch. I, 2b.

Perhaps she may be his daughter, though he is not married, ib., Ch. I, 4b.

It may be added that a modal adverbial adjunct denoting uncertainty never stands together with an inflectional subjunctive.

II. In many cases also the attitude of uncertainty on the part of the speaker with regard to the fulfilment of an action or state is sufficiently clear from the head-sentence of a complex sentence. In this case there is, strictly speaking, no necessity to express it, either by modal inflection or by a modal verb, in the clause, so that the indicative, as a neutral mood, is often used instead. Thus in: I suppose he w/Wbeawfully proud. Thack., Van. Fair, I, Ch VII, 68. (not: he may be awfully proud.)

When an inflectional or periphrastic subjunctive is used in a clause of this description, it serves the purpose of emphasizing the notion of uncertainty. See also 15. God grant that some, less noble and less loyal, | Nearer in btoody