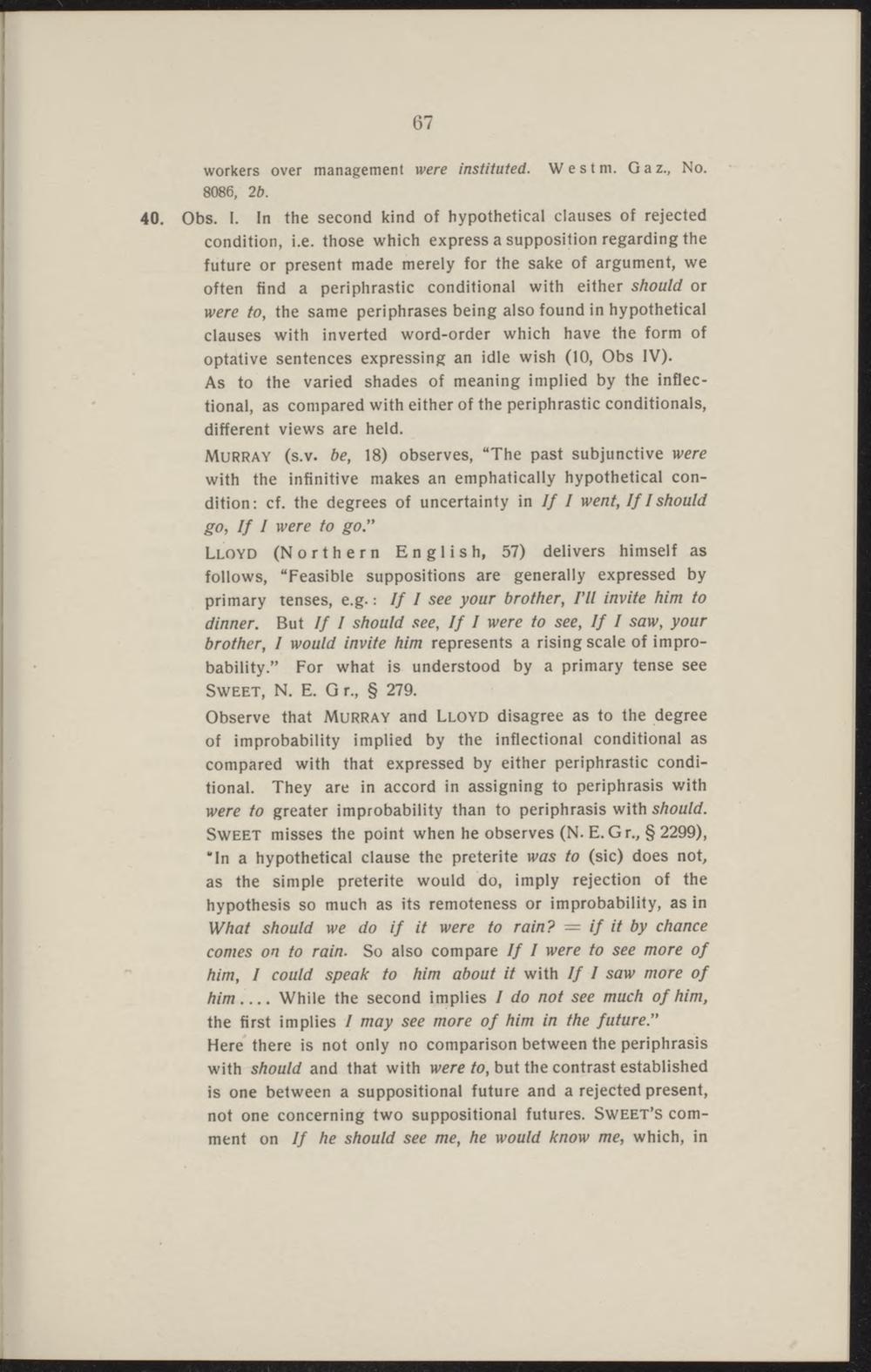 Obs. I. In the second kind of hypothetical clauses of rejected condition, i.e. those which express a supposition regarding the future or present made merely for the sake of argument, we often find a periphrastic conditional with either should or were to, the same periphrases being also found in hypothetical clauses with inverted word-order which have the form of optative sentences expressing an idle wish (10, Obs IV). As to the varied shades of meaning implied by the inflectional, as compared with either of the periphrastic conditionals, different views are held.

Murray (s.v. be, 18) observes, "The past subjunctive were with the infinitive makes an emphatically hypothetical condition: cf. the degrees of uncertainty in If I went, Ifl should go, If I were to go."

Lloyd (Northern English, 57) delivers himself as follows, "Feasible suppositions are generally expressed by primary tenses, e.g.: If I see your brother, Fll Invite hint to dinntr. But If I should see, If I were to see, If I saw, your brother, I would invite him represents a rising scale of improbability." For what is understood by a primary tense see Sweet, N. E. G r, § 279.

Observe that Murray and Lloyd disagree as to the degree of improbability implied by the inflectional conditional as compared with that expressed by either periphrastic conditional. They are in accord in assigning to periphrasis with were to great er improbability than to periphrasis with should. Sweet misses the point when he observes (N. E. G r, § 2299), 'In a hypothetical clause the preterite was to (sic) does not, as the simple preterite would do, imply rejection of the hypothesis so much as its remoteness or improbability, as in What should we do if it were to rain? = if it by c ha nee comes on to rain. So also compare If I were to see more of him, I could speak to him about It with If l saw more of him.... While the second implies / do not see much of htm, the first implies / may see more of him In the future." Here'there is not only no comparison between the periphrasis with should and that with were to, but the contrast established is one between a suppositional future and a rejected present, not one concerning two suppositional futures. Sweet's comment on If he should see me, he would know me, which, in