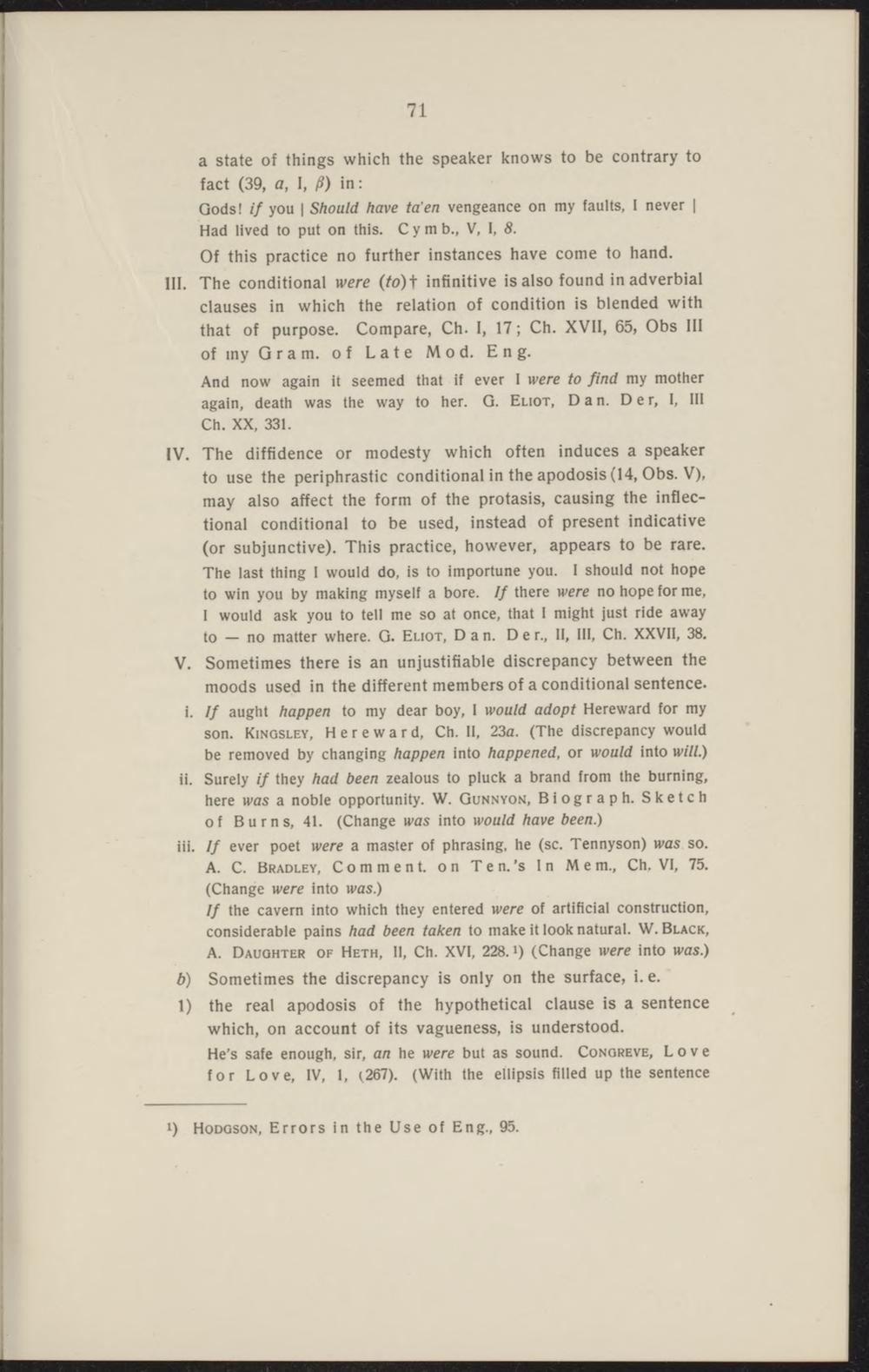 Gods! if you | Should have ta'en vengeance on my faults, I never |

Of this practice no further instances have come to hand.

The conditional were (fo)t infinitive is also found in adverbial

clauses in which the relation of condition is blended with

The diffidence or modesty which often induces a speaker to use the periphrastic conditional in the apodosis (14, Obs. V), may also affect the form of the protasis, causing the inflectional conditional to be used, instead of present indicative (or subjunctive). This practice, however, appears to be rare. The last thing I would do, is to importune you. I should not hope to win you by making myself a bore. If there were no hope for me, I would ask you to teil me so at once, that I might just ride away to — no matter where. G. Eliot, Dan. Der, II, III, Ch. XXVII, 38. Sometimes there is an unjustifiable discrepancy between the moods used in the different members of a conditional sentence. If aught happen to my dear boy, I would adopt Hereward for my son. Kinosley, Hereward, Ch. II, 23a. (The discrepancy would be removed by changing happen into happened, or would into will.) Surely if they had been zealous to pluck a brand from the burning, here was a noble opportunity. W. Gunnyon, Biograph. Sketch of Burns, 41. (Change was into would have been.) If ever poet were a master of phrasing, he (sc. Tennyson) was so. A. C. Braoley, Comment. on Ten.'s In Mem, Ch, VI, 75. (Change were into was.)

If the cavern into which they entered were of artificial construction, considerable pains had been taken to make it look natural. W. Black, A. Dauohtbr of Heth, II, Ch. XVI, 228. *) (Change were into was.) Sometimes the discrepancy is only on the surface, i. e.' the real apodosis of the hypothetical clause is a sentence which, on account of its vagueness, is understood. He's safe enough, sir, an he were but as sound. Conoreve, Love for Love, IV, 1, (267). (With the ellipsis filled up the sentence