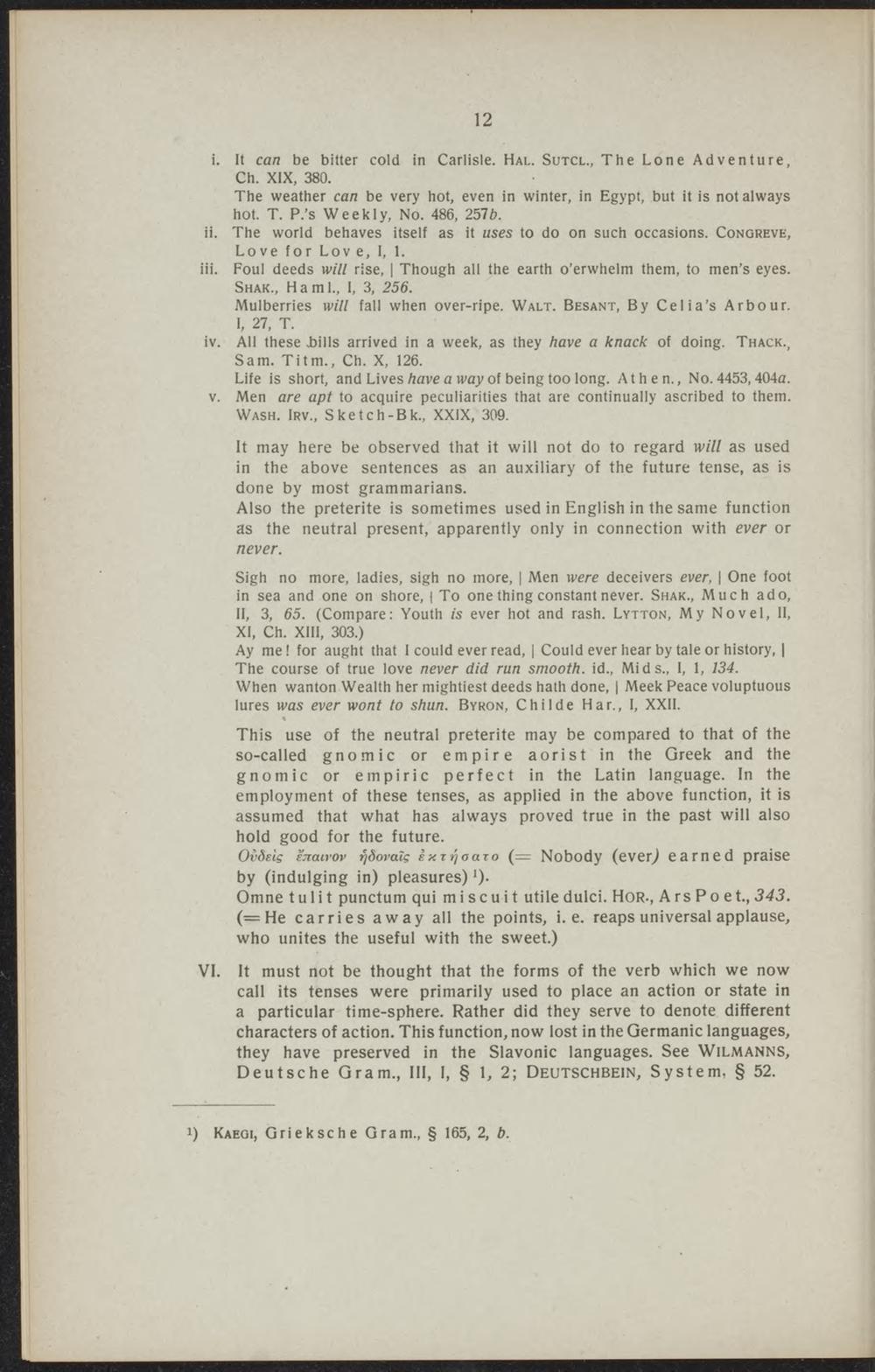 The world behaves itself as it uses to do on such occasions. Conoreve, Love for Lov e, I, 1.

Muiberries will fall when over-ripe. Walt. Besant, By Celia's Arbour.

Life is short, and Lives havea way of being too long. At hen., No. 4453,404a. Men are apt to acquire peculiarities that are continually ascribed to them. Wash. Irv., Sketch-Bk, xxix, 309.

It may here be observed that it will not do to regard will as used in the above sentences as an auxiliary of the future tense, as is done by most grammarians.

Also the preterite is sometimes used in English in the same function as the neutral present, apparently only in connection with ever or never.

Sigh no more, ladies, sigh no more, | Men were deceivers ever, | One foot in sea and one on shore, | To one thing constant never. Shak, Much ado,

Ay me I for aught that i could ever read, | Could ever hear by tale or history, | The course of true love never did run smooth. id, Mids, i, 1, 134. When wanton Wealth her mightiest deeds hath done, | Meek Peace voluptuous lures was ever wont to shun. Byron, Childe Har., i, xxii.

This use of the neutral preterite may be compared to that of the so-called gnomic or empire aorist in the Greek and the gnomic or empirie perfect in the Latin language. In the employment of these tenses, as applied in the above function, it is assumed that what has always proved true in the past will also hold good for the future.

Omne tulit punctum qui miscu i t utile dulci. Hor, Ars Po et,343. (=He carries away all the points, i.e. reapsuniversalapplause, who unites the useful with the sweet.)

It must not be thought that the forms of the verb which we now call its tenses were primarily used to place an action or state in a particular time-sphere. Rather did they serve to denote different characters of action. This function, now lost in the Germanic languages, they have preserved in the Slavonic languages. See Wilmanns, Deutsche Gram, III, I, § 1, 2; Deutschbein, System, § 52.