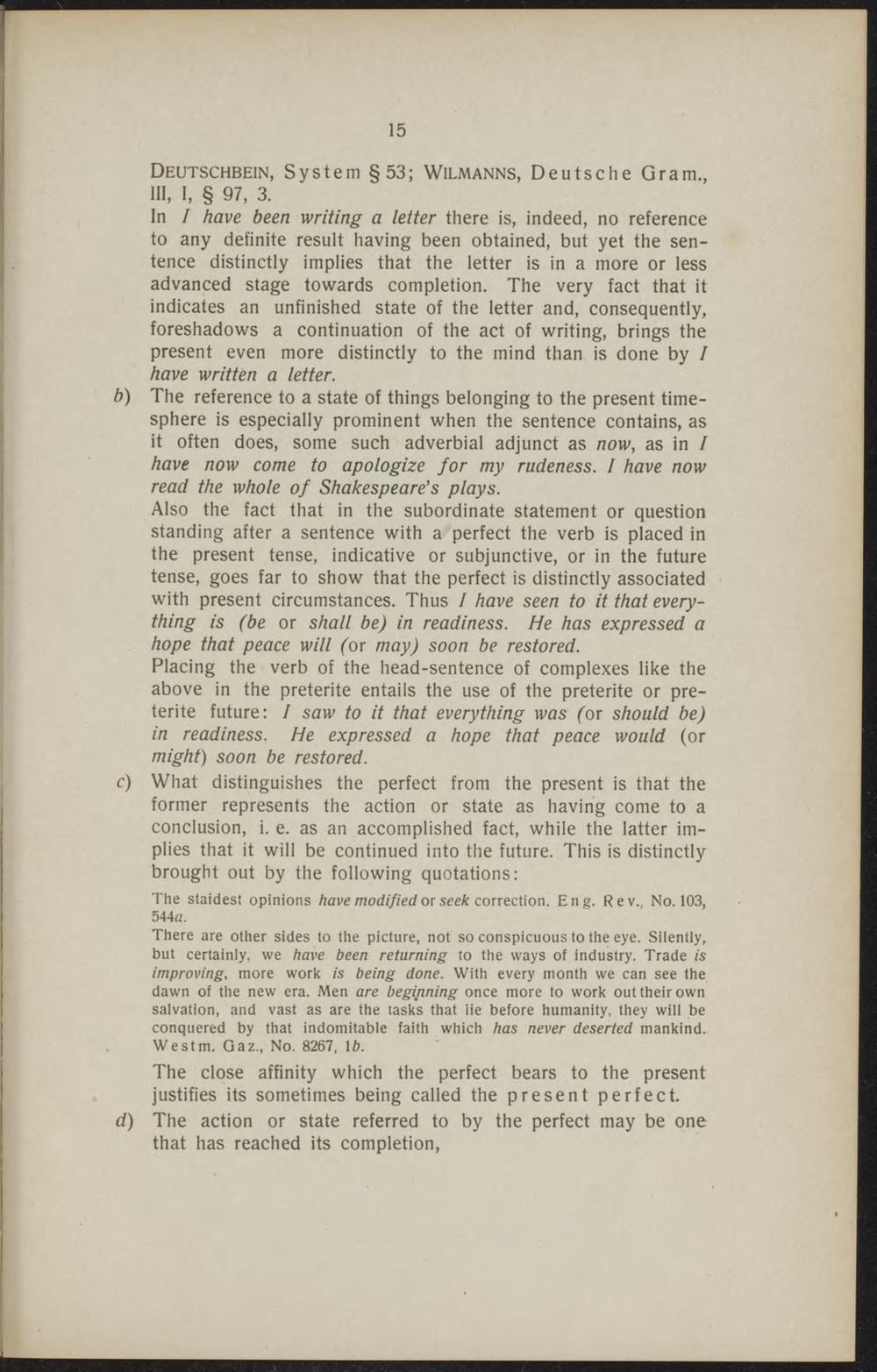 In / have been writing a letter there is, indeed, no reference to any definite result having been obtained, but yet the sentence distinctly implies that the letter is in a more or less advanced stage towards completion. The very fact that it indicates an unfinished state of the letter and, consequently, foreshadows a continuation of the act of writing, brings the present even more distinctly to the mind than is done by / have written a letter.

The reference to a state of things belonging to the present timesphere is especially prominent when the sentence contains, as it often does, some such adverbial adjunct as non', as in / have now come to apologize for my rudeness. I have now read the whole of Shakespeare's plays. Also the fact that in the subordinate statement or question standing after a sentence with a perfect the verb is placed in the present tense, indicative or subjunctive, or in the future tense, goes far to show that the perfect is distinctly associated with present circumstances. Thus / have seen to it that everything is (be or shall be) in readiness. He has expressed a hope that peace will (or may) soon be restored. Placing the verb of the head-sentence of complexes like the above in the preterite entails the use of the preterite or preterite future: I saw to it that everything was for should be) in readiness. He expressed a hope that peace would (or might) soon be restored.

What distinguishes the perfect from the present is that the former represents the action or state as having come to a conclusion, i. e. as an accomplished fact, while the latter implies that it will be continued into the future. This is distinctly brought out by the following quotations:

There are other sldes to the picture, not so conspicuous to the eye. Silently, but certainty, we have been returning to the ways of industry. Trade is improving, more work is being done. With every month we can see the dawn of the new era. Men are beginning once more to work out their own salvation, and vast as are the tasks that iie before humanity, they will be conquered by that indomitable faith which has never deserted mankind. Westm. Gaz., No. 8267, lö.

The close affinity which the perfect bears to the present justifies its sometimes being called the present perfect. The action or state referred to by the perfect may be one that has reached its completion,