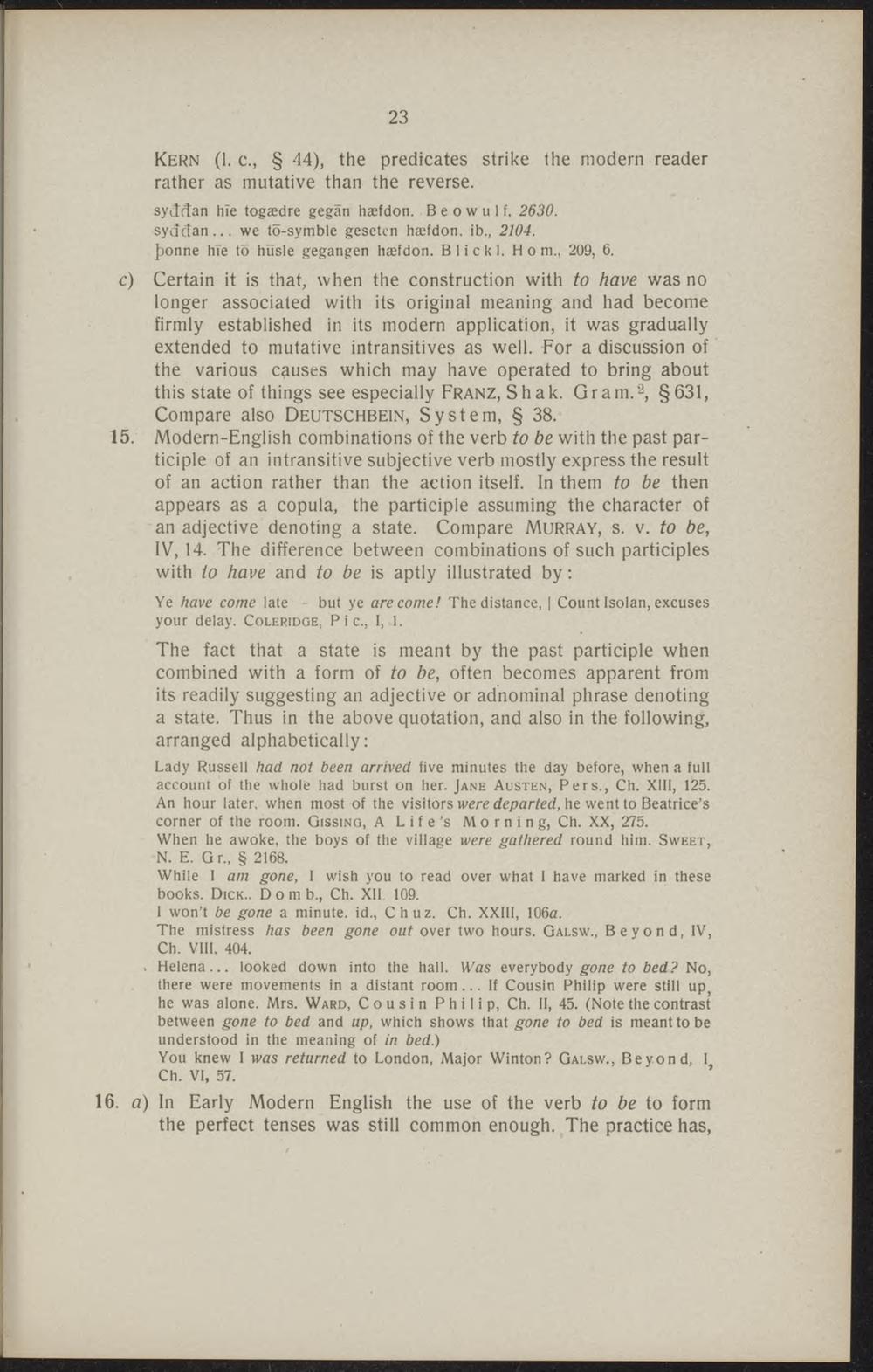 Kern (1. c, § 44), the predicates strike the modern reader rather as mutative than the reverse.

c) Certain it is that, when the construction with to have was no longer associated with its original meaning and had become firmly established in its modern application, it was gradually extended to mutative intransitives as well. For a discussion of the various causes which may have operated to bring about this state of things see especially Franz, Shak. Gram.2, §631, Compare also Deutschbein, System, § 38. 15. Modern-English combinations of the verb to be with the past participle of an intransitive subjective verb mostly express the result of an action rather than the action itself. In them to be then appears as a copula, the participle assuming the character of an adjective denoting a state. Compare murray, s. v. to be, IV, 14. The difference between combinations of such participles with to have and to be is aptly illustrated by:

Ye have come late - but ye are come! The distance, | Count Isolan, excuses your delay. Coleridoe, Pic, I, I,

The fact that a state is meant by the past participle when combined with a form of to be, often becomes apparent from its readily suggesting an adjective or adnominal phrase denoting a state. Thus in the above quotation, and also in the following, arranged alphabetically:

Lady Russell had not been arrived five minutes the day before, when a full account of the whole had burst on her. Jane Austen, Pers., Ch. XIII, 125. An hour later, when most of the visitors were departed, he went to Beatrice's corner of the room. Gissino, A Life's Morning, Ch. XX, 275. When he awoke, the boys of the village were gathered round him. Sweet, N. e. G r, § 2168.

While I am gone, I wish you to read over what 1 have marked in these

The mistress has been gone out over two hours. Galsw, Beyond, IV,

. Helena... looked down into the hall. Was everybody gone to bed? No, there were movements in a distant room... If Cousin Philip were still up he was alone. Mrs. Ward, Cousin Philip, Ch. II, 45. (Note the contrast between gone to bed and up, which shows that gone to bed is meant to be understood in the meaning of in bed.)

You knew I ïvas returned to London, Major Winton? Galsw, Beyond, I Ch. VI, 57.

16. a) In Early Modern English the use of the verb to be to form the perfect tenses was still common enough. The practice has,