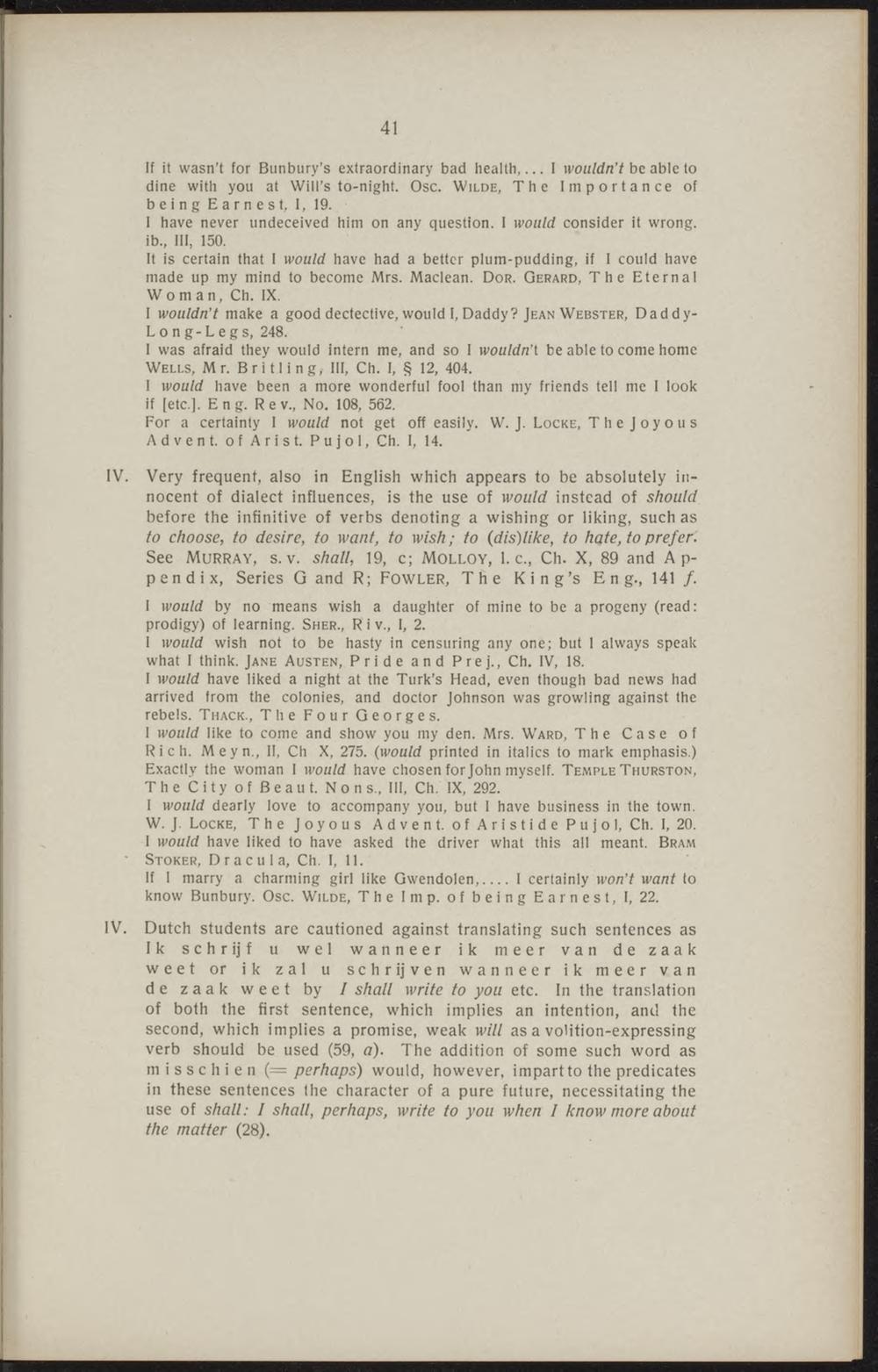 I have never undeceived him on any question. I would consider it wrong, ib, III, 150.

It is certain that I would have had a bettcr plum-pudding, if I could have made up my mind to become Mrs. Maclean. Dor. Gerard, The Eternal Woman, Ch. IX.

I wouldn't make a good dectective, would I, Daddy? Jean Webster, DaddyLong-Legs, 248.

IV. Very frequent, also in English which appears to be absoluteiy innocent of dialect influences, is the use of would instead of should before the infinitive of verbs denoting a wishing or liking, such as to choose, to desire, to want, to wish; to (dis)tike, to hate, to pref er: See Murray, s.v. shall, 19, c; Molloy, 1. c, Ch. X, 89 and Appendix, Series G and R; Fowler, The King's Eng., 141 ƒ.

I would by no means wish a daughter of mine to be a progeny (read: prodigy) of learning. Sher, R i v, I, 2.

I would wish not to be hasty in censuring any one; but 1 always speak what I think. Jane Austen, Pride and Prej., Ch. IV, 18. I would have liked a night at the Turk's Head, even though bad news had arrived trom the colonies, and doctor Johnson was growling against the rebels. Thack, The Four Georges.

I would like to come and show you my den. Mrs. Ward, The Case of Rich. Meyn, II, Ch X, 275. (would printed in italics to mark emphasis.) Exactly the woman I would have chosen for John myself. Temple Thurston, The City of Beau t. Non s, III, Ch. IX, 292.

I would dearly love to accompany you, but I have business in the town. W. J. Locke, The Joyous Advent. ofAristidePujol, Ch. I, 20. I would have liked to have asked the driver what this all meant. Bram ■ Stoker, Dracula, Ch. I, 11.

If I marry a charming girl like Gwendolen, I certainly won't want to

IV. Dutch students are cautioned against translating such sentences as Ik schrijf u wel wanneer ik meer van de zaak weet or ik zal u schrijven wanneer ik meer van de zaak weet by I shall write to you etc. In the translation of both the first sentence, which implies an intention, and the second, which implies a promise, weak will as a voütion-expressing verb should be used (59, a). The addition of some such word as misschien (= perhaps) would, however, impartto the predicates in these sentences the character of a pure future, necessitating the use of shall: I shall, perhaps, write to you when I know more about the matter (28).