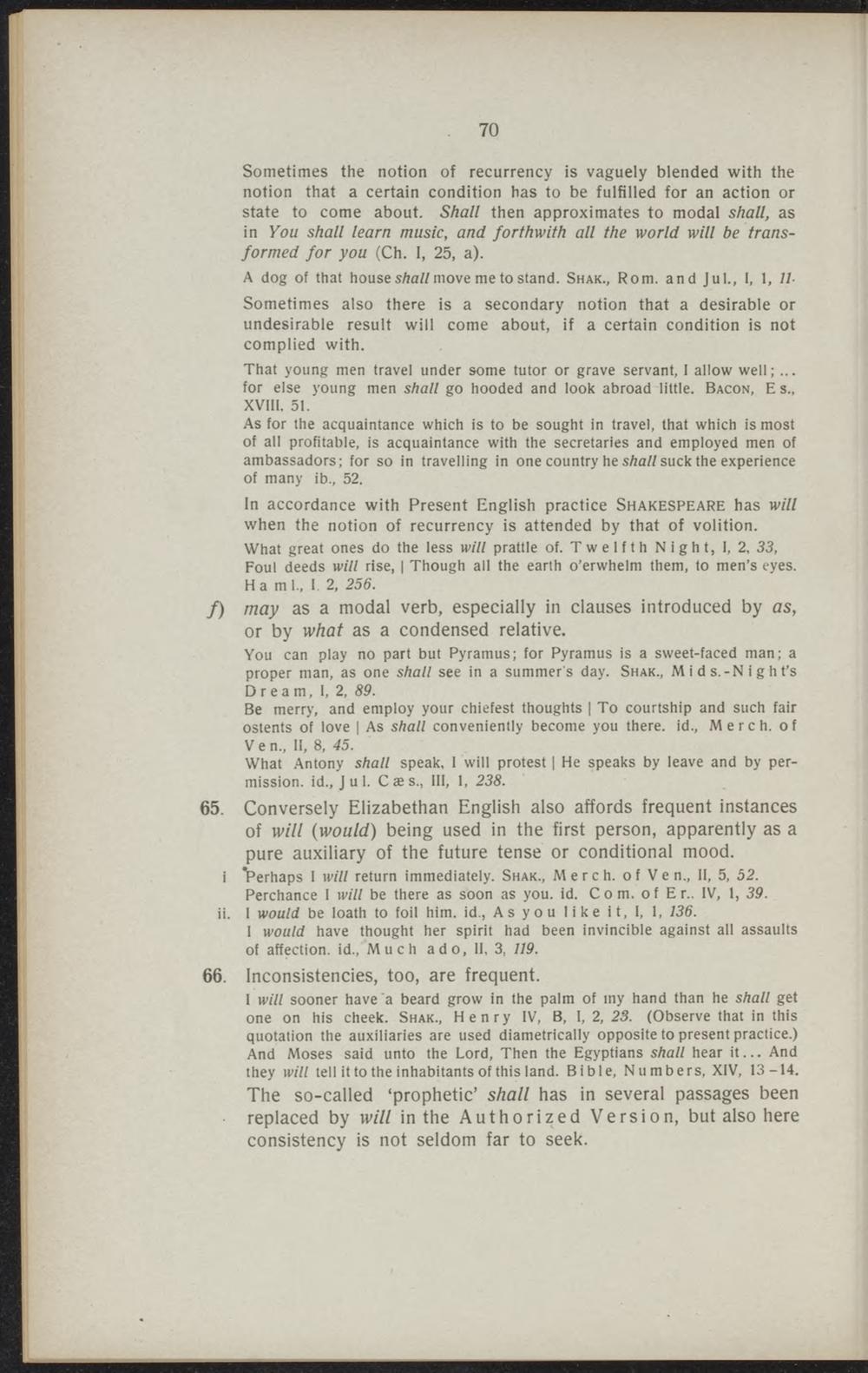 Sometimes the notion of recurrency is vaguely blended with the notion that a certain condition has to be fulfilled for an action or state to come about. Shall then approximates to modal shall, as in You shall learn music, and forthwith all the world will be transformed for you (Ch. I, 25, a).

A dog of that house shall move me to stand. Shak, Rom. and Jul., I, 1, 11Sometimes also there is a secondary notion that a desirable or undesirable result will come about, if a certain condition is not complied with.

That young men travel under some tutor or grave servant, I allow well;... for else young men shall go hooded and look abroad little. Bacon, E s, XVIII, 51.

As for the acquaintance which is to be sought in travel, that which is most of all profitable, is acquaintance with the secretaries and employed men of ambassadors; for so in travelling in one country he shall suck the experience of many ib, 52.

In accordance with Present English practice Shakespeare has will when the notion of recurrency is attended by that of volition. What great ones do the less will prattle of. T w e I f t h Night, I, 2, 33, Foul deeds will rise, | Though all the earth o'erwhelm them, to men's eyes. H a m 1, I. 2, 256.

may as a modal verb, especially in clauses introduced by as, or by what as a condensed relative.

You can play no part but Pyramus; for Pyramus is a sweet-faced man; a proper man, as one shall see in a summer's day. Shak, Mids.-Nlght's Dream, I, 2, 89.

Be merry, and employ your chiefest thoughts | To courtship and such fair ostents of love | As shall conveniently become you there. id, Merch. of Ven, II, 8, 45.

Conversely Elizabethan English also affords frequent instances of will (would) being used in the first person, apparently as a pure auxiliary of the future tense or conditional mood. TPerhaps I will return immediately. Shak, Merch. of Ven, li, 5, 52. Perchance I will be there as soon as you. id. Com. of Er.. IV, 1, 39. I would be loath to foil him. id. As you like it, I, 1, 136. I would have thought her spirit had been invincible against all assaults of affection. id, Much ado, II, 3, 119.

Inconsistencies, too, are frequent.

I will sooner have'a beard grow in the palm of my hand than he shall get one on his cheek. Shak, Henry IV, B, I, 2, 23. (Observe that in this quotation the auxiliaries are used diametrically opposite to present practice.) And Moses said unto the Lord, Then the Egyptians shall hear it... And they will teil itto the inhabitants of this land. Bible, Numbers, XIV, 13-14. The so-called 'prophetic' shall has in several passages been replaced by will in the Authorized Vers ion, but also here consistency is not seldom far to seek.