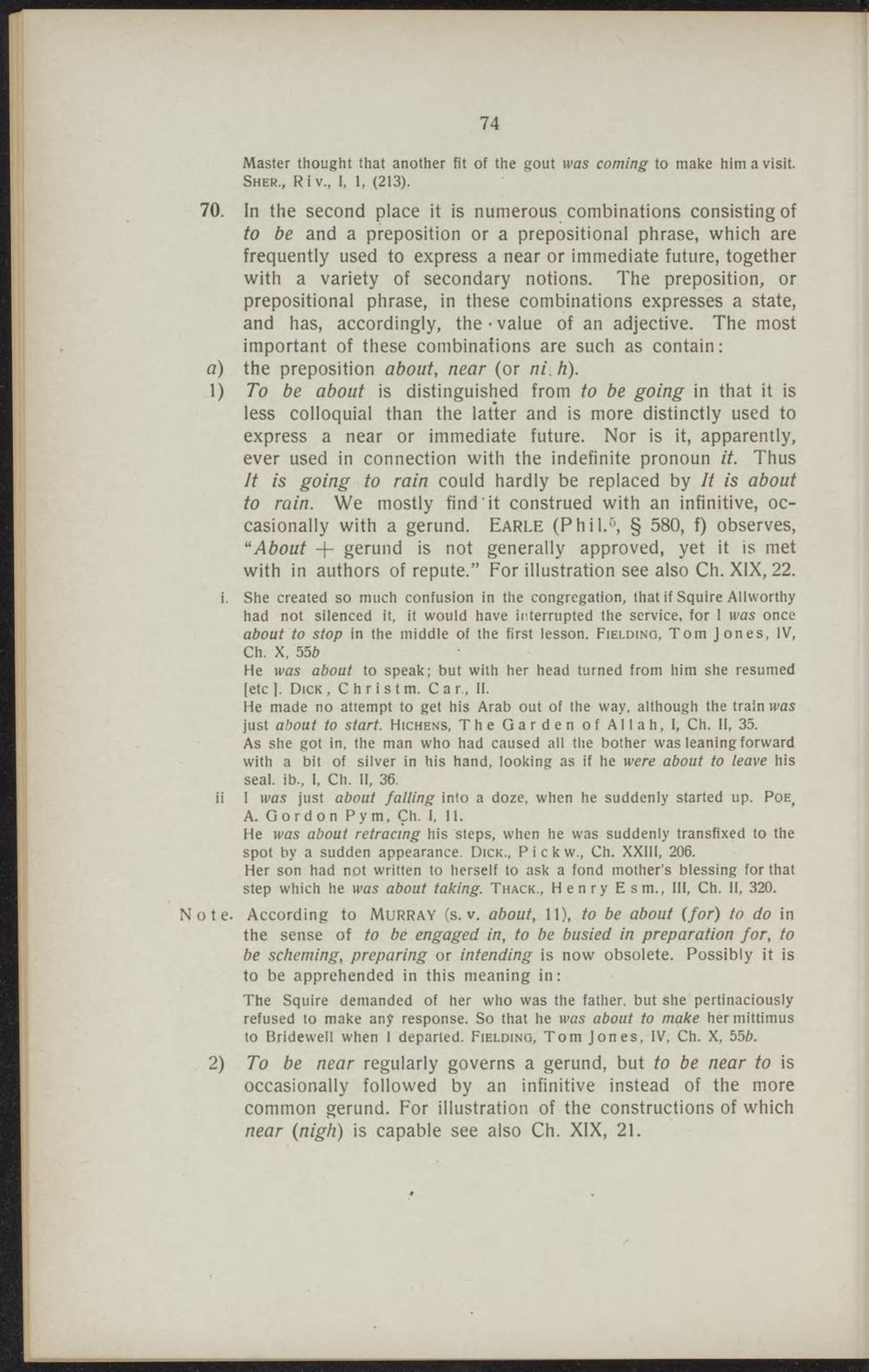 1) To be about is distinguished from to be going in that it is less colloquial than the latter and is more distinctly used to express a near or immediate future. Nor is it, apparently, ever used in connection with the indefinite pronoun it. Thus It is going to rain could hardly be replaced by It is about to rain. We mostly find' it construed with an infinitive, occasionally with a gerund. Earle (Phil.5, § 580, f) observes, "About + gerund is not generally approved, yet it is met with in authors of repute." For illustration see also Ch. XIX, 22.

i. She created so much confuslon in the congregatlon, that if Squire Allworthy had not silenced it, it would have interrupted the service, for I was once about to stop in the middle of the first lesson. Fieldino, Tom Jones, IV, Ch. X, 55ó

He made no attempt to get his Arab out of the way, although the train was Just about to start. Hichens, The Garden of Allah, 1, Ch. II, 35. As she got in, the man who had caused all the bother was leaning forward with a bit of silver in his hand, looking as if he were about to leave his seal. ib, I, Ch. II, 36. ii I was Just about falling into a doze, when he suddenly started up. Poe, a. Oordon Pym, Ch. I, 11.

He was about retracing his 'steps, when he was suddenly transfixed to the spot by a sudden appearance. Dick, P i c k w, Ch. XXIII, 206. Her son had not written to herself to ask a fond mother's blessing for that step which he was about taking. Thack, Henry Esm., III, Ch. II, 320.

Note. According to Murray (s.v. about, 11), to be about (for) to do in the sense of to bé engaged in, to be busied in preparation for, to be scheming, preparing or Mending is now obsolete. Possibly it is to be apprehended in this meaning in:

The Squire demanded of her who was the father. but she pertinaciously refused to make any response. So that he was about to make hermittimus to Bridewell when I deparled. Fieldino, Tom Jones, IV, Ch. X, 55o.

2) To be near regularly governs a gerund, but to be near to is occasionally followed by an infinitive instead of the more common gerund. For illustration of the constructions of which near (nigh) is capable see also Ch. XIX, 21.