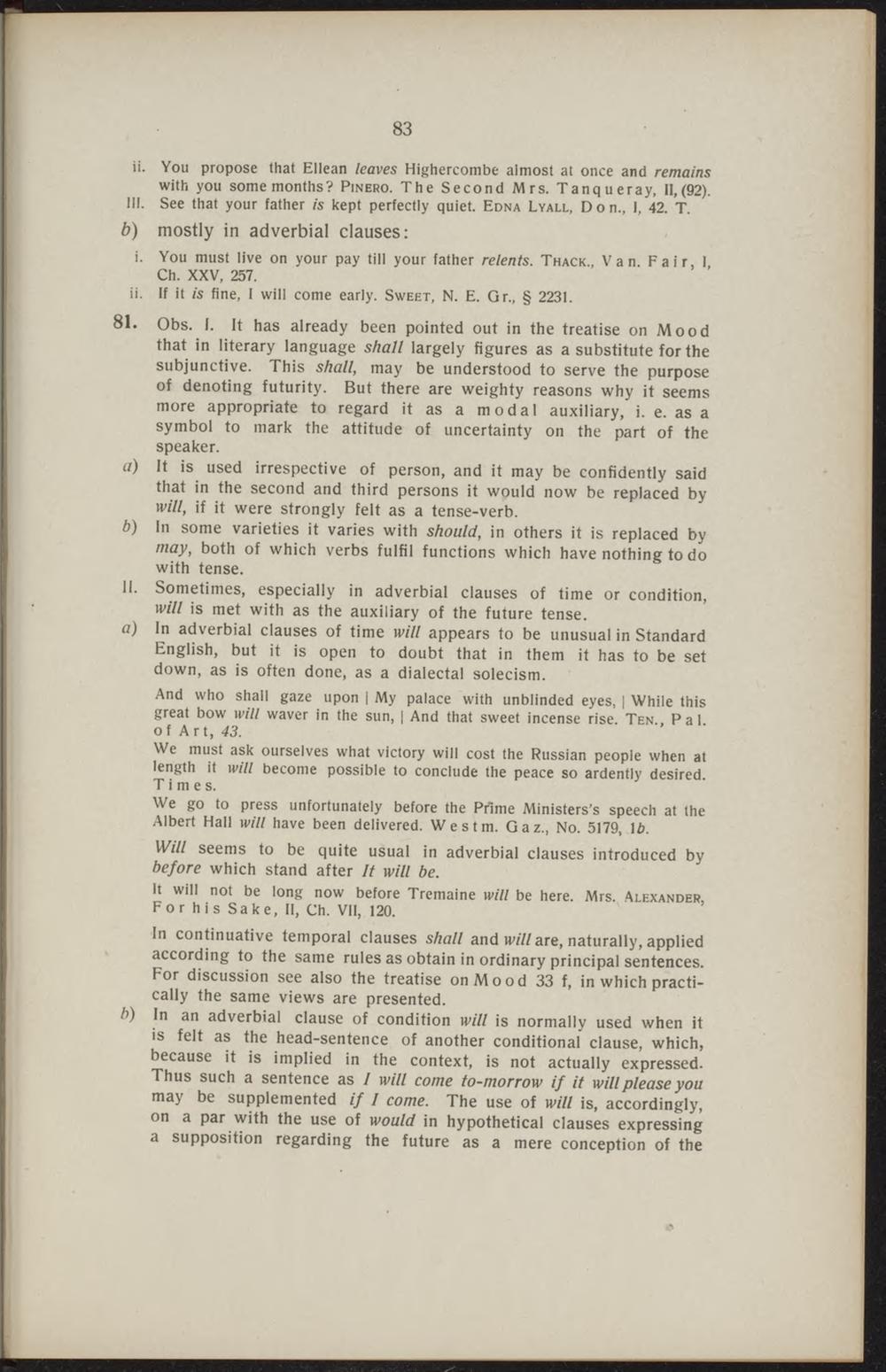 You propose that Ellean leaves Highercombe almost at once and remains with you some months? Pinero. The Second Mrs. Tanqueray, 11,(92). See that your father is kept perfectly quiet. Edna Lyall, D o n., I, 42. T.

Obs. I. It has already been pointed out in the treatise on Mood that in literary language shall largely figures as a substitute for the subjunctive. This shall, may be understood to serve the purpose of denoting futurity. But there are weighty reasons why it seems more appropriate to regard it as a modal auxiliary, i. e. as a symbol to mark the attitude of uncertainty on the part of the speaker.

It is used irrespective of person, and it may be confidently said that in the second and third persons it would now be replaced by will, if it were strongly feit as a tense-verb.

In some varieties it varies with should, in others it is replaced by may, both of which verbs fulfil functions which have nothing to do with tense.

Sometimes, especially in adverbial clauses of time or condition,

will is met with as the auxiliary of the future tense.

English, but it is open to doubt that in them it has to be set

down, as is often done, as a dialectal solecism.

And who shall gaze upon | My palace with unblinded eyes, | While this

great bow will waver in the sun, | And that sweet incense rise Ten P a 1

We must ask ourselves what victory will cost the Russian people when at length it will become possible to conclude the peace so ardently desired. Times.

We go to press unfortunately before the Prime Ministers's speech at the Albert Hall will have been delivered. Westm. Gaz, No. 5179, lö. Will seems to be quite usuai in adverbial clauses introduced by before which stand after It will be.

It will not be long now before Tremaine will be here. Mrs. Alexander For his Sake, II, Ch. VII, 120.

In continuative temporal clauses shall and tv/Hare, naturally, applied according to the same rules as obtain in ordinary principal sentences. For discussion see also the treatise onMood 33 f, in which practically the same views are presented.

In an adverbial clause of condition will is normally used when it is feit as the head-sentence of another conditional clause, which, because it is implied in the context, is not actually expressed. Thus such a sentence as 1 will come to-morrow if it will please you may be supplemented if I come. The use of will is, accordingly, on a par with the use of would in hypothetical clauses expressing a supposition regarding the future as a mere conception of the