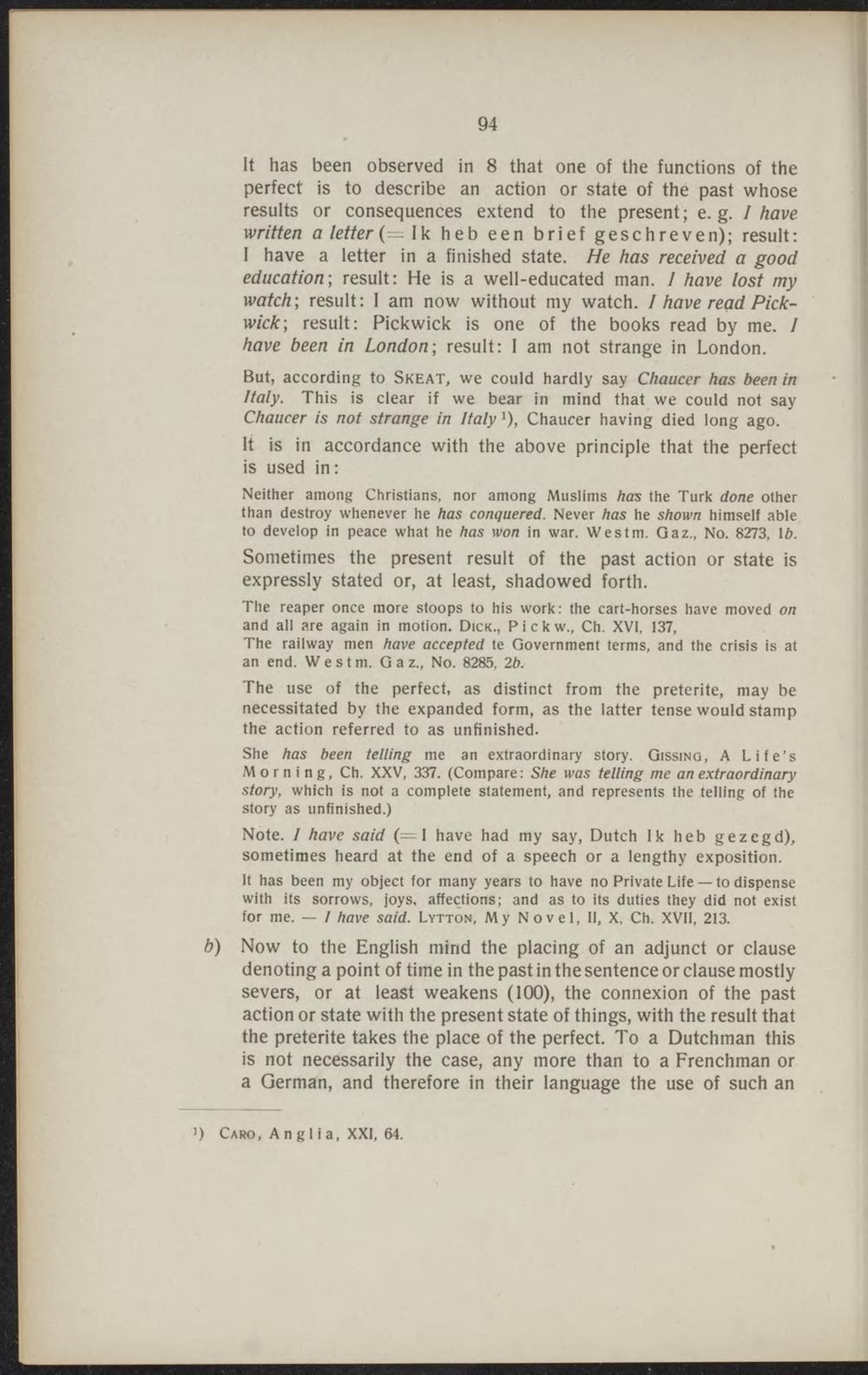 It has been observed in 8 that one of the functions of the perfect is to describe an action or state of thé past whose results or consequences extend to the present; e. g. / have written aletter(=\k heb een brief geschreven); result: I have a letter in a finished state. He has received a good education; result: He is a well-educated man. / have lost my watch; result: I am now without my watch. / have read Pickwick; result: Piek wiek is one of the books read by me. / have been in London; result: I am not strange in London.

But, according to Skeat, we could hardly say Chaucer has been in Italy. This is clear if we bear in mind that we could not say Chaucer is not strange in Italy >), Chaucer having died long ago.

It is in accordance with the above principle that the perfect is used in:

Neither among Christians, nor among Muslims has the Turk done other than destroy whenever he has conquered. Never has he shown himself able to develop in peace what he has Won in war. Westm. Gaz, No. 8273, lo.

Sometimes the present result of the past action or state is expressly stated or, at least, shadowed forth.

The reaper once more stoops to his work: the cart-horses have moved on and all are again in motion. Dick, Pickw, Ch. XVI, 137, The raiiway men have accepted te Government terms, and the crisis is at an end. Westm. Gaz, No. 8285, 2b.

The use of the perfect, as distinct from the preterite, may be necessitated by the expanded form, as the latter tense would stamp the action referred to as unfinished.

Note. ƒ have said (=1 have had my say, Dutch Ik heb gezegd), sometimes heard at the end of a speech or a lengthy exposition. It has been my object for many years to have no Private Life — to dispense with its sorrows, joys, affections; and as to its duties they did not exist for me. — 1 have said. Lytton, My No vel, II, X, Ch. XVII, 213.

Now to the English mind the placing of an adjunct or clause denoting a point of time in the past in the sentence or clause mostly severs, or at least weakens (100), the connexion of the past action or state with the present state of things, with the result that the preterite takes the place of the perfect. To a Dutchman this is not necessarily the case, any more than to a Frenchman or a German, and therefore in their language the use of such an