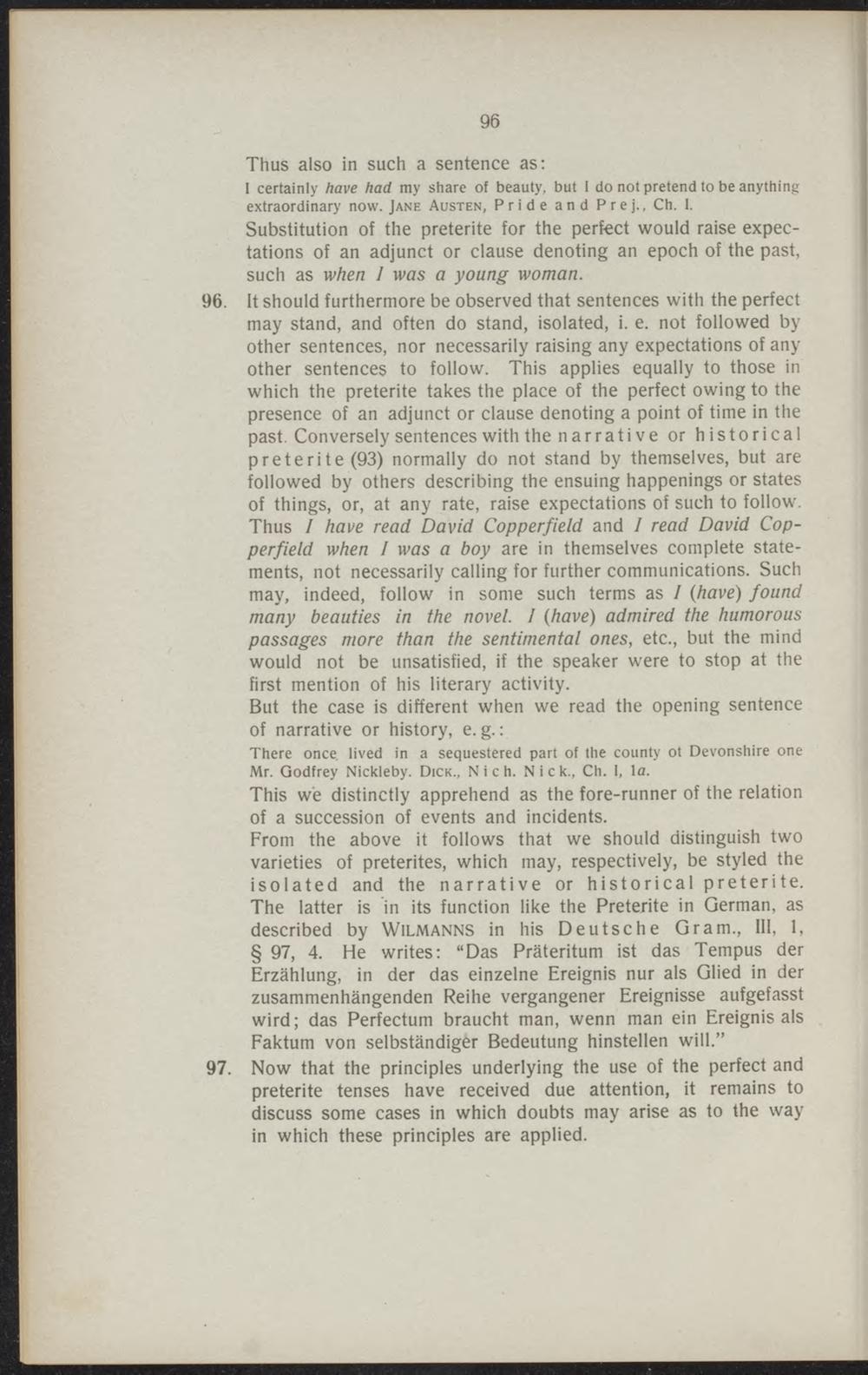 Thus also in such a sentence as:

i certainly have had my share of beauty, but i do not pretend to be anything extraordinary now. Jane Austen, Pride and Prej., Ch. 1. Substitution of the preterite for the perfect would raise expectations of an adjunct or clause denoting an epoch of the past, such as when I was a young woman.

It should furthermore be observed that sentences with the perfect may stand, and often do stand, isolated, i. e. not followed by other sentences, nor necessarily raising any expectations of any other sentences to follow. This applies equally to those in which the preterite takes the place of the perfect owing to the presence of an adjunct or clause denoting a point of time in the past. Conversely sentences with the narrative or historical preterite (93) normally do not stand by themselves, but are followed by others describing the ensuing happenings or states of things, or, at any rate, raise expectations of such to follow. Thus / have read David Copperfield and / read David Copperfield when I was a boy are in themselves complete statements, not necessarily calling for further Communications. Such may, indeed, follow in some such terms as / (have) found many beauties in the novel. I (have) admired the humorous passages more than the sentimental ones, etc, but the mind would not be unsatisfied, if the speaker were to stop at the first mention of his literary activity.

But the case is different when we read the opening sentence of narrative or history, e. g.:

There once. lived in a sequestered part of the county ot Devonshire one Mr. Godfrey Nickleby. Dick., N i c h. Nick, Ch. i, la. This we distinctly apprehend as the fore-runner of the relation of a succession of events and incidents. From the above it follows that we should distinguish two varieties of preterites, which may, respectively, be styled the isolated and the narrative or historical preterite. The latter is "in its function like the Preterite in German, as described by Wilmanns in his Deutsche Gram., III, 1, § 97, 4. He writes: "Das Prateritum ist das Tempus der Erzahlung, in der das einzelne Ereignis nur als Glied in der zusammenhangenden Reihe vergangener Ereignisse aufgefasst wird; das Perfectum braucht man, wenn man ein Ereignis als Faktum von selbstandiger Bedeutung hinstellen will." Now that the principles underlying the use of the perfect and preterite tenses have received due attention, it remains to discuss some cases in which doubts may arise as to the way in which these principles are applied.