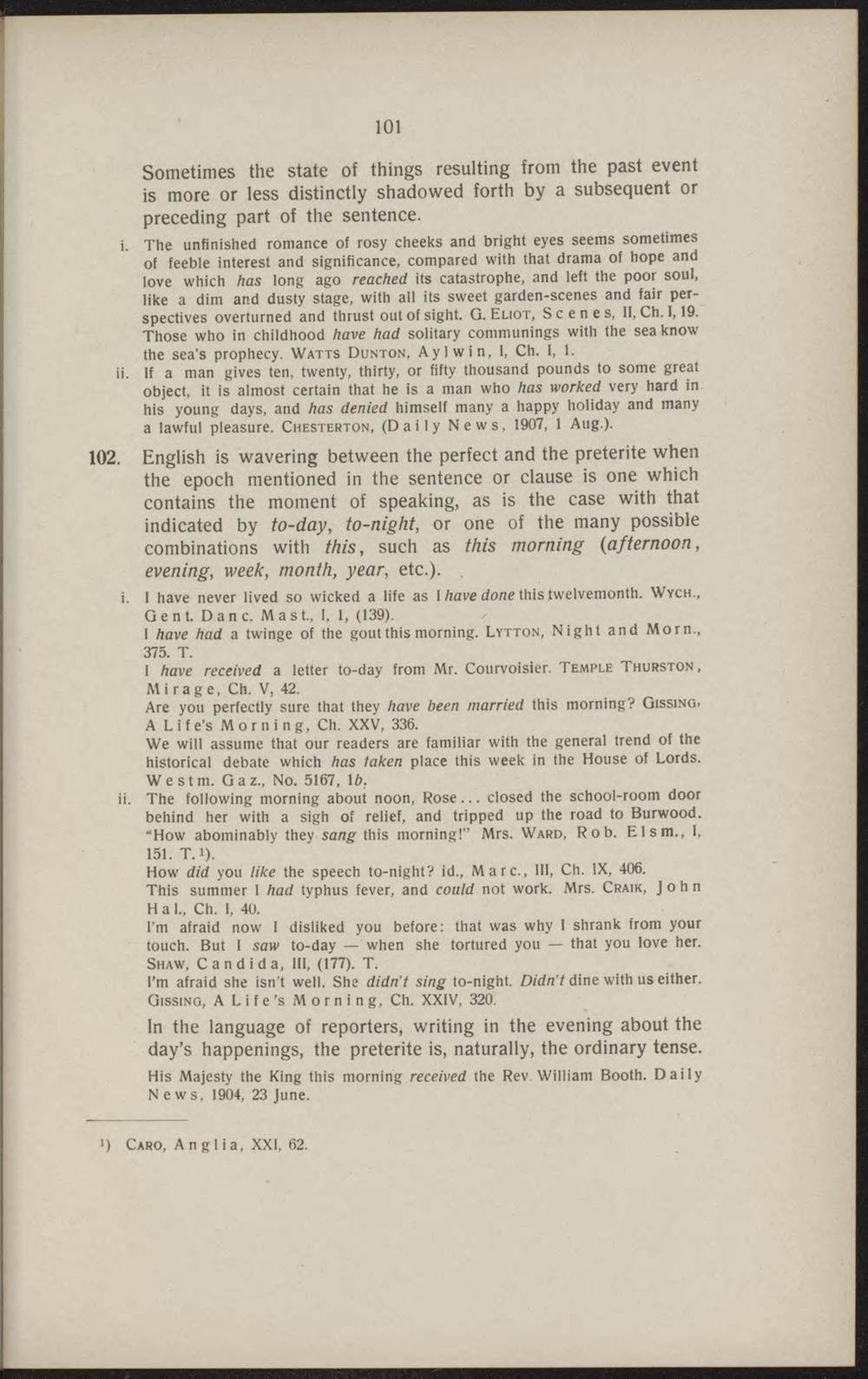 Sometimes the state of things resulting from the past event is more or less distinctly shadowed forth by a subsequent or preceding part of the sentence.

i. The unfinished romance of rosy cheeks and bright eyes seems sometimes of feeble interest and significance, compared with that drama of hope and love which Aas long ago reached its catastrophe, and left the poor soul, like a dim and dusty stage, with all its sweet garden-scenes and fair perspectives overturned and thrust out of sight. G. Eliot, Scènes, D, Ch. 1,19. Those who in childhood Aave Aad solitary communings with the sea know the sea's prophecy. Watts Dunton, Aylwin, I, Ch. I, 1.

ii. If a man gives ten, twenty, thirty, or fifty thousand pounds to some great object, it is almost certain that he is a man who Aas worked very hard in his young days, and Aas denied himself many a happy holiday and many a lawful pleasure. Chesterton, (Daily News, 1907, 1 Aug.).

102. English is wavering between the perfect and the preterite when the epoch mentioned in the sentence or clause is one which contains the moment of speaking, as is the case with that indicated by to-day, to-night, or one of the many possible combinations with this, such as this morning (afternoon, evening, week, month, year, etc). .

I Aave Aad a twinge of the gout this morning. Lytton, Night and Morn, 375. T.

We will assume that our readers are familiar with the general trend of the historical debate which Aas taken place this week in the House of Lords. Westm. Gaz, No. 5167, 16,

ii. The following morning about noon, Rose ... closed the school-room door behind her with a sigh of reliëf, and tripped up the road to Burwood. "How abominably they sang this morning!" Mrs. Ward, Rob. Elsm., I, 151. T.i).

This summer I Aad typhus fever, and could not work. Mrs. Craik, John

I'm afraid now I disliked you before: that was why I shrank from your touch. But I saw to-day — when she tortured you — that you love her. Shaw, Candida, III, (177). T.

In the language of reporters, writing in the evening about the day's happenings, the preterite is, naturally, the ordinary tense.