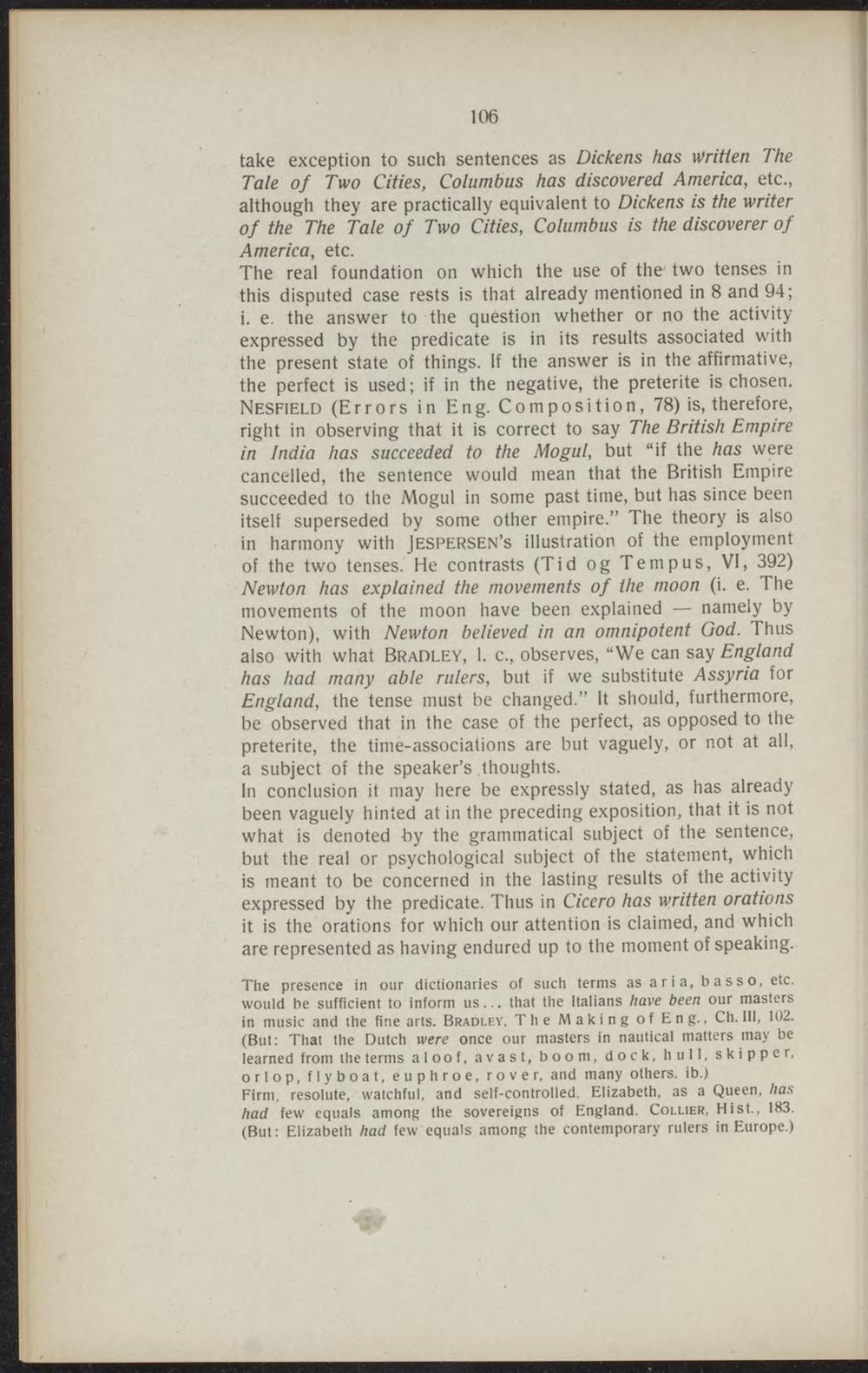 The real foundation on which the use of the' two tenses in this disputed case rests is that already mentioned in 8 and 94; i. e. the answer to the question whether or no the activity expressed by the predicate is in its results associated with the present state of things. If the answer is in the affirmative, the perfect is used; if in the negative, the preterite is chosen. Nesfield (Errors in Eng. Composition, 78) is, therefore, right in observing that it is correct to say The British Empire in India has succeeded to the Mogul, but "if the has were cancelled, the sentence would mean that the British Empire succeeded to the Mogul in some past time, but has since been itself superseded by some other empire." The theory is also in harmony with Jespersen's illustration of the employment of the two tenses. He contrasts (Tid og Tempus, VI, 392) Newton has explained the movements of the moon (i. e. The movements of the moon have been explained — namely by Newton), with Newton believed in an omnipotent God. Thus also with what Bradley, 1. c, observes, "We can say England has had many able miers, but if we substitute Assyria for England, the tense must be changed." It should, furthermore, be observed that in the case of the perfect, as opposed to the preterite, the time-associations are but vaguely, or not at all, a subject of the speaker's thoughts.

In conclusion it may here be expressly stated, as has already been vaguely hinted at in the preceding exposition, that it is not what is denoted by the grammatical subject of the sentence, but the real or psychological subject of the statement, which is meant to be concerned in the lasting results of the activity expressed by the predicate. Thus in Cicero has written orations it is the orations for which our attention is claimed, and which are represented as having endured up to the moment of speaking.

The presence in our dictionaries of such terms as aria, basso, etc. would be sufficiënt to inform us... that the Italians have been our masters in music and the fine arts. Bradley, The Making of Eng., Ch.lil, 102. (But: That the Dutch were once our masters in nautical matters may be learned from the terms aloof, avast, boom, doek, huil, skipper, orlop, flyboat, euphroe, rover, and many others. ib.) Firm, resolute, watchful, and self-controlled, Elizabeth, as a Queen, has had few equals among the sovereigns of England. Collier, Hist, 183. (But: Elizabeth had few equals among the contemporary rulers in Europe.)