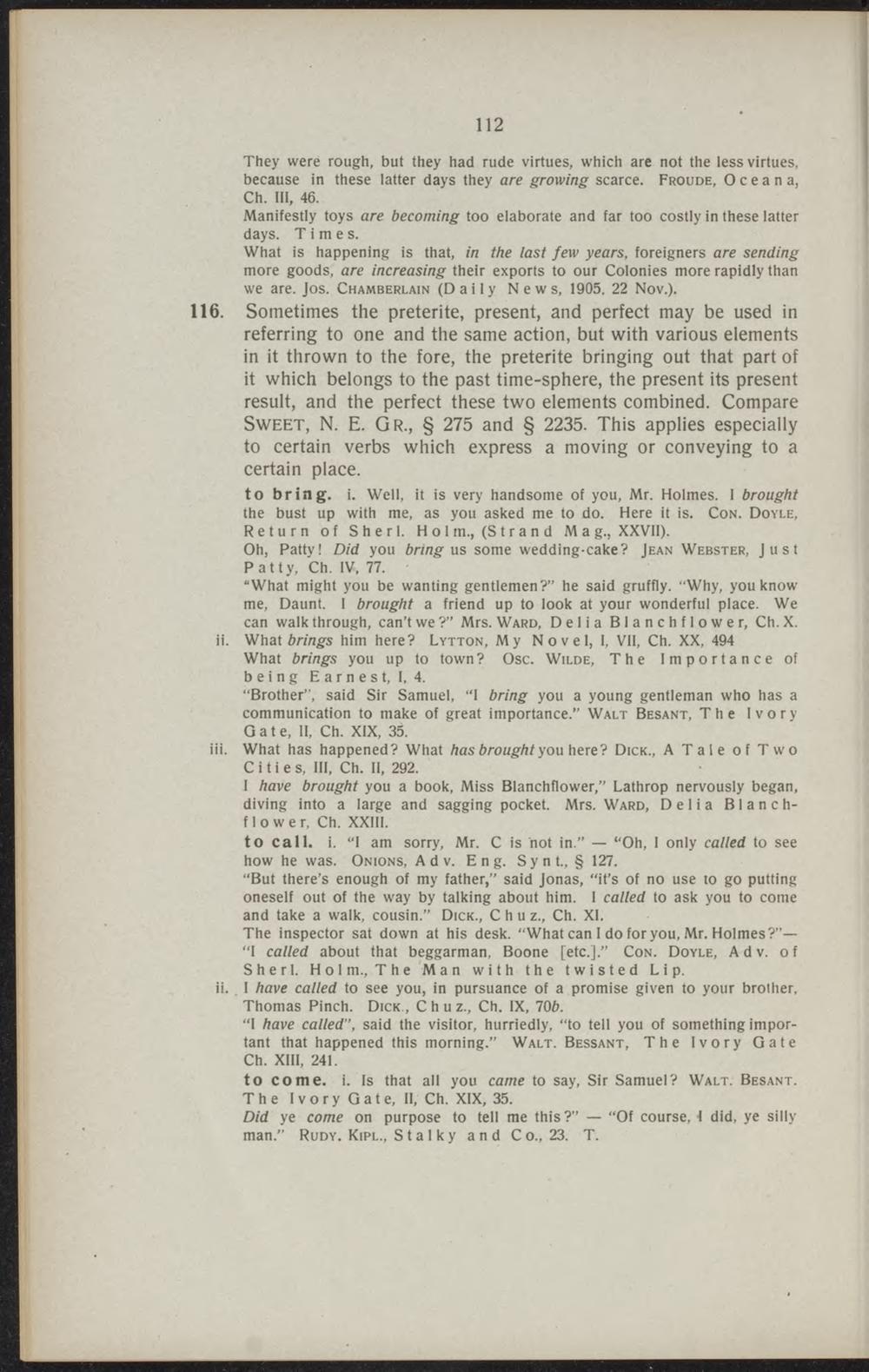 They were rough, but they had rude virtues, which are not the less virtues, because in these latter days they are growing scarce. Froude, O c e a n a, Ch. Ui, 46.

Manifestly toys are becoming too elaborate and far too costly in these latter days. Times.

What is happening is that, in the last few years, foreigners are sending more goods, are increasing their exports to our Colonies more rapidly than we are. Jos. Chamberlain (Daily News, 1905. 22 Nov.). 116. Sometimes the preterite, present, and perfect may be used in referring to one and the same action, but with various elements in it thrown to the fore, the preterite bringing out that part of it which belongs to the past time-sphere, the present its present result, and the perfect these two elements combined. Compare Sweet, N. E. Gr, § 275 and § 2235. This applies especially to certain verbs which express a moving or conveying to a certain place.

"What might you be wanting gentlemen?" he said gruffly. "Why, you know me, Daunt. I brought a friend up to look at your wonderful place. We can walk through, can't we ?" Mrs. Ward, Delia Blanchflower, Ch. X. ii. What brings him here? Lytton, My No vel, I, VII, Ch. XX, 494

What brings you up to town? Osc. Wilde, The Importance of being Earnest, I, 4.

"But there's enough of my father," said Jonas, "ifs of no use to go putting oneself out of the way by talking about him. I called to ask you to come and take a walk, cousin." Dick, Chuz, Ch. XI.

The inspector sat down at his desk. "What can I do for you, Mr. Holmes?"— "I called about that beggarman, Boone [etc.]." Con. Doyle, Adv. of Sherl. Hol m, The Man with the twisted Lip. ii.. I have called to see you, in pursuance of a promise given to your brother, Thomas Pinch. Dick, Chuz, Ch. IX, 706.

"I Aave called", said the visitor, hurriedly, "to teil you of something important that happened this morning." Walt. Bessant, The Ivory Qate Ch. XIII, 241.