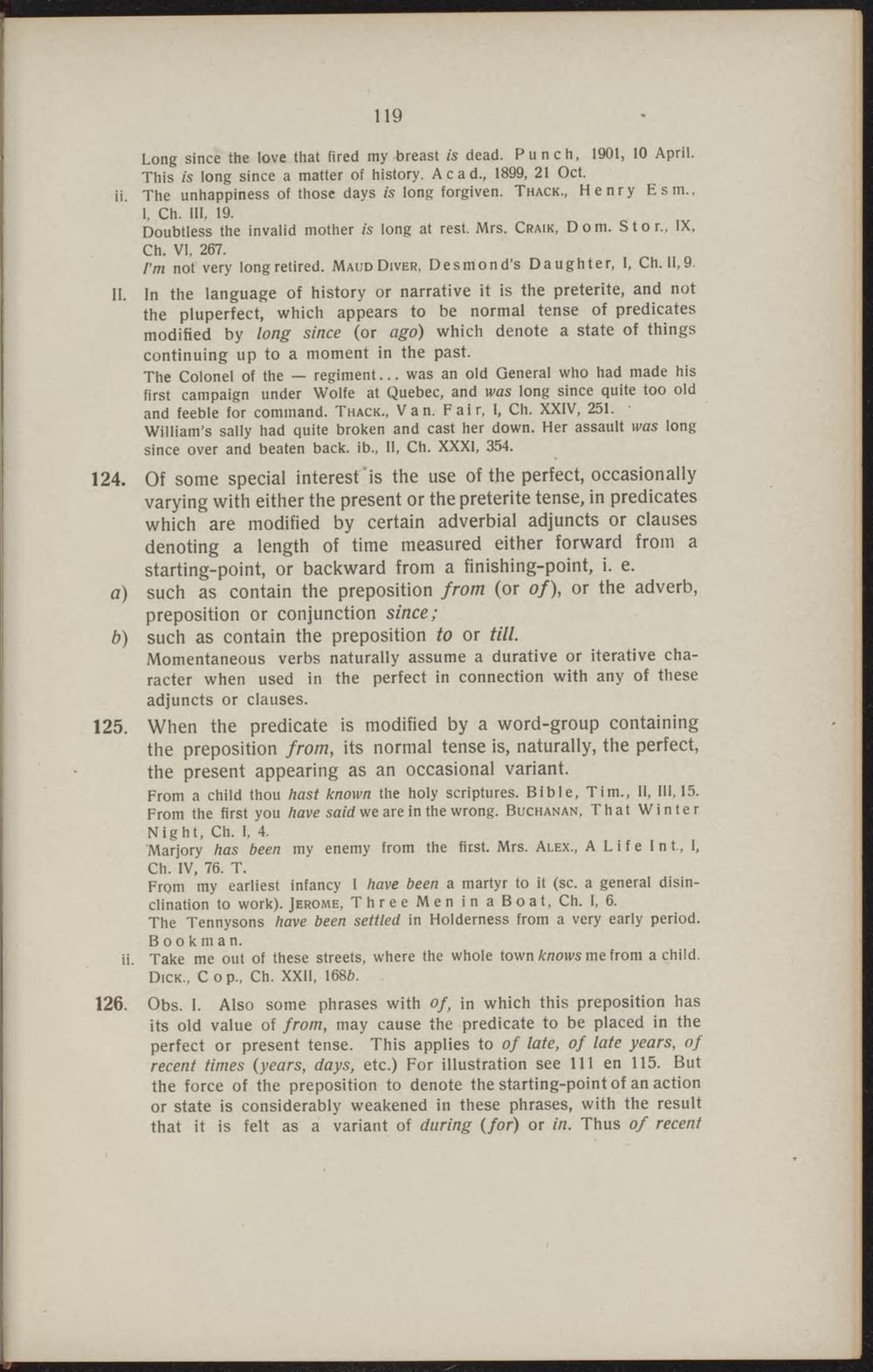 Pm not very longretired. MaudDiver, Desmond's Daughter, I, Ch. 11,9. II. In the language of history or narrative it is the preterite, and not the pluperfect, which appears to be normal tense of predicates modified by long since (or ago) which denote a state of things continuing up to a moment in the past.

The Colonel of the — regiment... was an old General who had made his first campaign under Wolfe at Quebec, and was long since quite too old and feeble for command. Thack, Van. Fair, I, Ch. XXIV, 251. William's sally had quite broken and cast her down. Her assault was long since over and beaten back. ib, II, Ch. XXXI, 354.

124. Of some special interest'is the use of the perfect, occasionally varying with either the present or the preterite tense, in predicates which are modified by certain adverbial adjuncts or clauses denoting a length of time measured either forward from a starting-point, or backward from a finishing-point, i. e.

a) such as contain the preposition from (or of), or the adverb, preposition or conjunction since;

b) such as contain the preposition to or till.

Momentaneous verbs naturally assume a durative or iterative character when used in the perfect in connection with any of these adjuncts or clauses.

125. When the predicate is modified by a word-group containing the preposition from, its normal tense is, naturally, the perfect, the present appearing as an occasional variant.

From a child thou hast known the holy scriptures. Bible, Tim, II, III, 15. From the first you have said we are in the wrong. Buchanan, That Winter Night, Ch. I, 4.

From my earllest infancy I have been a martyr to it (sc. a general disinclination to work). Jerome, Three Men in aBoat, Ch. I, 6. The Tennysons have been settled in Hol derness from a very early period. B oo k m an.

126. Obs. I. Also some phrases with of, in which this preposition has its old value of from, may cause the predicate to be placed in the perfect or present tense. This applies to of late, of late years, of recent times (years, days, etc.) For illustration see 111 en 115. But the force of the preposition to denote the starting-point of an action or state is considerably weakened in these phrases, with the result that it is feit as a variant of during (for) or in. Thus of recent