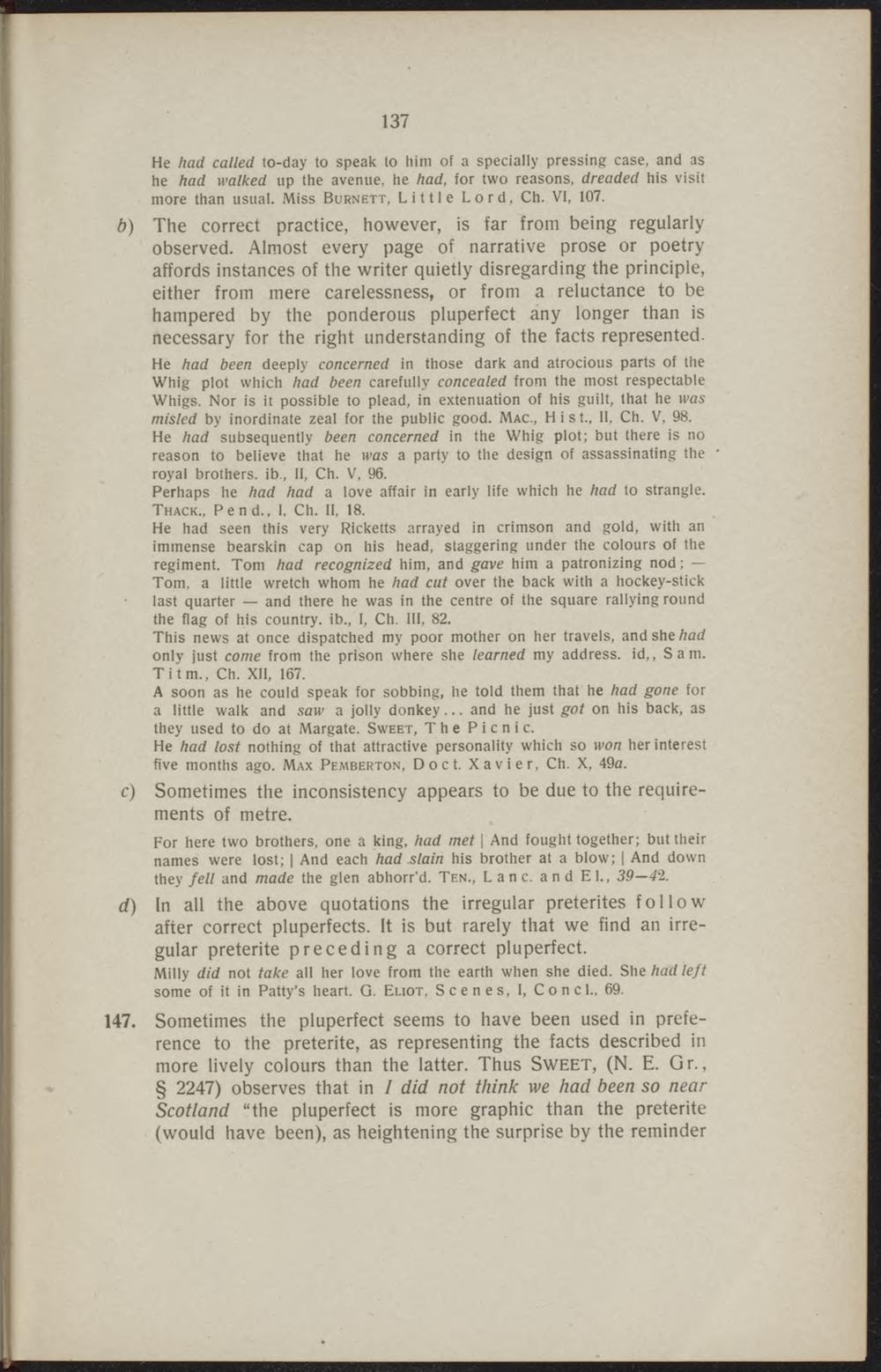 He had called to-day to speak to him of a specially pressing case, and as he had walked up the avenue, he had, for two reasons, dreaded his visit more than usual. Miss Burnëtt, Little Lord, Ch. Vi, 107.

b) The correct practice, however, is far from being regularly observed. Almost every page of narrative prose or poetry affords instances of the writer quietly disregarding the principle, either from mere carelessness, or from a reluctance to be hampered by the ponderous pluperfect any longer than is necessary for the right understanding of the facts represented.

He had been deeply concerned in those dark and atrocious parts of the Whig plot which had been carefully concealed from the most respectable Whigs. Nor is it possible to plead, in extenuation of his guilt, that he was misled by inordinate zeal for the public good. Mac, Hist., II, Ch. V, 98. He had subsequently been concerned in the Whig plot; but there is no reason to believe that he was a party to the design of assassinating the royal brothers. ib, II, Ch. V, 96.

Perhaps he had had a love affair in early life which he had to strangle. Thack, Pen d, I, Ch. II, 18.

He had seen this very Rlcketts arrayed in crimson and gold, with an immense bearskin cap on his head, staggering under the colours of the regiment. Tom had recognized him, and gave him a patronizing nod; — Tom, a little wretch whom he had cut over the back with a hockey-stick last quarter — and there he was in the centre of the square rallying round the flag of his country, ib, I, Ch. III, 82.

This news at once dispatched my poor mother on her travels, and she had only Just come from the prison where she learned my address. id,, Sam. Titm, Ch. XII, 167.

A soon as he could speak for sobbing, he told them that he had gone for a little walk and saw a jolly donkey... and he just got on his back, as they used to do at Margate. Sweet, The P i c n i c. He had lost nothing of that attractive personality which so won her interest five months ago. Max Pemberton, Doet. Xavier, Ch. X, 49a.

c) Sometimes the inconsistency appears to be due to the requirements of metre.

For here two brothers, one a king. had met | And fought together; but their names were lost; | And each had slain his brother at a blow; | And down they feil and made the glen abhorr'd. Ten, Lanc. and El, 39—41.

Milly did not take all her love from the earth when she died. She had left some of it in Patty's heart. Q. Eliot, Scènes, I, Co nel, 69.

147. Sometimes the pluperfect seems to have been used in preference to the preterite, as representing the facts described in more lively colours than the latter. Thus SWEET, (N. E. Gr., § 2247) observes that in / did not think we had been so near Scotland "the pluperfect is more graphic than the preterite (would have been), as heightening the surprise by the reminder