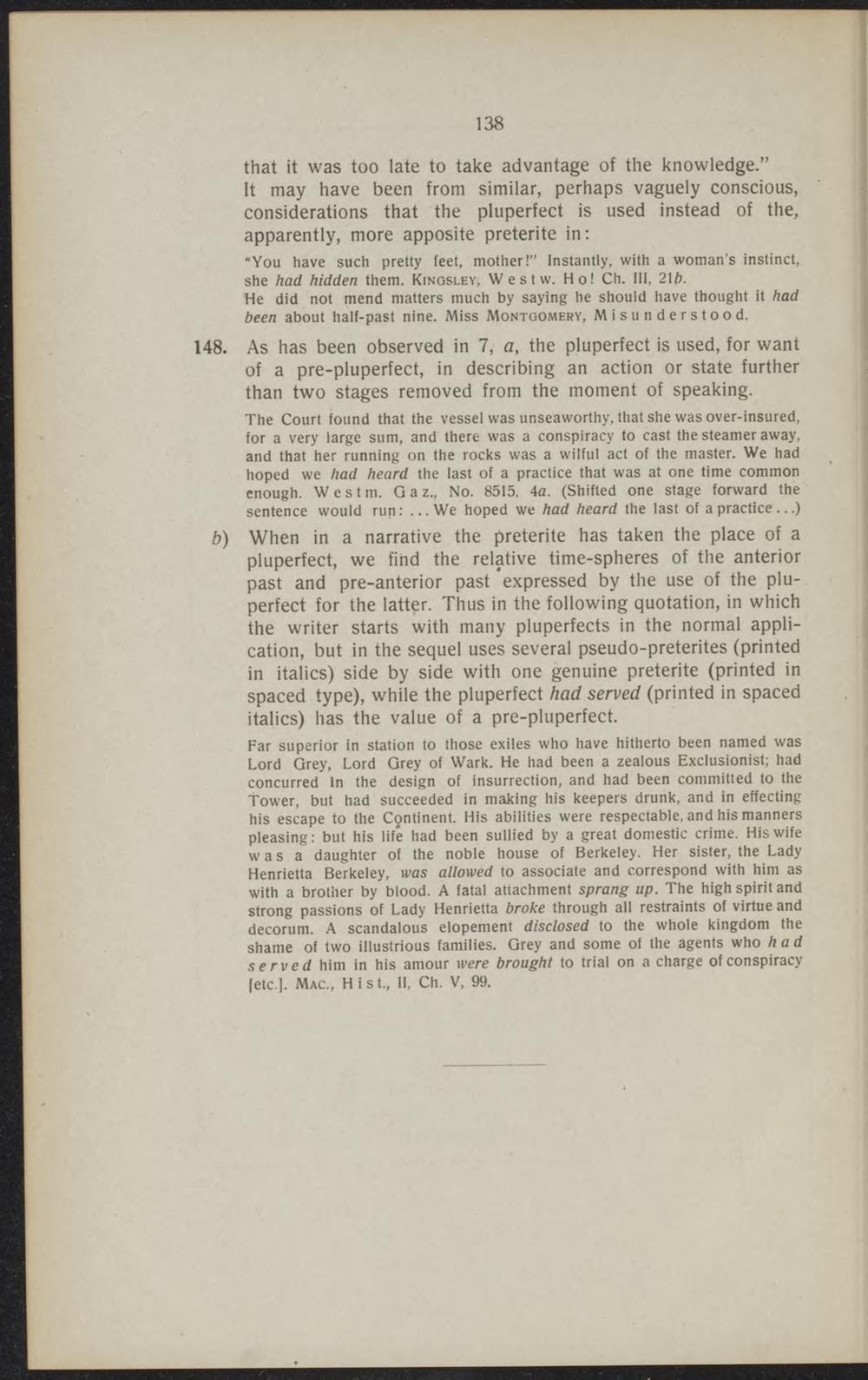 that it was too late to take advantage of the knowledge." It may have been from similar, perhaps vaguely conscious, considerations that the pluperfect is used instead of the, apparently, more apposite preterite in:

"You have such pretty feet, mother 1" Instantly, with a woman's instinct, she had hidden them. Kinosley, Westw. Ho! Ch. III, 21ö. He did not mend matters much by saying he should have thought it had been about half-past nine. Miss Montoomery, Misunderstood.

148. As has been observed in 7, a, the pluperfect is used, for want of a pre-pluperfect, in describing an action or state further than two stages removed from the moment of speaking. The Court found that the vessel was unseaworthy, that she was over-insured, for a very large sum, and there was a conspiracy to cast the steamer away, and that her running on the rocks was a wilful act of the master. We had hoped we had heard the last of a practice that was at one time common enough. Westm. Gaz., No. 8515, 4a. (Shifled one stage forward the sentence would run: ... We hoped we had heard the last of a practice...)

b) When in a narrative the preterite has taken the place of a pluperfect, we find the relative time-spheres of the anterior past and pre-anterior past expressed by the use of the pluperfect for the latter. Thus in the following quotation, in which the writer starts with many pluperfects in the normal application, but in the sequel uses several pseudo-preterites (printed in italics) side by side with one genuine preterite (printed in spaced type), while the pluperfect had served (printed in spaced italics) has the value of a pre-pluperfect.

Far superior in station to those exiles who have hitherto been named was Lord Grey, Lord Grey of Wark. He had been a zealous Exclusionist; had concurred in the design of insurrection, and had been committed to the Tower, but had succeeded in making his keepers drunk, and in effecting his escape to the Continent. His abilities were respectable, and his manners pleasing: but his life had been sullied by a great domestic crime. His wife w a s a daughter of the noble house of Berkeley. Her sister, the Lady Henrietta Berkeley, was allowed to associate and correspond with him as with a brother by blood. A fatal attachment sprang up. The high spirit and strong passions of Lady Henrietta broke through all restraints of virtue and decorum. A scandalous elopement disclosed to the whole kingdom the shame of two illustrious families. Grey and some of the agents who had served him in his amour were brought to trial on a charge of conspiracy [etc.]. Mac, Hist, II, Ch. V, 99.