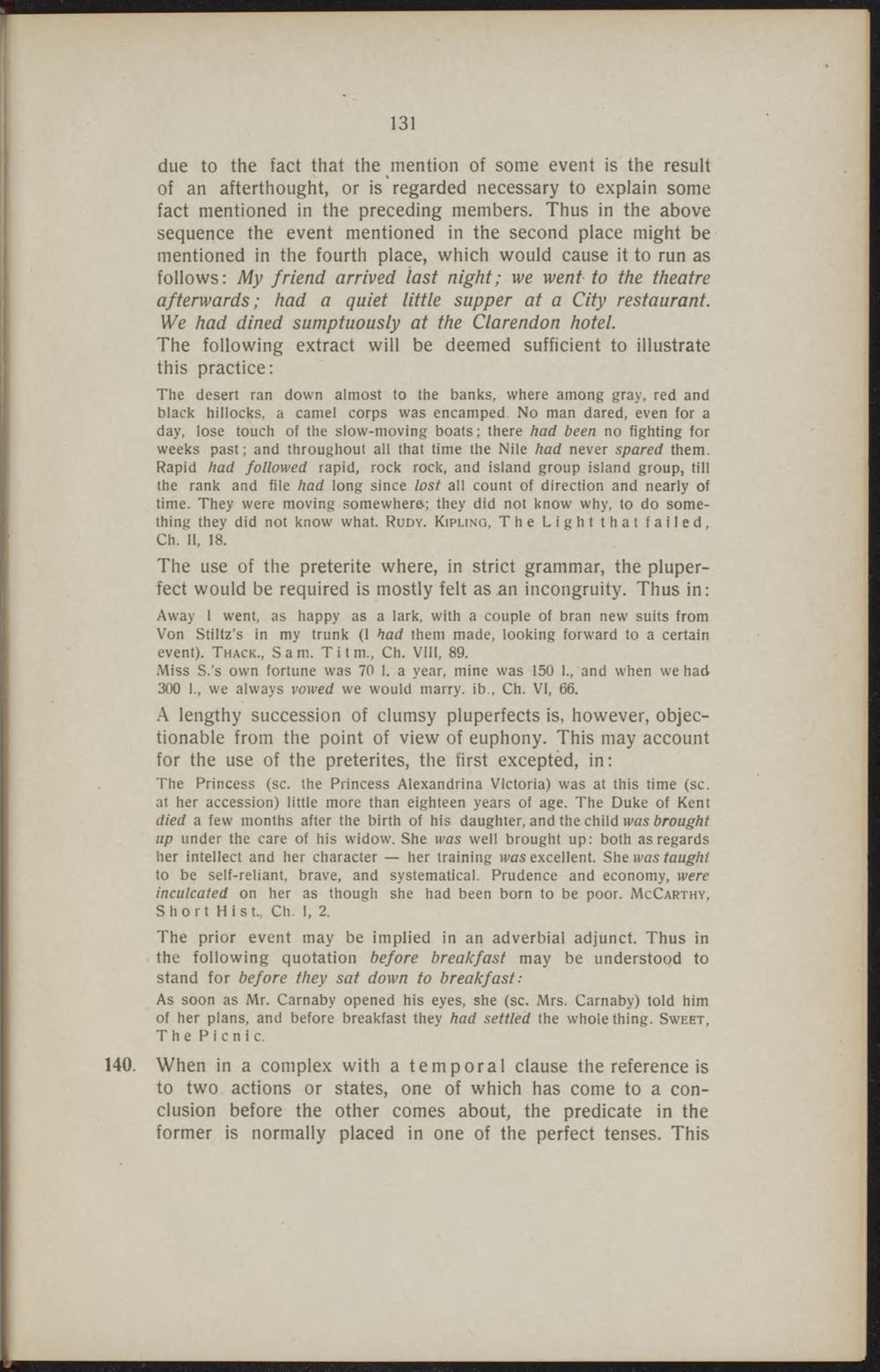 due to the fact that the mention of some event is the result of an afterthought, or is regarded necessary to explain some fact mentioned in the preceding members. Thus in the above sequence the event mentioned in the second place might be mentioned in the fourth place, which would cause it to run as follows: My friend arrived last night; we went to the theatre afterwards; had a quiet little supper at a City restaurant. We had dined sumptuously at the Clarendon hotel. The following extract will be deemed sufficiënt to illustrate this practice:

The desert ran down almost to the banks, where among gray, red and black hillocks, a camel corps was encamped. No man dared, even for a day, lose touch of the slow-moving boats; there had been no fighting for weeks past; and throughout all that time the Nile had never spared them. Rapid had followed rapid, rock rock, and island group island group, till the rank and file had long since lost all count of direction and nearly of time. They were moving somewhere; they did not know why, to do something they did not know what. Rudy. Kiplino, The Light that failed, Ch. Ii, 18.

The use of the preterite where, in strict grammar, the pluperfect would be required is mostly feit as an incongruity. Thus in:

Away I went, as happy as a lark, with a couple of bran new suits from Von Stiltz's in my trunk (I had them made, looking forward to a certain event). Thack, Sam. Titm, Ch. VIII, 89.

A lengthy succession of clumsy pluperfects is, however, objectionable from the point of view of euphony. This may account for the use of the preterites, the first exceptèd, in: The Princess (sc. the Princess Alexandrina Victoria) was at this time (sc. at her accession) little more than eighteen years of age. The Duke of Kent died a few months after the birth of hls daughter, and the child was brought up under the care of his widow. She was well brought up: both asregards her intellect and her character — her training was excellent. She was taughi to be self-reliant, brave, and systematical. Prudence and economy, were inculcated on her as though she had been bom to be poor. McCarthy, Short HI s t, Ch. I, "2.

The prior event may be implied in an adverbial adjunct. Thus in the following quotation before breakfast may be understood to stand for before they sat down to breakfast:

As soon as Mr. Carnaby opened hls eyes, she (sc. Mrs. Carnaby) told him of her plans, and before breakfast they had settled the whole thing. Sweet, The P i c n i c.

140. When in a complex with a temporal clause the reference is to two actions or states, one of which has come to a conclusion before the other comes about, the predicate in the former is normally placed in one of the perfect tenses. This