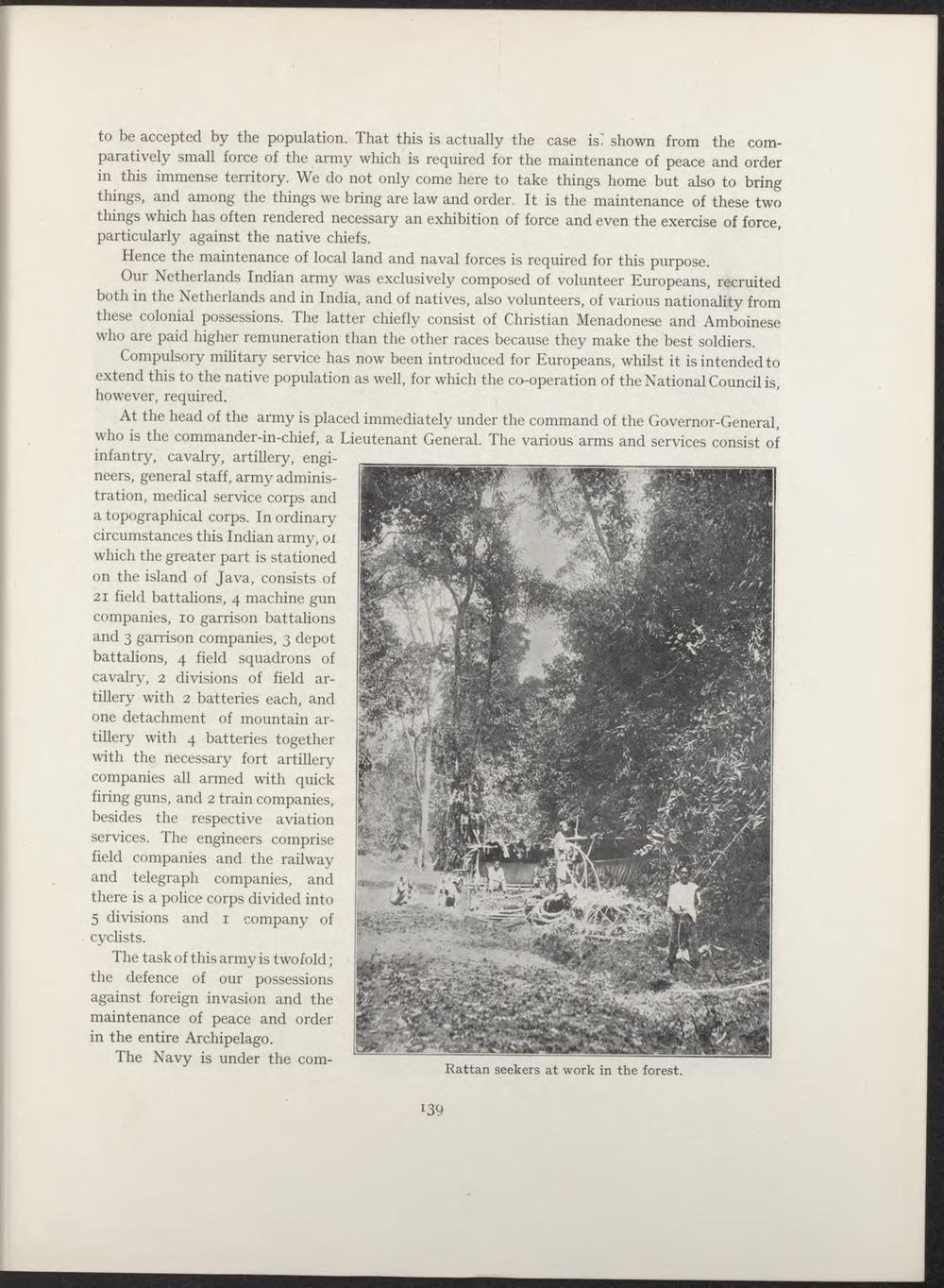 to be accepted by the population. That this is actually the case isT shown from the comparatively small force of the army which is required for the maintenance of peace and order in this immense territory. We do not only come here to take things home but also to bring things, and among the things we bring are law and order. It is the maintenance of these two things which has often rendered necessary an exhibition of force and even the exercise of force, particularly against the native chiefs.

Hence the maintenance of local land and naval forces is required for this purpose.

Our Netherlands Indian army was exclusively composed of volunteer Europeans, recruited both in the Netherlands and in India, and of natives, also volunteers, of various nationality from these colonial possessions. The latter chiefly consist of Christian Menadonese and Amboinese who are paid higher remuneration than the other races because they make the best soldiers.

Compulsory müitary service has now been introduced for Europeans, whilst it is intended to extend this to the native population as well, for which the co-operation of the National Council is, however, required.

At the head of the army is placed immediately under the command of the Governor-General, who is the commander-in-chief, a Lieutenant General. The various arms and services consist of

intantry, cavalry, artulery, engineers, general staff, army administration, medical service corps and a topographical corps. In ordinary circumstances this Indian army, of which the greater part is stationed on the island of Java, consists of 21 field battalions, 4 machine gun companies, 10 garrison battalions and 3 garrison companies, 3 depot battalions, 4 field squadrons of cavalry, 2 divisions of field artillery with 2 batteries each, and one detachment of mountain artillery with 4 batteries together with the necessary fort artillery companies all armed with quick firing guns, and 2 train companies, besides the respective aviation services. The engineers comprise field companies and the railway and telegraph companies, and there is a police corps divided into 5 divisions and 1 company of cychsts.

The task of this army is twof old ; the defence of our possessions against foreign invasion and the maintenance of peace and order in the entire Archipelago.

Rattan seekers at work in the forest.