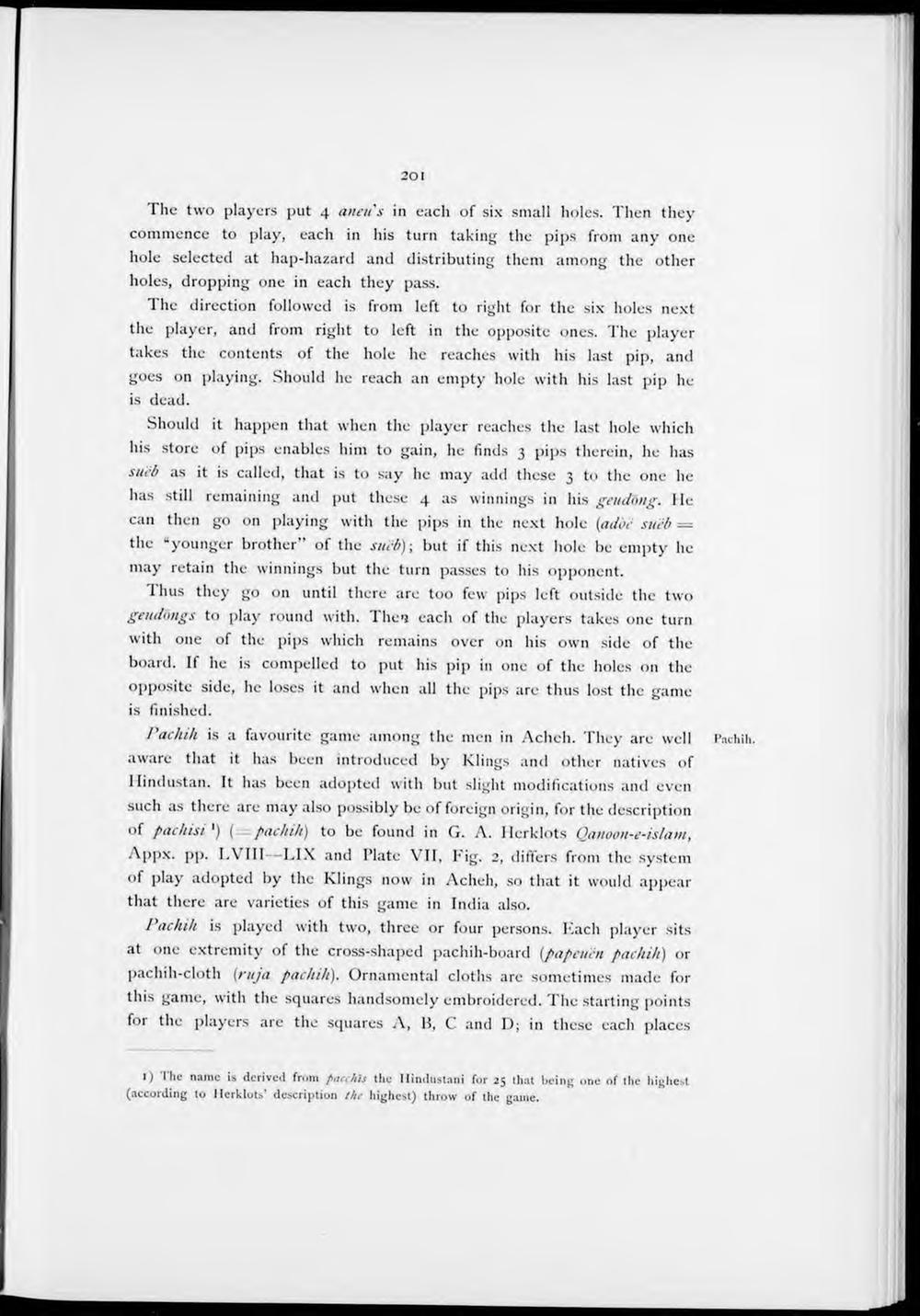 The two players put 4 aneus in each of six small holes. Then they commence to play, each in his turn taking the pips from any one hole selected at hap-hazard and distributing them among the other holes, dropping one in each they pass.

The direction followed is from left to right for the six holes next the player, and from right to left in the oppositc ones. The player takes the contents of the hole he reaches with his last pip, and goes on playing. Should he reach an empty hole with his last pip he is dead.

Should it happen that when the player reaches the last hole which his store of pips enables him to gain, he finds 3 pips therein, he lias suëb as it is called, that is to say he may add these 3 to the one he lias still remaining and put these 4 as winnings in his gendong. He can then go on playing with the pips in the next hole (adöc suëb = the "younger brother" of the suëb) -, but if this next hole be empty he may retain the winnings but the turn passes to his opponent.

Thus they go 011 until there are too few pips left outside thc two gendöngs to play round with. Thei each of the players takes one turn with one of the pips which remains over on his own side of the board. If he is compelled to put his pip in one of the holes 011 the opposite side, he loses it and when all the pips are thus lost thc game is finished.

Pachih is a favourite game among the men in Acheh. They are well Pachih. aware that it lias been introduced by Klings and other natives of Hindustan. It has been adopted with but slight modifications and even such as there are may also possibly be of foreign origin, for the description of pachisi ') ( pachih) to be found in G. A. Herklots Qanoon-e-islatn,

Appx. pp. LVIII—LIX and Platc VII, Fig. 2, differs from the system of play adopted by the Klings now in Acheh, so that it would appear that there are varieties of this game in India also.

Pachih is played with two, three or four persons. Each player sits at one extremity of the cross-shaped pachih-board {papenen pachih) or pachih-cloth (ruja pachih). Ornamental cloths are sometimes made for this game, witli the squares handsomely embroidered. Thc starting points for thc players are the squares A, B, C and D; in these each places

1) The name is derived from pacchis the Ilindustani for 25 that being one of thc highest (according to Herklots' description thc highest) throw of the game.