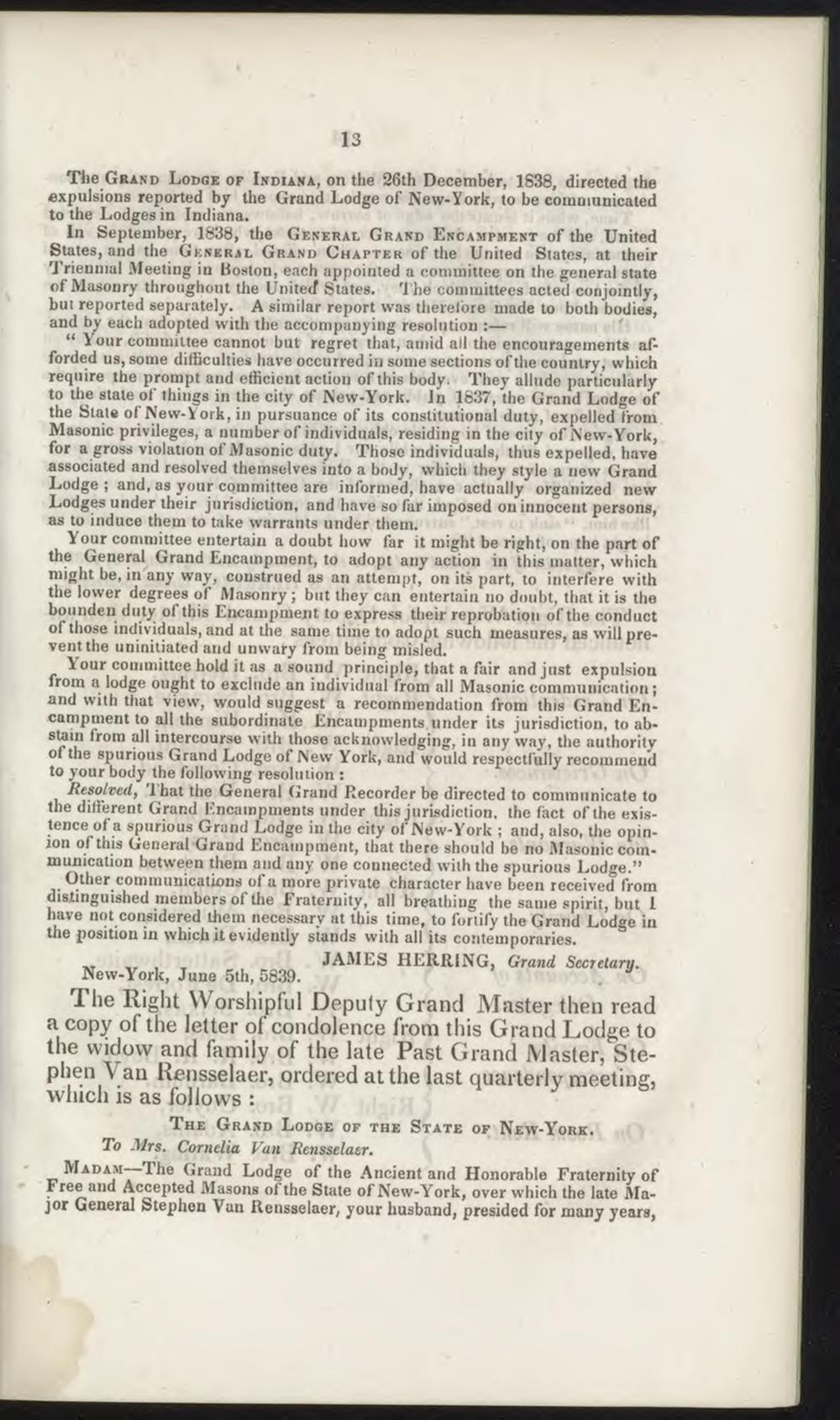 In September,^ 1838, the General Grand Encampment of the United States, and the General Grand Chapter of the United States, at their Triennial Meeting in Boston, each appointed a committee on the general state of Masonry throughout the Unitecf States. The committees acted conjointly, but reported separately. A similar report was therelöre made to both bodies, and by each adopted with the accompanying resolution :—

" Your committee cannot but regret that, amid all the encouragements af> forded us, some difficulties have occurred in some sections of the country, which require the prompt and efficient action of this body. They aliude particularly to the state of things in the city of New-York. In 1837, the Grand Lodge of the State of New-York, in pursuance of its constitutional duty, expelled froin Masonic privileges, a number of individuals, residing in the city of JNew-YorU, for a gross violation of Masonic duty. Those individuals, thus expelled, have associated and resolved themselves into a body, which they style a new Grand Lodge ; and, as your committee are informed, have actually organized new Lodges under their jurisdiction, and have so far imposed on innocent persons, as to induce them to take warrants under them.

Your committee entertain a doubt how far it might be right, on the part of the General Grand Encampment, to adopt any action in this matter, which might be, in any way, construed as an attempt, on its part, to interfere with the lower degrees of Masonry; but they can entertain no doubt, that it is the bounden duty of this Encampment to express their reprobation of the conduct of those individuals, and at the same time to adopt such measures, as will prevent the uninitiated and unwary from being misled.

Your committee hold it as a sound principle, that a fair and jast expulsion from a lodge ought to exclude an iudividual from all Masonic communication; and with that view, would suggest a recommendation from this Grand Encampment to all the subordinate Encampments under its jurisdiction, to abstain from all intercourse with those acknowledging, in any way, the authority of the spurious Grand Lodge of New York, and would respectfully recommend to your body the following resolntion :

Resolved, 1 hat the General Grand Recorder be directed to communicate to the different Grand Encampments under this jurisdiction, the fact of the existence of a spurious Grand Lodge in the city of New-York ; and, also, the opinjon of this General Grand Encampment, that there should be no Masonic communication between them and any one connected with the spurious Lodge."

Other communications of a more private character have been received from distinguished members of the Fraternity, all breathing the same spirit, but 1 have not considered them necessary at this time, to fortify the Grand Lodge in the positionin which it evidently stands with all its contemporaries.

The Right VVorshipful Depuly Grand Master then read a copy of the letter of condolence from this Grand Lodge to the widovv and family of the late Past Grand JV1 aster, Stephen Van Rensselaer, ordered at the last quarterly meeting, which is as follows :

The Grand Lodge of the State of New-York.

Madam-—The Grand Lodge of the Ancient and Honorable Fraternity of F ree and Accepted Masons of the State of New-York, over which the late Major General Stephen Van Rensselaer, your husband, presidcd for many years,