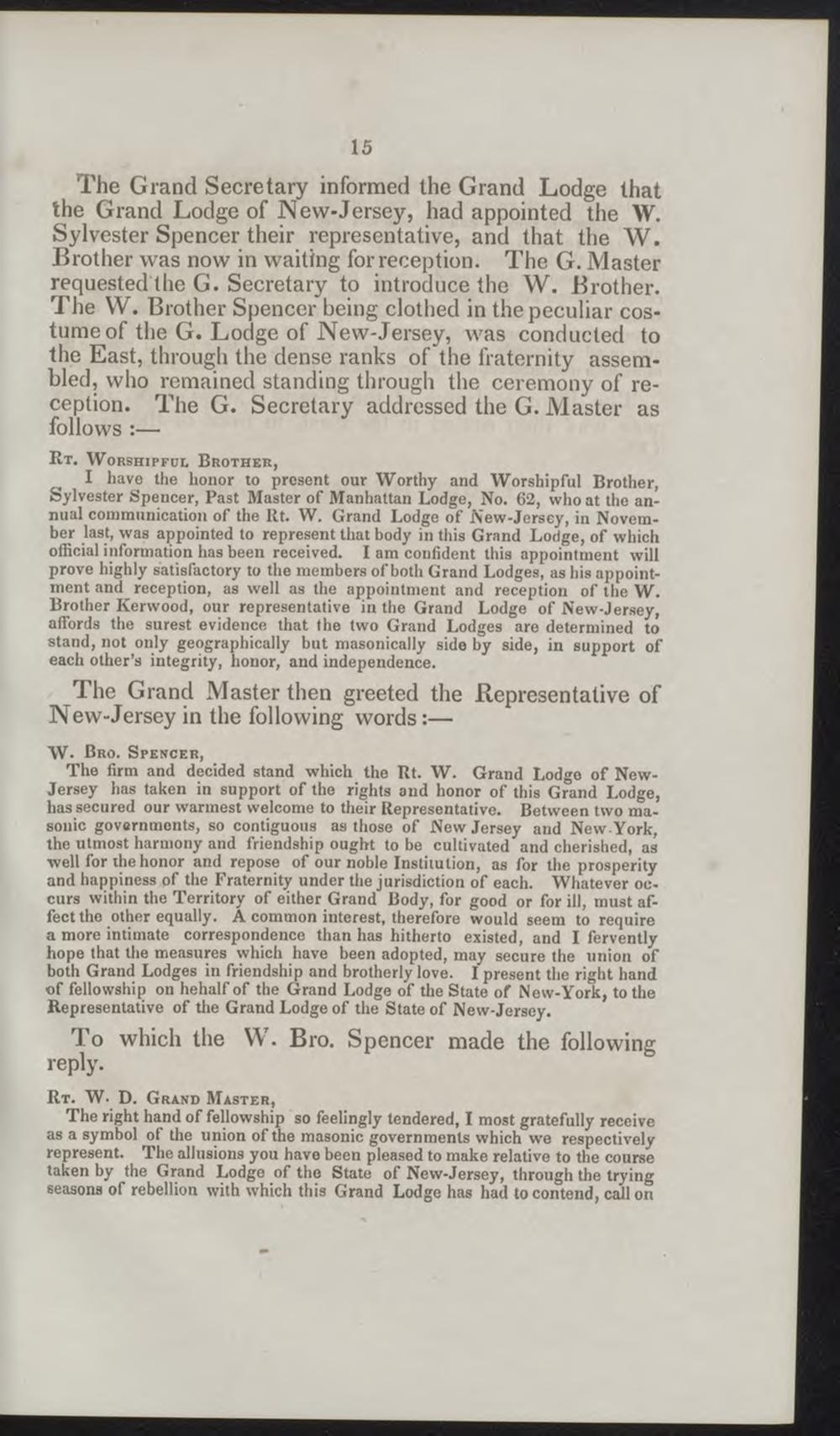 The Grand Secretary informed the Grand Lodge that the Grand Lodge of New-Jersey, had appointed the W. Sylvester Spencer their representative, and that the W. Brother was now in waiting for reception. The G. Master requested the G. Secretary to introducé the W. Brother. The W. Brother Spencer being clothed in thepeculiar costumeof the G. Lodge of New-Jersey, was conducted to the East, through the dense ranks of the fraternity assembied, who remained standing through the ceremony of reception. The G. Secretary addressed the G. Master as follows :—

I have the lionor to present our Worthy and Worshipful Brother, Sylvester Spencer, Past Master of Manhattan Lodge, No. 62, who at the annual communication of the Rt. W. Grand Lodge of New-Jersey, in November last, was appointed to represent that body in this Grand Lodge, of which official information has been received. I am confident this appointment will prove highly satisfactory to the members of both Grand Lodges, as his appointment and reception, as well as the appointment and reception of the W. Brother Kerwood, our representative in the Grand Lodge of New-Jersey, afFords the surest evidence that the two Grand Lodges are determined to stand, not only geographically but masonically side by side, in support of each other's integrity, honor, and independence.

The Grand Master then greeted the Representative of New-Jersey in the following words:—

The firm and decided stand which the Rt. W. Grand Lodge of NewJersey has taken in support of the rights and honor of this Grand Lodge, has secured our wannest welcome to their Representative. Between two masonic governments, so contiguous as those of New Jersey and New.York, the utmost harmony and friendship ought to be cultivated and cherished, as ■well for the honor and repose of our noble Institution, as for the prosperity and happiness of the Fraternity under the jurisdiction of each. Whatever occurs within the Territory of either Grand Body, for good or for ill, must affect the other equally. A common interest, therefore would seem to require a more intimate correspondence than has hitherto existed, and I fervently hope that the measures which have been adopted, may secure the union of both Grand Lodges in friendship and brotherly love. I present the right hand of fellowship on hehalf of the Grand Lodge of the State of New-York, tothe Representative of the Grand Lodge of the State of New-Jersey.

To which the W. Bro. Spencer made the following reply.

The right hand of fellowship so feelingly tendered, I most gratefully receive as a symbol of the union of the masonic governments which we respectively represent. The allusions you have been pleased to make relative to the course taken by the Grand Lodge of the State of New-Jersey, through the trying seasons of rebellion with which this Grand Lodge has had tocontend, callon