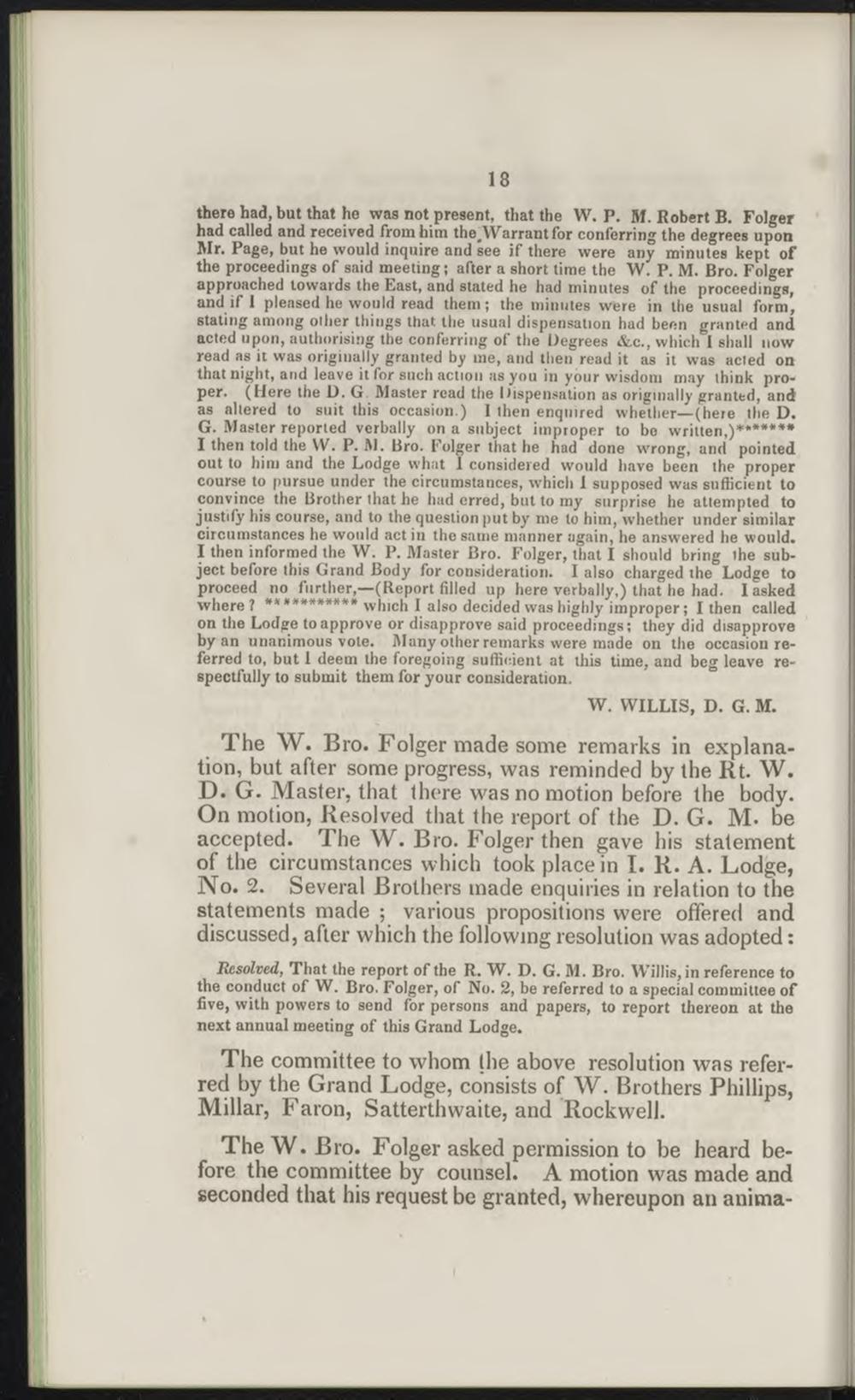 there had, but that he was not present, that the W. P. M. Robert B. Folger had called and received fromhim the.Warrantfor conferring the degrees upon Mr. Page, but he would inquire and see if there were any minutes kept of the proceedings of said meeting; alter a short time the W. P. M. Bro. Folger approached towards the East, and stated he had minutes of the proceedings, and if 1 pleased he would read them; the minutes were in the usual form, stating among other things that the usual dispensation had been granted and acted upon, authorising the conferring of the Degrees &c., which I shall now read as it was origiually granted by me, and tlien read it as it was acted on that night, and leave it for such action as you in your wisdom may ihink proper. (Here the D. G Master read the iJispensation as origiually granted, and as altered to snit this occasion.) I tlien enquired whetlier—(hete the D. G. Master reported verbally on a subject improper to be written,)*«****» I then told the VV. P. M. Bro. Folger that he had done wrong, and pointed out to hini and the Lodge what 1 considered would have been the proper course to pursue under the circumstances, which I supposed was sufficiënt to convince the Brother that he had erred, but to my surprise he attempted to justtfy his course, and to the queslion put by me to him, whether under similar circumstances he would act in the same manner again, he answered he would. I then informed the W. P. Master Bro. Folger, that I should bring the subject before this Grand Body for consideration. I also charged the Lodge to proceed no further,—(Report filled up here verbally,) that he had. I asked where ? *********** which I also decided was highly improper; I then called on the Lodge toapprove or disapprove said proceedings; they did disapprove by an unanimous vote. ]\Iany other remarks were made on the occasion referred to, but 1 deem the foregoing sufficiënt at this time, and beg leave respectfully to submit them for your consideration,

The W. Bro. Folger made some remarks in explanation, but after some progress, was reminded by the Kt. W. D. G. Master, that there was no motion before the body. On motion, Resolved that the report of the D. G. M. be accepted. The W. Bro. Folger then gave his statement of the circumstances which took place in T. R. A. Lodge, No. 2. Several Brothers made enquiries in relation to the statements made ; various propositions were offered and discussed, after which the following resolution was adopted:

Resolved, That the report of the R. W. D. G. M. Bro. Willis, in re/erence to the conduct of W. Bro. Folger, of No. 2, be referred to a special coininittee of five, with powers to send for persons and papers, to report thereon at the next annual meeting of this Grand Lodge.

The committee to whom [he above resolution was referred by the Grand Lodge, consists of W. Brothers Phillips, Millar, Faron, Satterthwaite, and Rockwell.

The W. Bro. Folger asked permission to be heard before the committee by counsel. A motion was made and seconded that his request be granted, whereupon an anima-