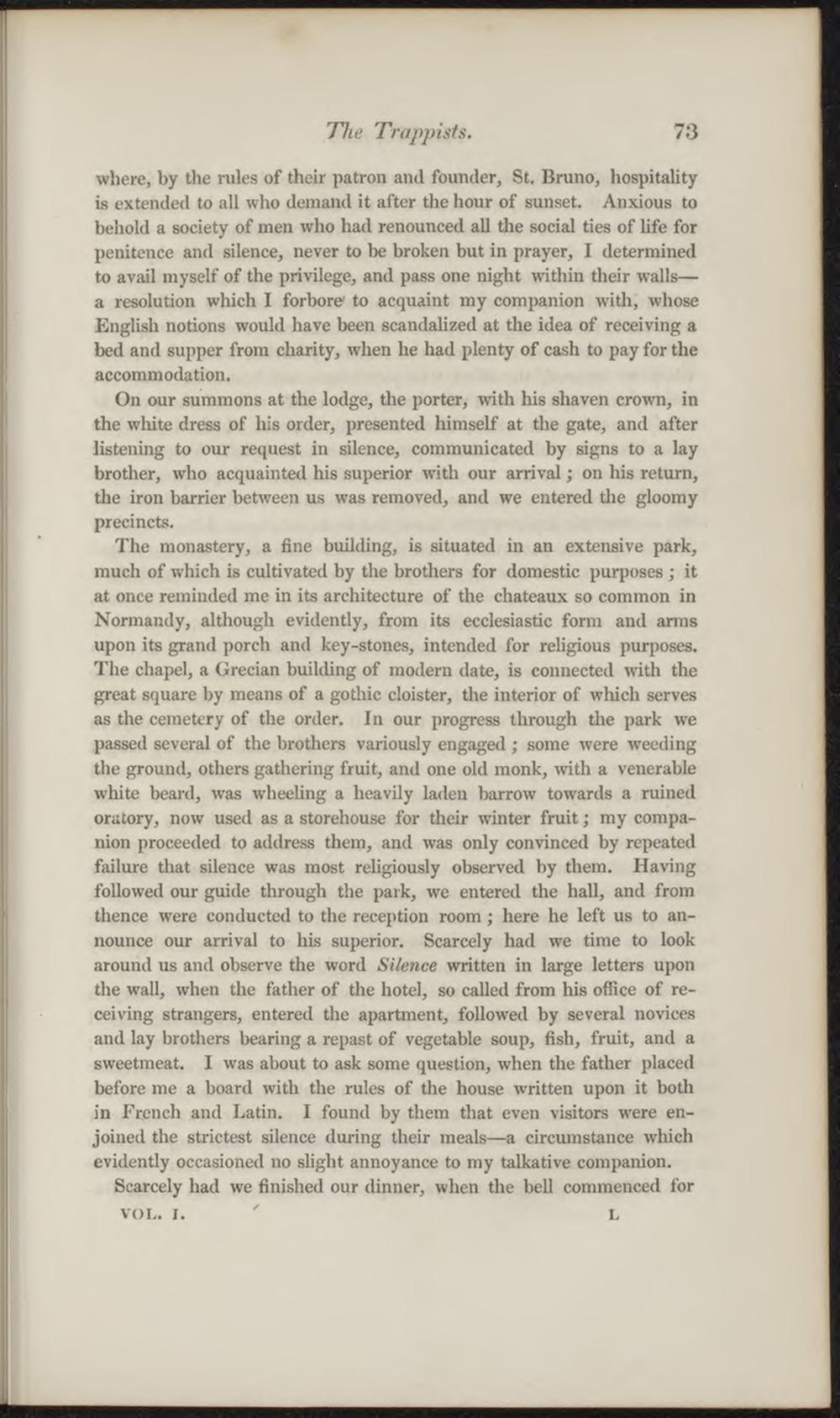 wliere, by the rules of their patron and founder, St. Bruno, hospitality is extended to all who demand it after the hour of sunset. Anxious to behold a society of men who had renounced all the social ties of life for penitence and silence, never to be broken but in prayer, I determined to avail myself of the privilege, and pass one night within their walls— a resolution which I forbore" to acquaint my companion with, whose English notions would have been scandalized at the idea of receiving a bed and supper from charity, when he had plenty of cash to pay for the accommodation.

On our summons at the lodge, the porter, with his shaven crown, in the white dress of his order, presented himself at the gate, and after listening to our request in silence, communicated by signs to a lay brother, who acquainted his superior with our arrival; on his return, the iron barrier between us was removed, and we entered the gloomy precincts.

The monastery, a fine building, is situated in an extensive park, rauch of which is cultivated by the brothers for domestic purposes ; it at once reminded me in its architecture of the chateaux so comraon in Normandy, although evidently, from its ecclesiastic form and arms upon its grand porch and key-stones, intended for religious purposes. The chapel, a Grecian building of modern date, is connected with the great square by means of a gothic cloister, the interior of which serves as the cemetery of the order. In our progress through the park we passed several of the brothers variously engaged ; some were weeding the ground, others gathering fruit, and one old monk, with a venerable white beard, was wheeling a heavily laden barrow towards a ruined oratory, now used as a storehouse for their winter fruit; my companion proceeded to address them, and was only convinced by repeated failure that silence was most religiously observed by them. Having followed our guide through the park, we entered the hall, and from thence were conducted to the reception room; here he left us to announce our arrival to his superior. Scarcely had we time to look around us and observe the word Silence written in large letters upon the wall, when the father of the hotel, so called from his office of receiving strangers, entered the apartment, followed by several novices and lay brothers bearing a repast of vegetable soup, fish, fruit, and a sweetmeat. I was about to ask some question, when the father placed before me a board with the rules of the house written upon it both in French and Latin. I found by them that even visitors were enjoined the strictest silence during their meals—a circumstance which evidently occasioned no slight annoyance to my talkative companion.

Scarcely had we finished our dinner, when the bell commenced for VOL. I. ' L