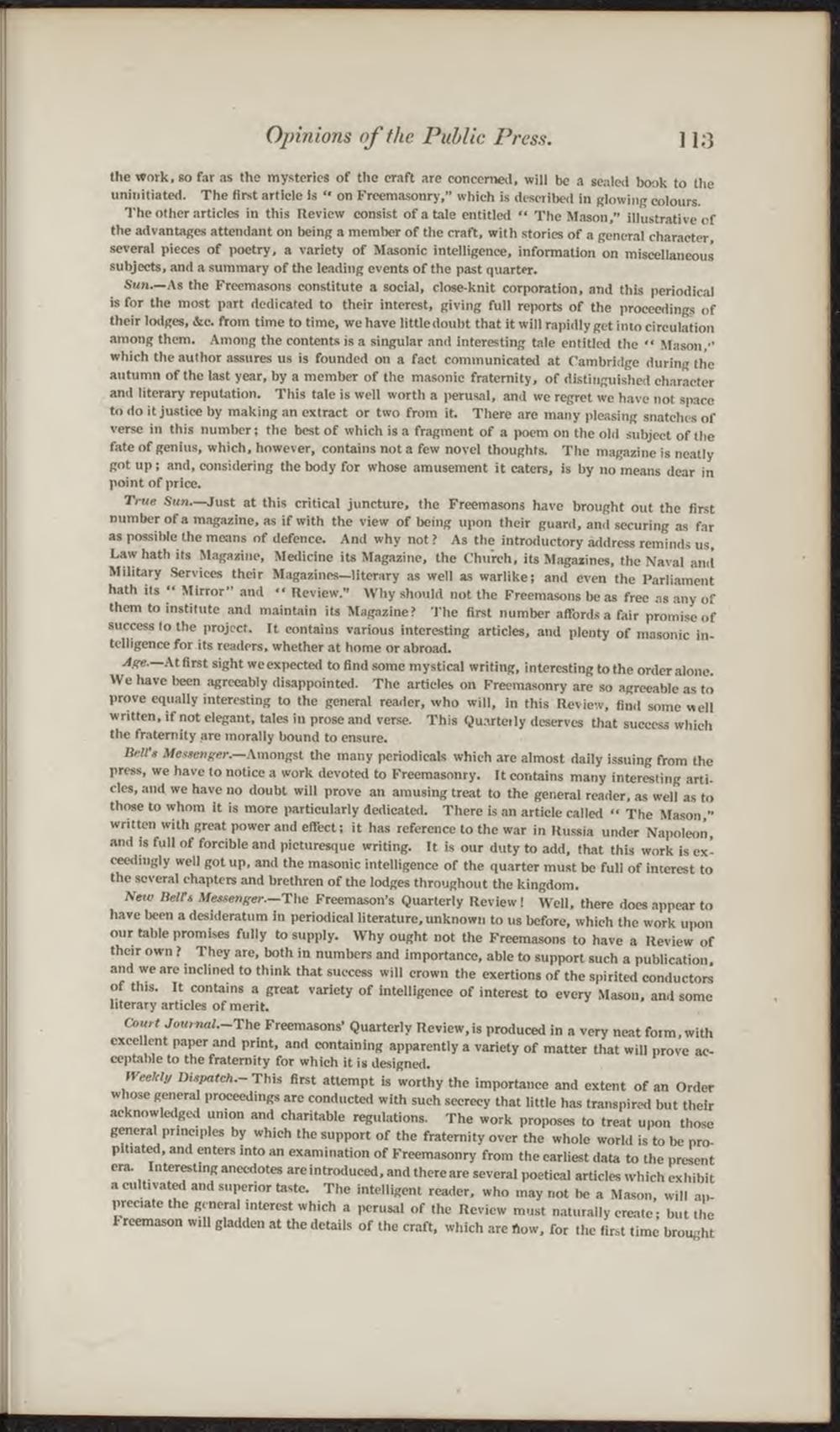 the work, so far as the mysteries of the craft are concerned, will be a sealed book to the uninitiated. The flrst artiele is " on Freemasonry," whieh is deseribed in glowing colours.

The other articies in this Ileview consist of a taie entitled " TheMason," iilustrative of the advantages attendant on being a member of the craft, with stories of a genera! charaeter several pieces of poetry, a variety of Masonic inteliigenee, information on miscellaneous subjects, and a summary of the leading events of the past quarter.

Sun—As the Freemasons constitute a social, close-knit Corporation, and this periodicai is for the most part dedicateil to their interest, giving full reports of the procecdings of their iodges, &c. from time to time, we have littledoubt that it will rapidly get into circulation among them. Among the contents is a singular and interesting tale entitled the '* Mason,'* which the author assures us is founded 011 a fact cominunicated at Cambridge during the autumn of the last year, by a member of the masonic fraternity, of distinguished charaeter and literary reputation. This tale is well worth a perusal, and we regret we have not space to do it justice by making an extract or two from it. There are many pleasing snatches of verse in this number; the best of which is a fragment of a poem on the old subject of the fate of genius, which, however, contains not a few novel thoughts. The magazine is neatly got up J and, considering the body for whose amusement it caters, is by 110 means dear in point of price.

True Sun—Just at this critical juncture, the Freemasons have brought out the first number of a magazine, as if with the view of being upon their guard, and securing as far as possihle the means of defence. And why not ? As the introductory address reminds us, Law hath its Magazine, Medicine its Magazine, the Church, its Magazines, the Naval and Military Services their Magazines—literary as well as warlike; and even the Parliament hath its " Mirror" and '• Review." Why should not the Freemasons be as free as any of them to institute and maintain its Magazine? The first number affords a fair promise of success to the project. It contains various interesting articies, and plenty of masonic inteliigenee for its readers, whether at home or abroad.

Jge—At first sight weexpected to find some mystical writing, interesting to the order alone. We have been agreeably disappointed. The articies on Freemasonry are so agreeable as tó prove equally interesting to the general reader, who will, in this Review, find some well written, if not elegant, tales iu prose and verse. This Quarteily deserves that success which the fraternity are morally bound to ensure.

Beits Messenger.—Amongst the many periodieals which are almost daily issuing from the press, we have to notice a work devoted to Freemasonry. It contains many interesting arti. cles, and we have no doubt will prove an amusing treat to the general reader, as well as to those to whom it is more particularly dedieated. There is an artiele called " The Mason," written with great power and effect; it has reference to the war in Kussia under Napoleon, and is full of forcible and picturesque writing. It is our duty to add, that this work is exeeednigly well got up, and the masonic inteliigenee of the quarter must be full of interest to the several ehapters and brethren of the lodges throughout the kingdom.

New Beits Messenger— The Freemason's Quarterly Review! Well, there does appear to have been a desideratum in periodicai literature, unknown to us before, which the work upon our table promises fully to supply. Why ought not the Freemasons to have a Review of their own ? They are, both in numbers and importance, able to support such a publication and we are inclined to think that success will crown the exertions of the spirited conductors of this. It contains a great variety of inteliigenee of interest to every Mason, and some literary articies of merit.

Court Jotit-nal.—The Freemasons' Quarterly Review, is produced in a very neat form.with excellent paper and print, and containing apparently a variety of matter that will prove aeceptable to the fraternity for which it is designed.

Weelcly Dispatch.- This first attempt is worthy the importance and extent of an Order whose general proceedings are conducted with such seereey that little has transpired but their aeknowledged umon and charitable regulations. The work proposes to treat upon those general principles by which the support of the fraternity over the whole world is to be propitiated, and enters into an examination of Freemasonry from the carliest data to the present era. Interesting anecdotes areintroduced, and there are several poetical articies which exhibit a cultivated and superior taste. The intelligent reader, who may not be a Mason, will a.preciate the general interest which a perusal of the Review must naturally ereate: but the

reemason Wl11 gladden at the details of the craft, which are (low, for the first time brought