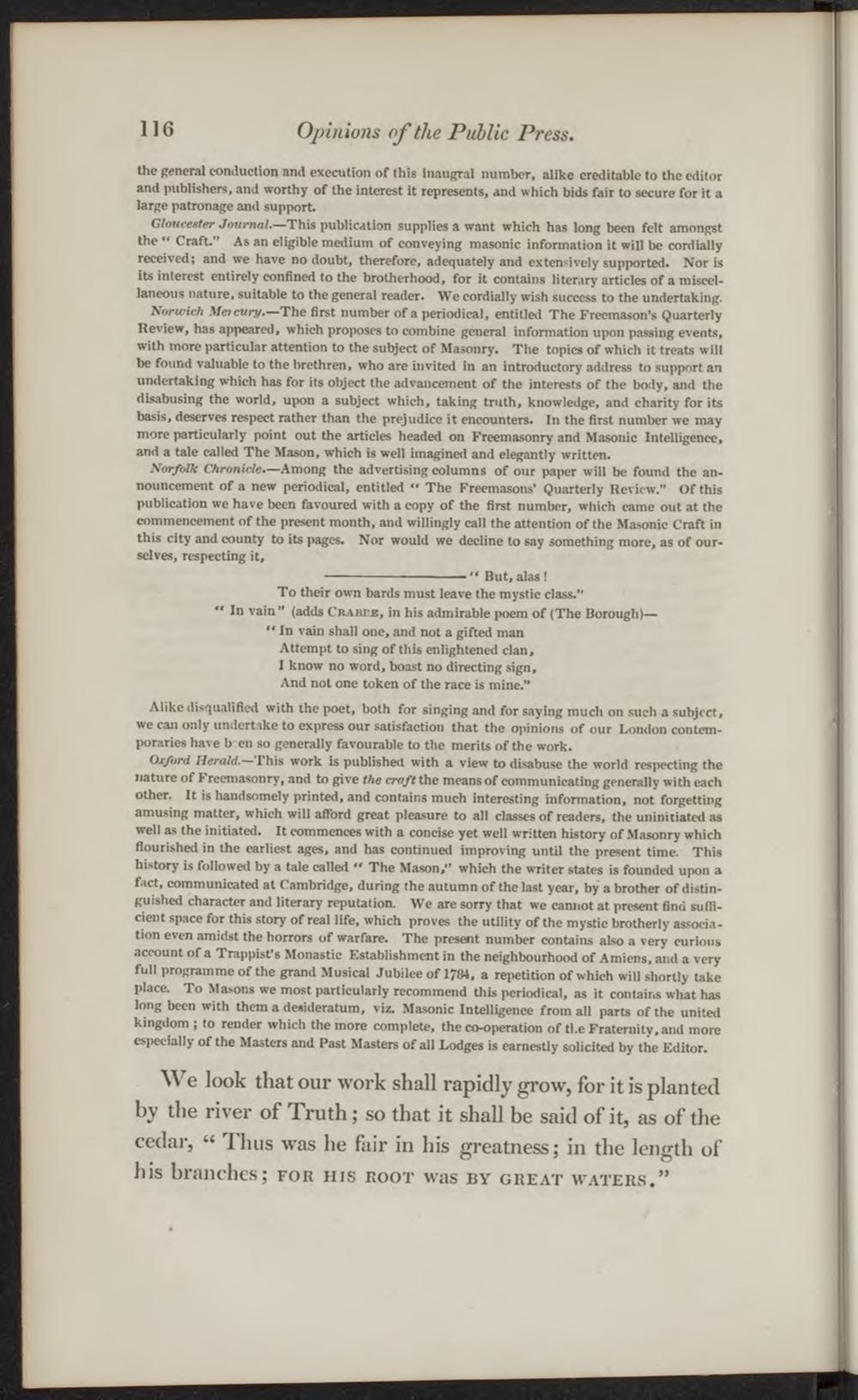 the general conduction and execution of this inaugral number, alike creditable to the editor and publishers, and worthy of the interest it represents, and which bids fair to secure for it a large patronage and support

Gloucester Journal.—This publication supplies a want which has long been feit amongst the " Craft.' As an eligible medium of conveying masonic information it will be cordially received; and we have no doubt, therefore, adequately and ex ten si vel y supported. Nor is its interest entirely eonfined to the brotherhood, for it contains literary articles of a miscellaneous nature, suitable to the general reader. We cordially wish success to the undertaking.

Norwich Metcury.—The first number of a periodical, entitled The Freemason's Quarterly Review, has appeared, which proposes to combine general information upon passing events, with more particular attention to the subject of Masonry. The topics of which it treats will be found valuable to the brethren, who are invited in an introductory address to support an undertaking which has for its object the advancement of the interests of the body, and the disabusing the world, upon a subject which, taking truth, knowledge, and charity for its basis, deserves respect rather than the prejudice it encounters. In the first number we may more particularly point out the articles headed on Freemasonry and Masonic Intelligence, and a tale called The Mason, which is well imagined and elegantly written.

Norfolk Chronicle.—Among the advertising columns of our paper will be found the announcement of a new periodical, entitled " The Freemasons' Quarterly Revicw." Of this publication we have been favoured with a eopy of the first number, which came out at the commencement of the present month, and willingly call the attention of the Masonic Craft in this city and county to its pages. Nor would we decline to say something more, as of ourselves, respecting it,

To their own bards must leave the mystic class."

" In vain" (adds Crabejb, in his admirable poem of (The Borough)—

" In vain shall one, and not a gifted man Attempt to sing of this enlightened clan,

And not one token of the race is mine."

Alike disqualified with the poet, both for singing and for saying much on such a subject, we can only undertake to express our saüsfaction that the opinions of our London contemporaries have b en so generally favourable to the merits of the work.

Oxford ilerald. Ihis work is published with a view to disabuse the world respecting the nature of Freemasonry, and to give the craft the meansof communicating generally with each other. It is handsomely printed, and contains much interesting information, not forgetting amusing matter, which will afförd great pleasure to all classes of readers, the uninitiated as well as the initiated. It commences with a concise yet well written history of Masonry which flourished in the earliest ages, and has continued improving until the present time. This history is followed by a tale called " The Mason," which the writer states is founded upon a fact, communicated at Cambridge, during the autumn of the last year, by a brother of distinguished character and literary reputation. We are sorry that we cannot at present find sufficiënt space for this story of real life, which proves the utility of the mystic brotherly association even amidst the horrors of warfare. The present number contains also a very curious account of a Trappist's Monastic Establishment in the neighbourhood of Amiens, and a very full programme of the grand Musical Jubilee of 1784, a repetition of which will sliortly take place. To Masons we most particularly recommend this periodical, as it contains what has long been with them a deuideratum, viz. Masonic Intelligence from all parts of the united kingdom ; to render which the more complete, the co-operation of tl.e Fraternitv.and more especially of the Masters and Past Masters of all Lodges is earnestly solicited by the Editor.

We look that our work shall rapidly grow, for it is planted by the river of Truth; so that it shall be said of it, as of the cedar, " 1 hus was he fair in his greatness; in the length of his branches; for his koot was by great waters."