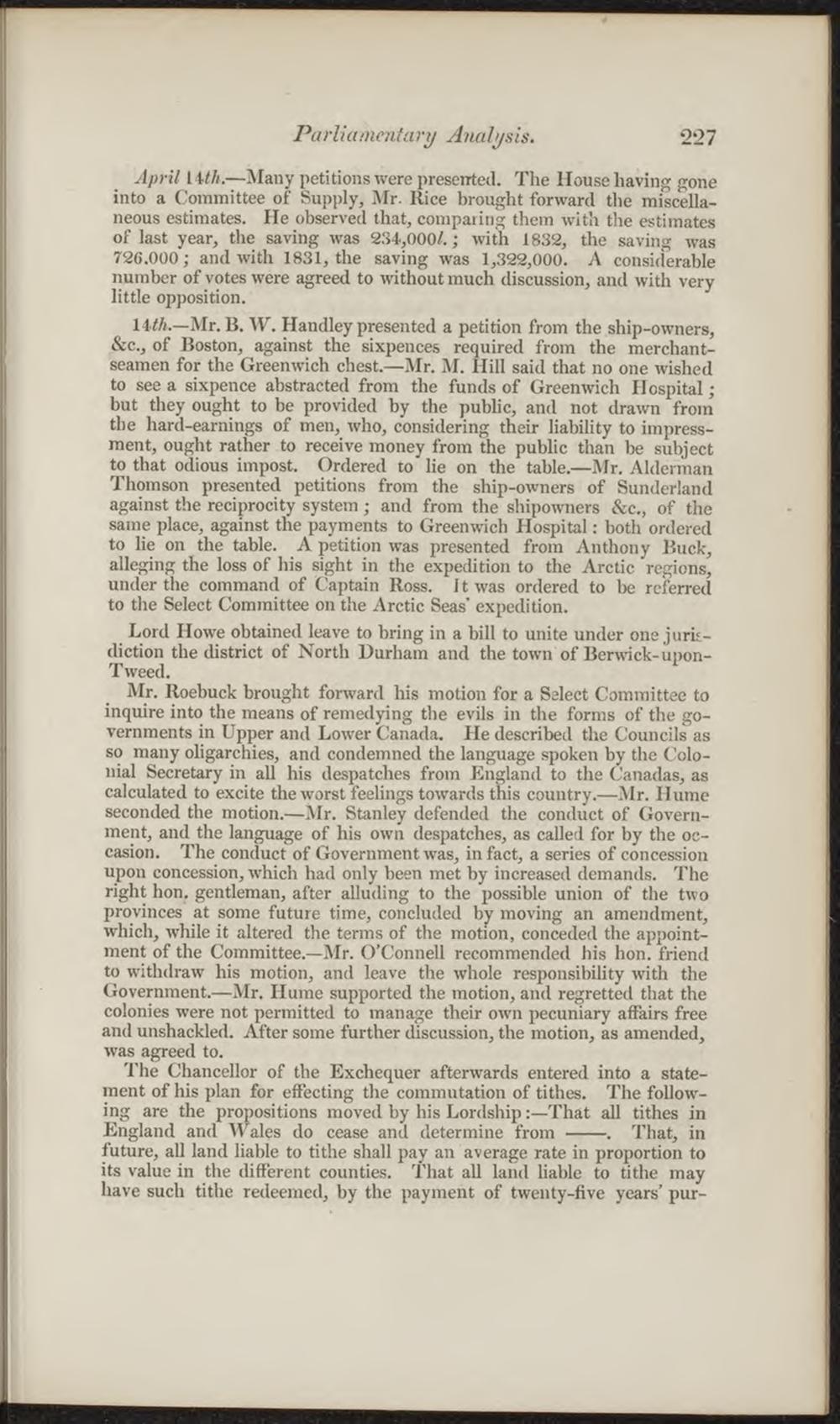 April 14th.—Many petitions were presented. The House liaving gone into a Committee of Supply, j\Ir. llice brought forward the miscellaneous estiraates. He observed that, comparing them wit'a the estimates of last year, the sa ving was 234,000/.; with 1832, the sa ving was 726.000; and with 1831, the saving was 1,322,000. A considerable number of votes were agreed to without much discussion, and with very little opposition.

14tt.—Mr. B. W. Handley presented a petition from the ship-owners, &e., of Boston, against the sixpences required frora the merchantseamen for the Greenwich ehest.—Mr. M. Hill said that no one wished to see a sixpence abstracted from the funds of Greenwich Hospital; but they ought to be provided by the public, and not drawn from tbe hard-earnings of men, who, considering their liability to impressment, ought rather to receive money from the public than be subject to that odious impost. Ordered to lie on the table.—Mr. Alderman Thomson presented petitions from the ship-owners of Sunderland against the reciprocity system; and from the shipowners &c., of the same place, against the payments to Greenwich Hospital: both ordered to lie on the table. A petition was presented from Anthony Buck, alleging the loss of his sight in the expedition to the Arctic regions, under the command of Captain Ross. 11 was ordered to be referred to the Select Committee on the Arctic Seas' expedition.

Lord Ilowe obtained leave to bring in a bill to unite under one jurudiction the district of North Durham and the town of Berwick-uponT weed.

Mr. Roebuck brought forward his motion for a Select Committee to inquire into the means of remedying the evils in the forms of the governments in Upper and Lower Canada. He described the Councils as so many oligarchies, and condemned the language spoken by the Colonial Secretary in all his despatches from England to the Canadas, as calculated to excite the worst feelings towards this country.—-Mr. Hume seconded the motion.—Mr. Stanley defended the conduct of Government, and the language of his own despatches, as called for by the occasion. The conduct of Government was, infact, a series of concession upon concession, which had only been met by increased demands. The right hon. gentleman, after alluding to the possible union of the two provinces at some future time, concluded by moving an amendment, which, while it altered the terms of the motion, conceded the appointment of the Committee.—Mr. O'Connell recommended his hon. friend to withdraw his motion, and leave the whole responsibility with the Government.—Mr. Hume supported the motion, and regretted that the colonies were not permitted to manage their own pecuniary affairs free and unshackled. After some further discussion, the motion, as amended, was agreed to.

The Chancellor of the Exchequer afterwards entered into a statement of his plan for effecting the commutation of tithes. The following are the propositions moved by his Lordship:—That all tithes in

England and Wales do cease and determine from . That, in